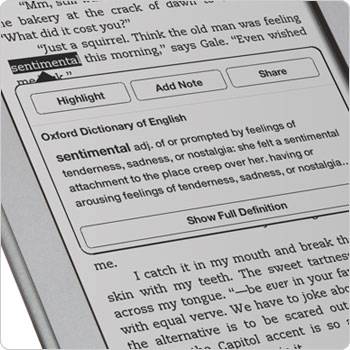 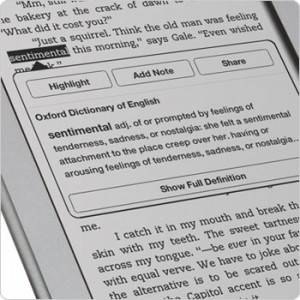 As word/tech geeks and (other) followers of Book Riot’s Facebook page know, Amazon on Thursday announced its new Kindle Serials, books released in an episodic format that could allow authors to modify their writing as they go based on reader (and buyer) response. After redefining how books are sold, published, and read, could this now change the way in which they are written, too?

And so, the ongoing impact of e-books on the overall book experience is such that when I saw this “news” item—“New Kindle to feature words that don’t even exist yet”—come across my desktop the next day, I had to click and start reading before I realized I was actually looking at Britain’s version of The Onion:

“The new Kindle will be able to display words like ‘nuqjatlh’ or ‘jIyajbe’ which we predict won’t come into use until some time in the early 24th century,” said Amazon chief executive Jeff Bezos at a special launch event in California.

Sure, I blame the subtlety of British “humour” for my initial gullibility, but it’s funny precisely because it’s almost, probably soon to be true. The advent (and eventual near-takeover) of e-books will have a dramatic effect not just on how we read, but how we see words—literally and psychologically. I’m reminded of a radio commentary I heard last year by the poet and novelist Andrei Codrescu. Really, it’s worth listening to the entire thing in his wonderfully erratic Romanian accent, but here’s the heart of it:

I’m reading a new book I downloaded on my Kindle and I noticed an underlined passage. It is surely a mistake, I think. This is a new book. I don’t know about you, but I always hated underlined passages in used books. They derail my private enjoyment with somebody’s perception of what’s important, something moronic, usually, which is why I always prefer buying books new so I could make my own moronic marks. But moronic or not, it was all between me and my new book.

And this thing on my Kindle is supposed to be new. And then I discovered that the horror doesn’t stop with the unwelcomed presence of another reader who’s defaced my new book. But it deepens with something called view popular highlights, which will tell you how many morons have underlined before so that not only you do not own the new book you paid for, the entire experience of reading is shattered by the presence of a mob that agitates inside your text like strangers in a train station.

I’ve often thought the same thing to be true of Kindle’s dictionary function—which gives you a quick definition, the most common one, of the highlighted word (and requires an extra step to explore other meanings). This could disrupt the author’s intent in using a certain word in a more subtle way and certainly interrupts the process of learning new words or gleaning new meanings through context. Perhaps I’m overstating this one point, but we can imagine where this might be headed. And when used to its full extent, the dictionary app is, well, a dictionary—and that’s not a bad thing.

Meanwhile, the fears that crowd-sourcing could crimp writers’ creative styles would also apply to choices about individual word as well as to full paragraphs, plotlines, and characters. More or less? Simpler or more sophisticated? Better or worse? We’ll just have to see. Whatever the effect, there will probably be a new word for it.