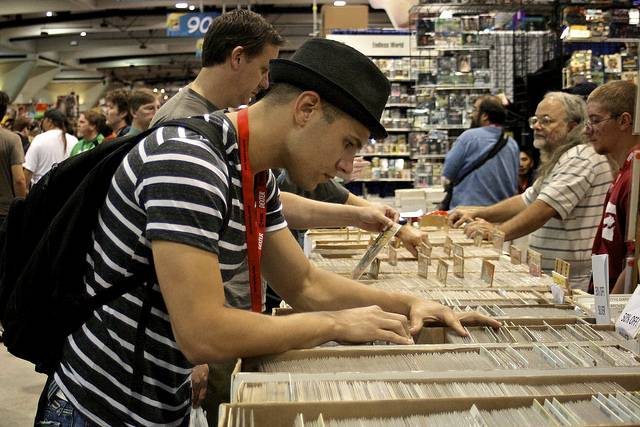 Imagine, if you will, the big game hunter. Rifle slung over his shoulder, full safari get-up, right down to the handlebar mustache and tiger’s claw necklace hung around his neck.

Now… picture him under the harsh fluorescent lights of your local super market, ears once trained to detect the slightest movement in the brush, now forced to endear a Musak version of Paul Simon’s Graceland album.

He reaches into the refrigerated display and pulls out a pink lump of meat, molded to a styrofoam tray and sealed in plastic wrap. Ground beef. It’s lean. Grass-fed even. He pushes a thumb against the plastic wrap, stares at the imprint left by the pressure.

It could make a good meal. He would eat well.

But, he thinks, where’s the sport in that?

That big game hunter, all embellishments aside? He’s a bit what it means to be a comic book collector today.

Panels is all about reading comics. Loving comics. Celebrating comics. It’s a wonderful mission statement, and I’ve long considered myself a comics reader more than I am a collector. I don’t bag my comics in mylar bags. I may have even rolled up a comic recently to better carry it in my back pocket.

But… being a collector doesn’t mean keeping a pristine collection. It’s not just the stuffed trophy in the big game hunter’s drawing room, no… it’s about the hunt itself.

And I had forgotten that aspect of the hunt. You might say I was a retired hunter, watching game shows on television, mowing the lawn, and cooking burgers on a gas grill on the weekends.

In comic book terms, I was happily buying trade paperback collections and digital back issues. I even signed up for Marvel Unlimited to give myself a huge backlog of digital comic books to read at my leisure. And the truth is, most of the comic books truly worth collecting have been made available in one of these formats.

It wasn’t always this way.

When I began reading comic books, they were on a spinner rack at the drug store. I’d rifle through issues, with no connection to issue numbers or the beginnings or endings of story arcs. I’d just appraise the art, look for the best illustrations, the most bad-ass fight scenes.

And then I started getting sucked into the stories, and I realized that the immense backstory of these characters existed in print. Somewhere. Out there.

The comic book store was my first safari. I remember the trip to the mall… it was Comics & Comix at a place called Birdcage Walk in Citrus Heights, California. A store dedicated to housing the rare and exotic backstories of the X-men, Spider-man, and more.

And… it wasn’t the only comic book store out there. In fact, Comics & Comix had stores stretching down the California coast.

In the 1990s, living in Berkeley, California, I had access to dozens of comics shops. True, this was the boom time; variant covers and gimmicky stunts were drawing many more hunters into the game. But the thrill for me was not the value of a hologram cover. I would spend days traveling around comic books stores from Alameda to Richmond to Walnut Creek, rummaging through back-issue bins and — my personal favorite — the quarter bins. I was obsessed with putting together runs of comic books I had read in small, irregular chunks as a kid. Or had always wanted to read. An entire run of DC Comics Blue Devil at roughly a quarter a book? Yep, that was me, buying those.

Then the boom went bust, and many of those comic book stores shuttered their windows. They had gambled on those variant covers, and the $37.50 I had dropped on Arion: Lord of Atlantis just wasn’t going to keep most of those guys afloat.

Today it’s just as easy for me to recommend that you all go buy Matt Wagner’s superlative 90s run of Sandman Mystery Theater at your local book shop or via ComiXology. It’s all there, easy to read, great for your bookshelf.

And, you know, I didn’t think I missed the hunt.

Until Paul Montgomery, our trusted Editor-in-Chief, mentioned writing a piece on books by writer Greg Rucka. And I immediately remembered a favorite of mine — his Batman/Huntress: Cry for Blood. But so what…? It’s on Amazon, right?

Except that this message happened to come while I was at the San Diego Comic-Con International. Which is to say — I was on safari. The idea was simple — oh, I remember that series. I’d like to re-read it. Hey, I’m at Comic-con! I’ll just track it down.

I suspect if you had seen me that day, I wouldn’t have recognized you. The game was afoot. The crowds receded as I made my way to the comic book reseller side of the convention. Surely, I would find it. I just had to work my way through dozens of resellers with boxes of dollar comics, back issues,  and disorganized discount trade paperbacks.

I didn’t need the series to display. I didn’t even need it on a shelf or even in a box. I wanted to read it, but… perhaps even more importantly, I wanted to find it.

It went as these things often did; I did find a couple issues, but not the complete set. I left empty-handed.

And then I went home and downloaded the entire series from ComiXology at $1.99 a pop.

Because after a long and fruitless hunt, I was really hungry.

I needed a good meal.

And it was delicious.