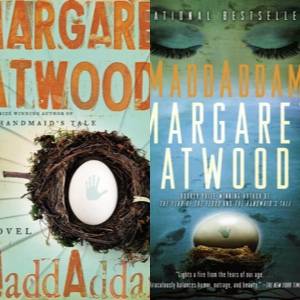 This post first appeared on Panels. Check them out for more comic book goodness!

The MaddAddam Trilogy were the first Margaret Atwood books that I read. I devoured Oryx and Crake, Year of the Flood, and MaddAddam in rapid succession. It is a story about a bleak future in which genetic engineering and a vapid focus on vanity science have wiped out most of humanity. What few remain must contend with scientifically-enhanced animals, a new and superior form of homo erectus, and the foul nature of humans without laws. Atwood quickly ascended into the ranks as one of my favorite authors.

As Hollywood is beavering away at an HBO adaptation of Atwood’s trilogy, the books are gaining more attention. Of course, if you already read it, you can read it again, or you can delve into some comic books that throw off a great MaddAddam vibe.

In Y: The Last Man, a mysterious “plague” has wiped nearly all male mammals from the face of the Earth, leaving the women facing certain extinction. As the apparent last surviving male human, Yorick, much like the Crakers in MaddAddam, represents the future and the hope to survive. Women alone are not enough to continue humanity, and so Yorick’s existence is the last bastion of hope. Much like MaddAddam, science and its (mis)uses are a marquee theme in Y: The Last Man, along with a light at the end of the apocalyptic tunnel.

Kamandi: The Last Boy on Earth by Jack Kirby

The vision of Earth in Jack Kirby’s Kamandi: The Last Boy on Earth could be seen as a possible fast-forward of Atwood’s MaddAddam future, even though Kamandi predates MaddAddam by more than 40 years. A great calamity has occurred and while animals have gained sentience and great intelligence, the few remaining humans have devolved into slave labor and pets. As with MaddAddam, science has again proven to be mankind’s hubris and inevitable downfall and Kamandi fights to help his fellow humans regains their freedom.

Superman: At Earth’s End by Tom Veitch and Frank Gomez

For those who want more traditional superheroes in their apocalypse, Superman: At Earth’s End is right up your alley. The story is actually a sequel to Kamandi: At Earth’s End, a succinct retelling of Kirby’s original Kamandi series. Again, science has run rampant and now cyborgs are overseeing the revamping of Earth. Of course, their brand of revamping involves laying waste with nuclear weapons. What follows is massive romp featuring monsters, robots, Hitler clones, an epic beard, and a tragic end for the world’s greatest superhero.

Years after a meteor strike has wiped out most life on Earth, five groups of young Japanese people awaken from cryogenic slumber to find a world greatly changed. As the only apparent human survivors, they must find ways to not only survive, but to kick-start the human race. They know nothing of the world as it is, but only what knowledge they had before their deep freeze and the tools left for them. 7 Seeds is, in many ways, a reverse of MaddAddam. The world of 7 Seeds has moved on without humans, finding its own paths and evolving on its own. Humans are the new species, trying to fight a way to fit into a new ecosystem with their bare-bones science.

Nausicaä of the Valley of the Wind by Hayao Miyazaki

Nausicaä of the Valley of the Wind is the closest of these comics to MaddAddam. It deals with a world torn asunder by science and still trying to fight back the effects of their “advanced” progenitors. Miyazaki’s masterpiece is set in a post-apocalyptic world where advanced, bio-engineered forests and insects are encroaching on the last remaining human settlements. Nausicaä is a princess who struggles to come of age and fights to save humanity from biological threats, war, and humanity’s own hubris.