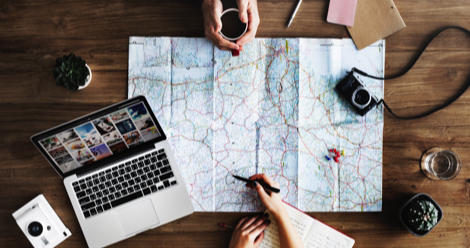 There are many reasons why you might enjoy reading certain books: the writing style, intricate plots, well-developed characters. One factor that I think is particularly important (maybe because I’m a geographer) is the setting of the story: place can become a character, and in certain kinds of books, the setting is an integral part of the story.

When I was completing research for my PhD, I interviewed readers and asked them what they enjoyed about the books they read. The story’s setting came up more than once, with one participant saying, “It’s nice actually when they’re set in somewhere you do know. I don’t mind where they’re set, but when they’re set somewhere and I go, ‘Ooh, I know that.’” This participant was talking about fiction generally, but there is a particular genre that I think is particularly suited to acting as a kind of travel guide: crime fiction.

One participant I interviewed spoke about owning all of the books by Robert B. Parker, an American novelist. The reason he had them all, he explained, was because “I went on sabbatical to Boston and all his books are set in Boston and I wanted to walk around Boston being guided, treating the book as a guidebook, even though it’s a crime novel. So I had to buy them.” I asked him what the experience was like of using a crime novel as a guidebook as opposed to the more traditional Lonely Planet or Rough Guide, and he said, “I enjoyed it very much, especially going to the restaurants where he ate or having a martini in the bar of the hotel…Parker knows Boston. So every one of his books is set in Boston, the real names of the streets are there, I went and looked in the windows [of] Parker’s office, because it’s on the corner of Boylston and another street. So that was just terrific, really brought it to life.”

We spoke about other crime fiction writers who use place in similar ways: “Peter Temple is a bit like that about Melbourne, he mentions the specific streets he’s in, also specific towns. So a book, a novel doesn’t have to be like that, but it’s enjoyable when it is.” Likewise, JK Rowling/Robert Galbraith used London in the Cormoran Strike series: “Tottenham Court Road, which is where I used to work. So it was very familiar to me.” This participant told me he enjoyed reading books where he knows the setting: “I like the realism, of having genuine settings that I have been to.”

Crime fiction, more than any other genre that I have read, uses place and space as a fairly integral part of the story. This, I suspect, is largely in how the mystery and plot unfolds, and how the setting is often a crucial factor or clue in solving a crime. Details matter in solving mysteries, and the scene of the crime is a fairly large detail. The minutiae of place also transports the reader, and the level of detail provided in many crime fiction novels help take you there—you can imagine the route driven by police as they chase a suspect, see the abandoned warehouse at a certain intersection in a specific city, walk the steps alongside the killer as they plot their next move.

As a result, you as a reader can build a fairly intimate picture of a place you have never actually seen, thanks to descriptions and the use of specific street names and landmarks, or perhaps a map that is provided at the beginning of the novel. If you ever visit those cities, you can imagine these fictional killers and heroes; the crimes that took place, the offices and homes where the mysteries were solved, the streets on which these characters walked. I’ve often thought that my most intimate knowledge of New York City comes not from Friends or How I Met Your Mother, or even from actually visiting the city, but instead comes from Jeffery Deaver’s Lincoln Rhyme series and Linda Fairstein’s Alexandra Cooper novels. The streets of Manhattan, for me, are not about love lives, young professionals, and close groups of friends, and nor are they about tourist destinations and attractions. Instead, they are where forensic evidence is painstakingly gathered, witnesses are interviewed, and where the bad guys are always caught.

And so, if I ever visit a place that happens to be the setting of a crime novel I have read and loved, I know that that book will be my guide, moreso than a Lonely Planet or some Yelp! reviews. There is something about crime fiction that brings places to life, and if given the chance to embark on this kind of literary tourism, I will happily take it. Bring on the (fictional) bad guys.