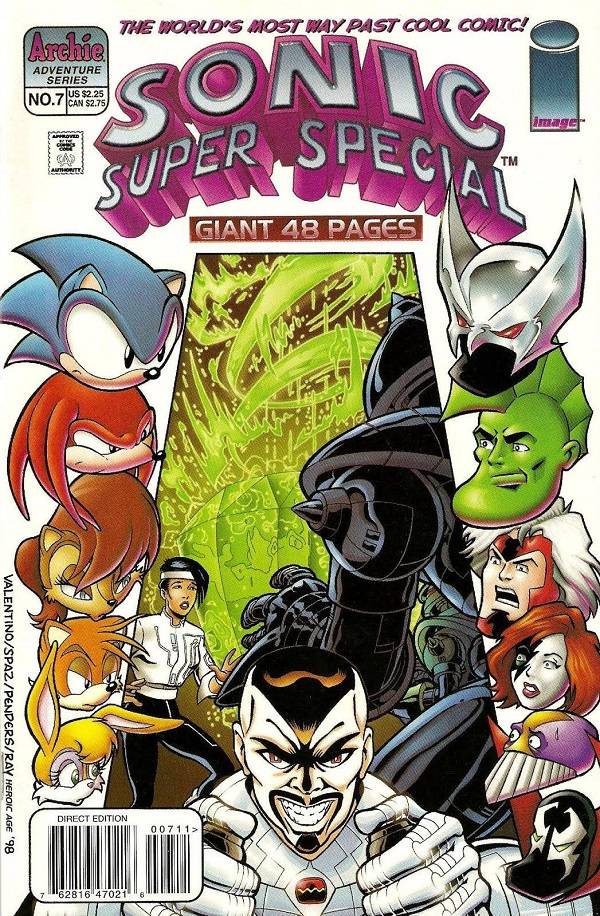 The comic intercompany crossover is a relatively rare thing. Although their publisher-specific cousins have become more and more common over the years, what with Spider-Man constantly hanging out with the rest of the Marvel Universe and Superman not only headlining a title with Batman but another with Wonder Woman, the stories that throw characters from different universes together are still worthy of attention. It’s still an event when direct competitors come together to publish a single product.

1998’s Sonic Super Special #7 is one such product. It was the first, and only, time Sonic the Hedgehog and his friends interacted with characters from the Image Comics stable including the undead superhero, Spawn.

Sonic the Hedgehog was riding a fairly popular wave in the 1990s. Debuting in the summer of 1991, Sonic was created to be the face of the Sega Corporation, a video game publisher. Their main rival in both hardware and software was Nintendo, who had for years made the Brooklyn plumber Mario their mascot. A blue hedgehog was Sega’s response. Sonic, who wore red running shoes and traveled at high speed, was a success from the beginning thanks to his popular game named, simply, Sonic the Hedgehog. Over time, Sonic gained supporting characters in his various sequel games. Among their number was a two-tailed fox named Tails, a lady hedgehog named Amy Rose, and an occasional ally in the form of Knuckles, a red echidna. Though a Japanese manga about Sonic was released in 1992, the license to tell his comic tales in the United States fell to Archie Comics in 1993.

Similarly, Image Comics rose to meteoric heights in 1992. Image was formed when a group of artists mostly known for their work with Marvel Comics left that company to start their own independent group. Their art made them among the most popular creators of their day and Image Comics quickly became a powerhouse in the industry. Each creator benefited from this success due to the fact that they each owned the characters they were drawing whereas Marvel owned all their earlier work. Among these creators and characters was Todd McFarlane and his creation, Spawn.

Spawn was a former CIA agent who was sent to Hell upon his death for his various sins. There, he arranged a deal that allowed him to return to Earth but only as an emotionally damaged, gritty hellspawn. He was all sharp edges, dark shadows, and angry growls. He hunted gangs, criminals, and pedophiles. Sonic, meanwhile, was all round circles, giant eyes, and blue hair. He mostly fought a bald, fat scientist named Dr. Eggman. The two couldn’t be more different. Yet, there they were together in a single comic book in 1998.

When beginning an intercompany crossover, certain creative choices have to be made almost immediately. Do these characters exist in the same world? Have they simply never run into each other before? Do they exist in alternate dimensions? If they do exist in alternate dimensions, how do they jump from one world to the other? Each story handles these basic plot elements differently, though many who choose to have their characters jump between worlds find that, for better or for worse, the entire story suddenly becomes about that one concept. How did the jump happen? How will the characters get home? It’s an oft-repeated plot point that was already old hat in 1998. Yet, Sonic Super Special #7 immediately opened with it.

The story began by abruptly focusing on a character readers had never seen before. This wasn’t some sort of talking rodent as a reader may have been expecting when opening a comic with Sonic the Hedgehog’s name on the cover. No, this was a human woman named Particle who was explaining to a pair of FBI agents how she had used a vibrational tuner to jump to a parallel universe. There, she ran into a group of colorful talking animals. These were, of course, Sonic and his various hangers-on.

The decision to have Particle be the person we’re hearing the story from is a strange one. Considering this was a crossover between Sonic’s universe and the characters in the Image comics, starting off with a character readers were familiar would have made sense. However, Particle was brand new. She was actually an Image character created by Ken Penders, the writer of this issue. The only other spot she ever appeared in was the first issue of something called The Lost Ones that came out in 2000, a good two years after this story was published.

Anyway, after jumping around Sonic’s world for a while, and knocking out most of its cast, Particle landed upon a powerful Chaos Emerald guarded by Knuckles. She knocked the echidna out with a touch of her hand, which was apparently a mutant power of hers. After escaping back to her dimension with the Emerald, Knuckles, Sonic, and the gang teamed up to chase after Particle. With that, they got in a flying car, and jumped into the connected Image superhero universe, where they immediately landed in a dark alley and they ran into Spawn.

For a single page. In which Spawn uttered a single word.

And that’s the entirety of the Sonic / Spawn meet-up. They didn’t fight some villains together. They didn’t track down Particle and make her give back the Chaos Emerald together. They didn’t have a misunderstanding that lead to a battle that later got reversed when they realized that both of them were really heroes. They simply met in a dark alley and stared at each other. Spawn’s simple declaration of “No” is both a response to the question asked of him by Sonic and the unspoken question of, “Wanna team up and go on an adventure with me?”

Spawn is on the cover of the comic. He’s prominently displayed in the pin-up found in the middle of the issue. He was inarguably the biggest Image superhero at the time. And he was in two panels. I can’t imagine how angry that made some fans.

But, fear not! Spawn was only one of the several Image superheroes Sonic and company ran into during their time on Image Earth, or whatever designation the Image folks give their shared universe. Soon, Sonic became a minor character in his own comic as he began being crowded off the panel by the likes of Shadowhawk, Savage Dragon, Union, The Maxx, and Velocity.

All of these heroes were drawn in a slightly rounded style, which helped them mesh slightly better with Sega’s talking animal characters.

As the story progressed, it was revealed that Particle wasn’t the true villain of the piece. That honor fell to Dr. Druid, Particle’s arch nemesis whose only other appearance would be that same issue of The Lost Ones which featured Particle’s only other appearance. Eventually, all the heroes teamed up and took him down before he could collapse all the universes onto each other. Along the way, they also clashed with Druid’s collection of evil robots. It helped end things on a bang.

The final fight scene wasn’t particularly well choreographed. It happened chaotically over a series of a few crowded panels that were sort of smushed together at the issue’s end. Most of the characters were ill-defined at this point beyond the simple designation of “good guy” and “bad guy”. Spawn could have easily been slipped back into this final section to help make the promise of the cover come true. For whatever reason, he stayed back in that alley of his while everyone else brought the story to a happy ending.

But, there was one more crossover before the story’s end. Those FBI agents Particle was talking to at the issue’s beginning turned out to be Agents Mully and Scolder, two Mad Magazine-esque parodies of the main characters from The X-Files.

Strangely, the whole issue was dedicated to Chris Carter, the creator of The X-Files. At least that dedication fit with the “anything goes” nature of the story if not the tone of the thing.

As explained by the issue’s introduction written by the issue’s editor, Justin Garbie, the story came about because Jim Valentino, co-founder of Image Comics, had two young boys who loved the Sonic line of games. They asked their father to draw a pin-up of Sonic, which was soon published in one of the Hedgehog’s issues. The story goes that Valentino became so enamored of the little guy that he asked if he could draw a whole issue. Garbie hooked Valentino up with Ken Penders, who became the official writer of the issue, although Valentino helped work out the plot and helped get the okay from his fellow Image creators to use their characters. The story quickly enlarged from a simple Sonic story to a crossover between Sonic and most of Image’s superheroes. Eventually, Valentino penciled and inked the entire issue while Penders wrote it, Frank Gagliardo and Pat Spaziante colored it, and Jeff Powell lettered it.

Perhaps the most memorable thing about Sonic and Spawn’s meeting is how little page-time they spent together. Having the two of them spend page after page fighting evil robots together would almost seem pedestrian next to the issue’s actual bait-and-switch. But, here’s hoping a real crossover is put together at some point. I want to see more of the rounder, cuddlier version of Spawn this issue only hinted at.