Dear JKR, you messed up. We know it. You know it. The question is what will you do about it. I suspect not much.

Mind, this does not invalidate what you did with Harry Potter. The series was remarkable for its time: it created a generation of compassionate readers, who have learned to stand up and fight injustice. You had people of color who were not brutally killed in the original series. No black characters died. Your Indian characters had depth, and reason to find Harry a prat. And you gave us Cedric Diggory and Sirius Black. I can still look at Harry Potter, judge its flaws, and appreciate the impact. As I am drafting this, I am wearing a Harry Potter themed shirt, and have another in my closet.

You know how to write good characters. And yet, you have now stuffed a woman of color into the fridge. Rather, you changed her into a man-eating snake, gave her to your Big Bad, and created this creepy intimate relationship. It makes me feel vitriolic, visceral stuff. You have no excuse because you have written better.

The red flag should have been when you ignored Native Americans that pointed out that skin-walkers are a part of Navajo culture, a culture dying out due to most of the Navajo being exterminated. It’s one thing to borrow from cultures when talking about England, your home, but quite another to talk about another country. Then there’s the whole Johnny Depp thing, that he was cast after the domestic abuse allegations came out despite the fact that the courts found out he had abused his wife for being bisexual. Any comment should have been fine.

So, JKR, with all due respect to the good that you’ve done, we can acknowledge that you messed up on this one. For one, you have three Asian characters in Harry Potter, and all were designated as potential love interests to the heroes. Parvati Patil kicked ass, when she was onscreen, and Cho Chang showed a realistic reaction to trauma, in her boyfriend being brutally murdered. And you showed that there is no gender bias in terms of how you sympathetically portrayed characters; while Cho shouldn’t have sought out Harry to cope with her grief, Harry also messed up how things went between them. I was annoyed, and internalized that being Indian in a relationship with a magical hero wasn’t in the cards for me, but I accepted it because of the decent execution. 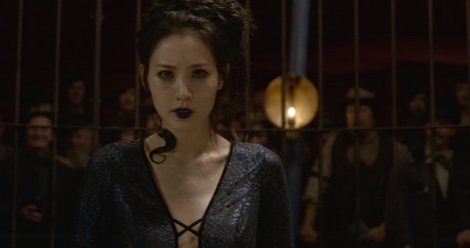 Nagini being a man-eating snake was acceptable when she was just a snake. As shown with most snakes in the series, they are influenced by bad people who can talk to them. Harry can order a snake to stop and it will listen, and Voldemort can ask a basilisk to murder. The only snake we’ve seen in the original Harry Potter series that seemed decent was the snake in the London Zoo that Harry accidentally released. Harry doesn’t want to use the gift he has, understandably, because it marks him as too similar to the man who murdered his parents. A giant basilisk tried to murder him in cold blood. Also, he seems to recognize the lack of consent involved with using such a creature.

Making Nagini once human means that her actions are morally unacceptable. Also, she has to be treated as a human being and not as a snake or a pet. And what does she do that would be judged by human standards? Eating the dead bodies of any person that Voldemort kills, biting a man and nearly killing him with her venom, enabling the Dark Lord to return to a human body, and serving as one of his soul jars. And if Neville murders Nagini on Harry’s last orders, he just killed a human woman unknowingly. That makes books four, five, and seven tainted with this revelation.

There is also the creepy image of Nagini being “milked” for her venom, so that Voldemort may have a sustainable body. Usually, milking a snake involves massaging glands on the sides of their head, so that the venom will be released into a vial. There is nothing sexual about it. But with the revelation that Nagini was a human woman, it creates an implication that she was nursing a baby Voldemort back to health. No one wants that image in their head. We were fine with what we had before!

The question is, what does this mean for the series? I stopped reading a long time ago, since for me the story ended with Deathly Hallows. Cursed Child was just bad, and Fantastic Beasts is not my thing. Obviously we can’t stop you from writing. We can judge you.

A good artist knows when to not add any more to a painting. A story should have the same. If you were going to pitch this idea, you should have had a sensitivity reader onboard who could have helped you refine the reveal to something less viscerally creepy. I’m not sure how to make it less creepy or messed up, but it should be possible. You convinced us a boy could fly on a broomstick and cheat death several times.

I will go now and find British fantasy authors that aren’t making me cringe with each new bit of news. In the meantime, you have to learn to listen. I hope that you learn.