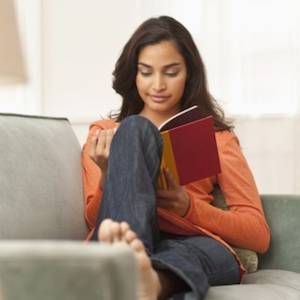 Before I start, it’s important to acknowledge that the thoughts I am about to share are not unique to me or my culture. And that as far as I can tell, this is an issue for many, many readers who identify in a variety of ways.

As a (South) Indian American girl, I’ve pretty much given up on finding books about people who are like me.

There are books, certainly. Growing up, I had books like Shiva’s Fire by Suzanne Fisher Staples, about a young Indian girl whose mystical connection to Bharatnatyam (a classical South Indian dance) leads her on an intriguing journey. Similarly, there are books like Padma Venkatraman’s A Time to Dance, about a girl who wants nothing more than to be a professional Bharatnatyam dancer. And too, there are books like Jhumpa Lahiri’s well-known The Namesake, or Born Confused by Tanuja Desai Hidier, which highlight the disconnect between immigrant generations.

I applaud these authors for bringing our culture to light, and for sharing the struggles that are a part of us. But I am frustrated, too. Because I am not like these characters. I learned Bharatnatyam as a child, but I was not in love with it. I was happy to spend my college years exploring literature from authors in the western canon as well as authors of different ethnicities. I am not completely in love with everything having to do with my parents’ native land and our culture. However, I am also rather resentful of characters like the ones in Jhumpa Lahiri’s stories, too — especially those who are second generation immigrants, like me. When I read about those characters, all I see are one-dimensional caricatures of who I am. I may not love everything about my culture, but that does not mean I am “confused” by it. I am proud of the fact that I was taught two South Indian languages and can converse pretty easily in both.

The story that has influenced my reading and writing the most is an ancient Indian epic that I love deeply and return to over and over again. I am not resentful of being different than the “typical” American. I have never been afraid or embarrassed to explain my heritage, or what certain parts of my culture mean. If there were times when I felt stifled by my “traditional” Indian parents, I am pretty sure I have not let that fester and grow and consume my identity as a person.

So, where are the books about girls like me? The ones who certainly don’t ignore the color of their skin, but who also appreciate and struggle with other aspects of their identity just as much? Who see that race is one part of who they are. An extremely important part, yes, but a part. I am more than the color of my skin, and the culture in which I was raised. I am a woman, of color, and a twenty-something American, and a teacher, a reader, a writer. I want to know if there are books about the Indian girls who understand that having a foot in two different worlds can, at any time, go from thrilling to awkward to painful, but for whom that dichotomy of being does not seem to be the only central question of their lives.

Category ID: 4284
Category ID: 867
To say that I am 1000% comfortable in my skin all day every day, that I never need nor want stories about Indian girls whose central need is about reveling in their culture or about fighting against it, would be a lie. Coming to terms with our heritage is a struggle, and it is an incredibly important one. We all go through it, and we all deal with it differently. So yes, I’m glad that there are books out there like A Whole Story of a Half Girl by Veera Hiranandhi, or  Neesha Meminger’s Shine, Coconut Moon. These books send strong messages about growing up different, and coming to understand who you are.

But I also need books about Indian girls who, I don’t know, are taken to an estate in the country and find a magical wardrobe that leads to a strange, snow-covered land. Or what about the Indian girls who went to ballet classes, fell in love, and dreamed of becoming professional ballerinas. Would their ethnicity and heritage be an intrinsic part of their character? Would it perhaps affect the events of the story, as well as their responses to events or decisions they make? Absolutely — as long as it is done right. Certainly, a person’s race should never be completely ignored in the telling of their story. But neither should their struggles be tied ONLY to their heritage. Just as we do in our lives as Indian Americans, a balance must be struck.

A children’s author recently said that “Representation matters because seeing yourself challenges and expands the narratives you believe are true for you.” I want to know that my heritage, and my ethnicity, are not the ONLY narratives about me worth exploring. I want to know that girls like me also struggle with other passions — with different jobs, with mental health issues, with insecurities about body type or sexual orientation — and so much more.