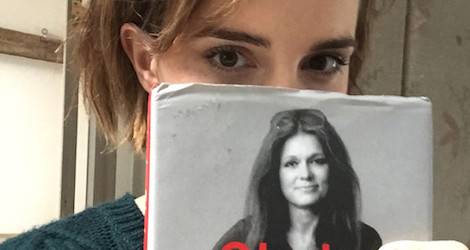 It’s been three months since Emma Watson launched a global feminist book club on Goodreads. When Watson announced she would be doing this as a part of her work with the UN, I speculated about what such a concept could do, and four months later, I don’t think the club is doing badly at all. The discussions have been lively and constant (sometimes very difficult to follow because of the sheer size of the group – almost 130,000 people from all over the world), the discourse around the books has been intersectional, and Watson has made some good book choices.

The books Watson has chosen have been surprisingly diverse so far. Unfortunately, as a feminist killjoy, I had expected Watson to focus on white feminist writers because of her first choice, My Life on the Road by Gloria Steinem. However, she has so far included two books by black women, which I appreciate hugely.

After Steinem’s memoir, Watson picked The Color Purple by Alice Walker. This is definitely one of my favorite books ever, but I didn’t expect it to be picked because I figured the club would focus on non-fiction books. I say this because I feel a lot of feminist work is done in the language of fiction, and it can often be ignored because it is fiction. I’m so glad Watson picked this book, it’s definitely the right path towards an inclusive and intersectional sisterhood. Understanding the different experiences of black women is essential.

The next book was All About Love: New Visions by bell hooks, which I haven’t read. I enjoy hooks’s body of work, though, and believe that she has a lot to teach us, especially on matters of love. I think the feminist movement does need a little bit more love and bell hooks is the teacher we have to learn from. Although, as a side note, a lot of members in the group noted that hooks is very intent on slut-shaming other women in the name of love.

After hooks, Watson picked a book she confessed she had already read and loved: Caitlin Moran’s How To Be a Woman. This is both a controversial pick and a fairly mundane one. Moran’s name is extremely linked to feminism, but her work has been criticised for being transphobic, whorephobic and unconcerned with women of color. No one is perfect, but I think Moran’s prominence as a white feminist attracts a lot of controversy, especially because she doesn’t really use her white privilege to uplift women of colour – and isn’t that one of the points of feminism? The good thing about Watson picking this book, however, is that many members were critical of the book, noting that the book is not inclusive enough. I think it’s completely valid to read a book to start a dialogue and discussions of where the author got it wrong (or right) are extremely important.

The next book, for the month of May, was The Argonauts by Maggie Nelson. I haven’t read this one just yet, but Goodreads tells me Nelson relates her personal experiences to feminist theory, which I am always here for.

The month of June will see members reading the graphic novel Persepolis by Marjane Satrapi, which I have just ordered because the premise sounds so exciting. Persepolis is an auto-biographical graphic novel that tells the story of Satrapi as a daughter of Marxists in Tehran during the Islamic Revolution. This sounds amazing, and I love that Watson is embracing a graphic novel. Of course, I know that graphic novels are literature but I don’t see it being treated as such very often, and introducing a graphic novel to a book club is in itself interesting to me.

Watson’s book club has somewhat lifted my feminist spirits. Even when reading problematic feminist authors, members have been faithful to intersectionality, which is more than I had ever expected. I look forward to Watson’s next picks; I hope it continues to feel like we are all learning together.