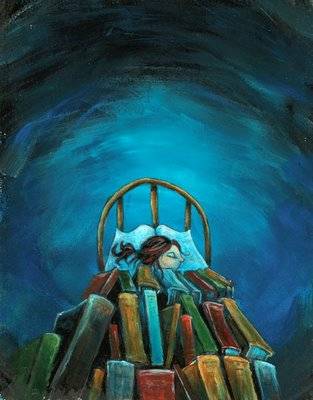 Attitudes toward dreams tend to fall pretty consistently into two camps: people who are fascinated by them and sometimes find some meaning in them, and people who are bored or even hostile toward hearing others talk about them.

I’m in the first camp. My dreams are always incredibly detailed and I usually remember them. I used to keep a dream journal. My therapist friends are especially interested in them, which, what does that say about me?

(If you’re in the second camp, my apologies, though I assume you probably didn’t click the post in the first place…)

Because I’m a promiscuous reader, I frequently dream about books and authors. Once, it was a quest to rescue an ancient, enchanted volume from a cabin in the middle of some creepy woods; I was repeatedly thwarted by an evil Zooey Deschanel. It was pretty awesome.

Then there was the time when I found myself in a Sarah Waters-esque gothic setting—spooking house, just waiting for my plot twist.

My favorite, though, was when I went to a Neil Gaiman book signing, only to learn he was retiring from writing to become a barber.

These are just a few obligatory shares since I wrote this post about my own dreams as an excuse to hear about yours. Share away in the safe space that is the comments.