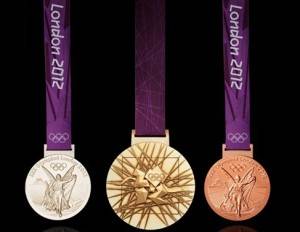 The games of the Thirtieth Olympiad finally, officially ended yesterday afternoon–or yesterday evening, as NBC wants you to believe. For one last time, the nations of the world came together to relish in the spirit of their shared humanity after two weeks of trying to show how much better they are in, say, handball, dressage, or competitive trampoline.

But if that’s not reason enough to care, I’ll try here to make the pageantry relevant to you literary types. After all, countries don’t merely produce sprinters, swimmers, skeet-shooters, and small female gymnasts of indeterminate age. As English-speakers and readers, we owe a debt of gratitude to other languages and their nations of origin for originating some of our favorite words.

I thought it only fair that some of these countries should take home a few medals not just for synchronized swimming or freestyle wrestling, but for their lasting linguistic contributions.

The role call of medals that follows is, of course, not an exhaustive list, because making one would be absolutely exhausting. It’s just me, here—it’s not like I have an entire Etymological Olympic Committee. So among the winners, you won’t see the host country (far too many English words originated in England) and ditto for the nation-state credited with originating the Olympics themselves—Greek word roots are about as common as Latin roots, or for that matter the derived Italian, French, Spanish, and other roots. And with English being a Germanic language, I guess German is out, too. But that still leaves plenty of pleasant surprises…

Category ID: 13193
Too obvious? Most of us know kangaroos live in Australia, but we are ignorant of the Aboriginal language(s) from which we get this fantastic word (and others).

SILVER: Boomerang
Yes, it means the same thing in Aboriginal Australian, but English-speakers have taken it to the next level (and back), applying it in all situations, and even as a verb.

BRONZE: Dingo
What do you know? It did take the baby!

GOLD: Robot
Derived from the Czech robota for “labor or drudgery,” or more specifically robotnik, or “slave,” coined by Karel Capek in his 1920 play, R.U.R.

SILVER: Dollar
That’s right, the almighty American dollar owes its existence, or at least its name, to the original Czech tolar, a 16th-century Bohemian coin.

BRONZE: Pistol
This small gun—the sound of which begins most track races—gets its name from the pist’ala, a 15th-century Hussite firearm. (This medal will likely be protested by representatives of other languages that can also claim some credit for the word’s origins.)

GOLD: Zombie
Not just a great word, but very in vogue right now. It may have derived from two West African languages—the Kikongo zumbi, meaning “fetish,” and the Kimbundu nzambi, meaning “god.” Originally the name of a snake god, it came to mean “reanimated corpse” in African, and later Creole, forms of voodoo.

SILVER: Jumbo
P.T. Barnum often gets credit for introducing this word, along with his elephant “Jumbo” in 1882. But the name is likely from a slang term in use then meaning “clumsy, unwieldy fellow,” which itself is possibly from a word for “elephant” in a West African language.

BRONZE: Banana
DISQUALIFIED. As it turns out, banana derives from an African word, though it’s likely from Wolof, spoken in Senegal, The Gambia, and Mauritania, not the Congo.

GOLD: Algebra
This perhaps obvious entry gets the gold not just for the word itself, originating from the Arabic al-jabr, for “completing or restoring broken parts,” but for the concept itself, which has made a dramatic impact on the lives of 10th graders around the world.

SILVER: Zenith
From samt al-rā’s, which literally means “top of the path,” first appearing in texts of astronomy in medieval Islam. Made the move to Latin in the 12th Century, and reached the zenith of recognition in the 20th Century as the name brand of an American electronics company.

BRONZE: Alcohol
This one wins for irony. The word dates back to al-kuhul, “a fine metallic powder used to darken the eyelids.” In English, it would evolve from the meaning of “powdered cosmetic” to “the spirit of anything,” including liquids—i.e., booze. Booze—alcohol—is forbidden in Islam, the state religion of Saudi Arabia and other Arabic-speaking nations.

GOLD: Commando
This lovely word that has been lionized in at least a dozen video games, the classic Schwarzenegger film, and the phrase “going commando” began in Afrikaans as “kommando,” which originally referred to a mounted infantry unit raised specifically to retrieve stolen livestock.

SILVER: Aardvark
It shouldn’t be surprising that the odd double-A construction came from Afrikaans.

BRONZE: Trek
Just sounds like “track” with a South African accent, doesn’t it?

GOLD: Bandana
It’s not a stretch to think of Indian scarfs, but a bandana has a distinctly American cowboy/rap-star feel to it. Oh well, the word comes from the Hindi bandhna, literally “to tie a scarf around the head.”

SILVER: Bungalow
Most recognizable as a type of American country house or trendy night club, the original bangla literally, and logically, means “in the Bengal style.”

BRONZE: Khaki
Originally from the Hindi and Urdu word for “color of dust,” khaki is known in English primarily as the color of casual pants.

GOLD: Caviar
What? It’s not French? Well, it is, but it derives from the Persian khaviyar, meaning “egg bearer.” And for making fish eggs sound classy, it wins top prize.

SILVER: Balcony
Wins for its straightforward construction: balakhana combines bala, “above,” with khana, “house or upperhouse.”

BRONZE: Bronze
How do you say “no brainer” in Persian? It’s only what might be called one etymological theory, but “bronze” may like come from birinj, meaning “copper.”

GOLD: Chutzpah
There were many candidates for the top prize, but this one—which probably got to English via Yiddish from the original Hebrew, chootz-PAH—gets the gold for transcending definition in any other language. Most English sources will try something like “supreme self-confidence,” but the real meaning can only be unlocked with examples—for instance, the case of the man who, after being convicted of murdering both his parents, begs for mercy from the judge on account of the fact that he is an orphan. That’s chutzpah.

SILVER: Behemoth
From the Hebrew b’hemot, the plural form of “beast.”

BRONZE: Sapphire
Wins a mention for the fact that while the word’s origin get traced back to Latin and Greek, it goes further to the Hebrew, sappir, “precious stone.”

GOLD: Gong
Yep, a gong is a “gong.” And it’s worth noting that without the popularity of The Gong Show in the 1970s, who can say if Star Search and/or American Idol would have ever been created.

BRONZE: Compound
While a “compound”—as in “an enclosed group of buildings”—is the kind of thing you’d expect to find in Cape Cod or Southern California, the word possibly traces back to kampung, or “village.”

GOLD: Vodka
Another obvious one, but credit must be paid!

SILVER: Gulag
Also obvious, but did you know it derives from a Russian acronym for Glavnoye Upravleniye Ispravitelno-trudovykh Lagerey i kolonii, “The Chief Administration of Corrective Labor Camps and Colonies.” You can see why they went with the acronym.

BRONZE: Intelligentsia
And…you’re probably not surprised by this one, either—but it earns kudos for the way its meaning has expanded to include just about any intellectual elite or secret group in any society.

GOLD: Succotash
Great word, from the Narragansett msickquatash, meaning “boiled corn.” Of course, it later took on a whole new meaning for children everywhere, thanks to Sylvester the Cat.

SILVER: Hominy
Derives from uskatahomen in the Virginian Algonquin. Gets the silver ‘cause I think the word “hominy” is funny.

BRONZE: Moose
The originial Eastern Abenaki word is mos. Not sure how it got the “oo.”But I think moose(s) are funny.

*As these words are derived from languages spoken by native peoples who may also be counted among the First Nations north of the border, Canada might get some credit here, too. But… USA! USA! USA!