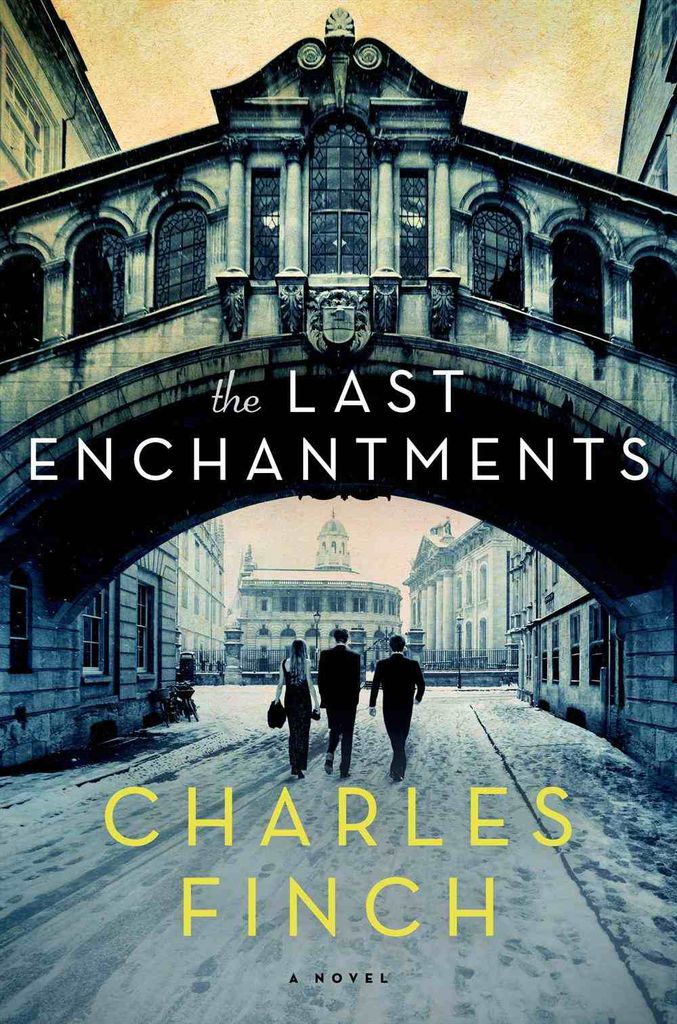 This giveaway is sponsored by The Last Enchantments by Charles Finch.

After graduating from Yale, William Baker, scion of an old line patrician family, goes to work in presidential politics.  But when the campaign into which he’s poured his heart ends in disappointment, he decides to leave New York behind, along with the devoted, ambitious, and well-connected woman he’s been in love with for the last four years.

Will expects nothing more than a year off before resuming the comfortable life he’s always known, but he’s soon caught up in a whirlwind of unexpected friendships and romantic entanglements that threaten his safe plans. As he explores the heady social world of Oxford,  he becomes fast friends with Tom, his snobbish but affable flat mate;  Anil, an Indian economist with a deep love for gangster rap; Anneliese, a German historian obsessed with photography; and Timmo, whose chief ambition is to become a reality television star. What he’s least prepared for is Sophie, a witty, beautiful and enigmatic woman who makes him question everything he knows about himself.

If the unending flow of news stories about Millennials is any indication, coming of age in the 21st century brings experiences, challenges, and relationship possibilities unlike those young people have encountered ever before. For this giveaway, we asked you to tell us about your favorite books about coming-of-age and falling in love in the 21st century. Your top three picks are:

The Fault in Our Stars  by John Green

Eleanor and Park  by Rainbow Rowell

The Perks of Being a Wallflower by Stephen Chbosky

These titles may not come as huge surprise, but the rest of the list is a real mix. Not every book you mentioned was actually about the 21st Century, but all were written within the last 14 years, so they definitely have a 21st century perspective on falling in love, and I’d say that counts. There are YA favorites alongside literary fiction bestsellers. But they are all about figuring out who you are and falling in love.  Take a look at the titles tickled your fancy:

An Abundance of Katherines and Looking for Alaska by John Green

My Most Excellent Year by Steve Kluger

Just Listen and This Lullaby by Sarah Dessen

My Struggle (Books 1 and 2) by Karl Ove Knausgaard

The Circle by Sara B. Elfgren and Mats Strandberg

That Time I Joined The Circus by J.J. Howard

Me Before You by Jojo Moyes

The Lover’s Dictionary by David Levithan

A Visit from the Goon Squad by Jennifer Egan

A Walk to Remember and The Notebook by Nicholas Sparks

The Interestings by Meg Wolitzer

The Monsters of Templeton by Lauren Groff

To Be Sung Underwater by Tom McNeal

The Spectacular Now by Tom Tharp

The Twilight Saga by Stephenie Meyer

City of Thieves by David Benioff

Rules of Civility by Amor Towles

The Savage Detectives by Robert Bolano

The Love Affairs of Nathaniel P. by Adelle Waldman

The Statistical Probability of Love at First Sight by Jennifer E. Smith

The Rosie Project by Graeme Simsion

Water for Elephants by Sara Gruen

Anthropology of an American Girl by Thayer Hamann

A Map of Tulsa by Benjamin Lytal

All the Sad Young Literary Men by Keith Gessen

The Impossible Knife of Memory by Laurie Halse Anderson