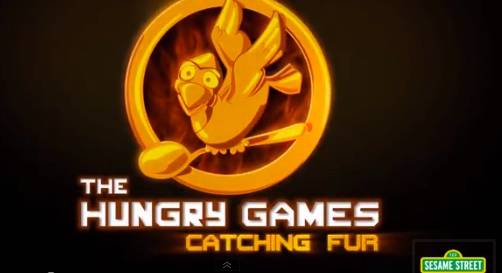 Itching for Catching Fire to just be in theaters already? How about some parody videos of Suzanne Collins’s Hunger Games and Catching Fire to ward off the anticipation just a bit longer? Here’s a glimpse at five of my favorites.

Let’s start with something simple and straightforward: The Hunger Games as reenacted by cats and cardboard.

May the Odds Be Ever in Your Favor in this parody of The Hunger Games as played out by Beanie Babies.

Category ID: 1091
Category ID: 468
What’s Up in YA? Newsletter
Sign up for What's Up In YA? to receive all things young adult literature.
Thank you for signing up! Keep an eye on your inbox.
By signing up you agree to our terms of use
[youtube]http://youtu.be/N2lRxqWbTec[/youtube]

Ah, Sesame Street. Thanks for bringing us The Hungry Games: Catching Fur. “Why you so finicky, Finnicky?”

Do you know the “Bad Lip Reading” series? If not, get acquainted with their bad reading of The Hunger Games. This one is a little crude but then again, the source material is too.

This one gets me every single time: it’s a parody of Lana Del Rey’s song and video “Video Games” but it’s about The Hunger Games. “I don’t want Peeta to be dead / A pita is a pouch of bread / but that’s his name.”

If you know of other great parody or humorous takes on either The Hunger Games or Catching Fire, feel free to leave a link in the comments.