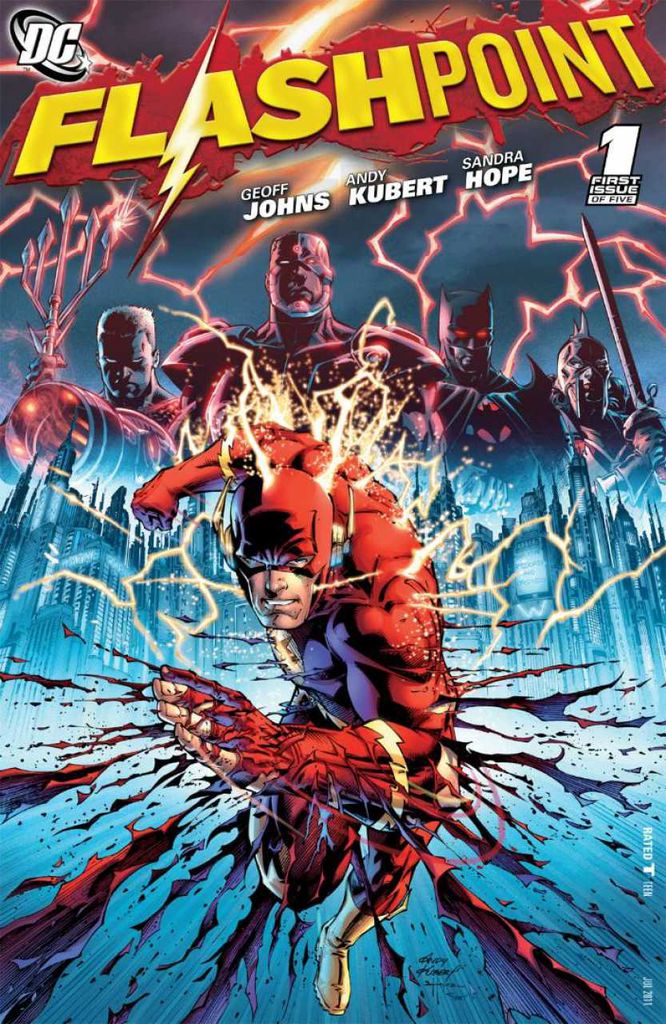 I usually make sure to read the source material before watching adaptations. But I had never been into reading the Flash…until I got hooked on his television show. Have you been following The Flash on the CW? If not, you can fix that right now by heading on over to Netflix and binging seasons one and two. I’ll wait. (Seriously, it’s worth your while, and spoilers follow!)

So now, the jewel-like perfection of the first season has convinced you to forget season two’s missteps, and you’re excited for season three to start airing on October 3. And I’m excited to tell you that the storyline kicking off the new season presents a great opportunity to learn more about the Flash in print.

When last we saw our hero (this is your final chance to get caught up or click out!), Barry Allen, restless even in victory, did something he knew he shouldn’t: he used his super speed to travel back in time to the night his mother Nora was murdered…and he saved her. DC’s interpretation of why that was a Bad Idea? The 2011 event we call Flashpoint.

If you want to learn more about comic book events, we’ve got a primer that will tell you all about them. No, they’re not the easiest or most economical story arcs to follow in real time (I’m currently regretting my investment in Marvel’s Civil War II), but the essential Flashpoint material has been collected in a trade paperback. If you dive right in without any prior knowledge of the DC universe, you might get that overwhelming I’m-reading-a-Russian-novel-and-everyone-has-six-names feeling thanks to the number of characters and alter egos you’re introduced to. Don’t even try to keep track. The main takeaway from these cameos is that you don’t mess with history because Butterfly Effect. Nora Allen got to raise her son…but Wonder Woman and Aquaman have raised armies (navies?) that are tearing Europe apart. Barry is a hero at heart, so you know he’s going to decide that he doesn’t want his mother alive at the cost of millions of innocent people. There’s no dramatic tension there.

Rather, the most interesting aspect of Flashpoint is how Barry labors under the misapprehension that his nemesis the Reverse Flash is responsible for the changed timeline. Barry recognizes the wrongness of the world he wakes up in, and reasonably assumes that the trouble originated with a time-traveling villain. Little does he know that he is that villain.

We’ve always had tortured anti-heroes. But what I appreciate about Flashpoint is how it shows us that even a generally cheerful super fellow can experience such deep discontent—such visceral emptiness—that he winds up acting selfishly, to the tune of utter ruin. Because there are a limited number of DC characters that are acknowledged on the small screen, The Flash probably can’t spend too much time on the global destruction wrought by the preservation of Nora’s life (I don’t anticipate a backdoor pilot for a Wonder Woman or Aquaman series, although yes, please make those). Instead, I hope they focus on the best of Flashpoint, which, counterintuitively, is the worst of Barry.