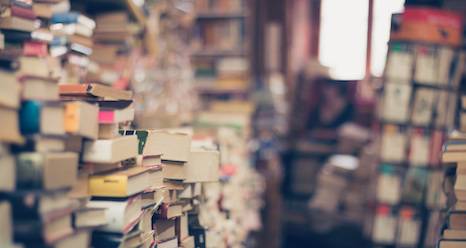 In my day, we didn’t blog about books that weren’t released yet! Okay, okay, I realize I’m being crotchety. But it’s true! Many years ago, when I first started reading book blogs and was only beginning to dream of starting my own, there wasn’t a lot being written about unreleased books. New releases, yes. New releases have always been at the forefront of the bookish internet. And those are exciting! Reading about brand new books, fresh off the press, is fun. You can feel like you’re one of the first people to dive into that story, and hopefully it will take off and you can discuss it with your friends! I’ve always wished that backlist books got a little more attention online, but I’m accustomed to that. Where I draw the line, though, is reading constantly about books that are so new they don’t even exist yet.

It was subtle, at first: I started to notice more unreleased books being mentioned in monthly wrap-ups. That makes sense. Reviewers get advance reader copies and want to read them before the release date so the review can go up on time. (That’s how we used to it, in my day! grumble grumble.) Then I started noticing recommendations that included unreleased books. “That’s odd,” I thought. “Why would you recommend someone a book they couldn’t read yet?” And then came the lists of unreleased books. The first time was exciting! 60 books to look forward to in 2017! LGBTQ books coming out this year! Diverse books to watch for! But then they kept multiplying…

Now, I feel like I’m reading more about books that haven’t been released yet than books that exist. And worse, there’s now the pressure to preorder these books. Preorder a book from an author I’ve never read! Preorder a book I only know the blurb of! The nerve! I understand preordering books that are hotly anticipated, like later books in a series that I love. I can also see preordering books from an author that I am devoted to. But a debut?

Honestly, encouraging people to preorder a book just because it sounds interesting feels dangerous to me. Personally, before I buy a book, I usually check out reviews from people whose opinions I trust. I research the book and make sure the subject matter and style will appeal to me.

I can’t help but think about a book that I saw recommended and added to a lot of diverse book lists before its release, and then later saw a twitter thread from a sensitivity reader who found it offensive and insulting. It had been touted for being diverse, but because it hadn’t yet been released, no one had really been verifying whether it was good representation before they encouraged preordering it.

I also think that this focus on unreleased book isn’t good for sales. It used to be that most bloggers I knew would get ARCs, read them beforehand–sometimes many months beforehand–so that they could schedule the review for the release date. That way, on the book birthday and shortly afterwards, it saw a lot of attention. Seeing the same book mentioned several times on different blogs can make people feel like there must be something to it, so they look into seeing if it’s something they want to buy (or borrow from the library).

Now, often the time that I hear the most about a title is months before it’s released (when the ARCs have gone out). I’m lucky enough as a reviewer that I can sometimes then request those ARCs, but that’s not how I prefer to read. Usually I think, “I’ll wait until it comes out and then I’ll buy it or borrow it.” But by the time it’s actually released, everyone’s stopped talking about it and I’ve forgotten it.

There seems to be a bookish internet bubble, where the people on the inside (mostly book bloggers) are focused on unreleased books, whereas the 99% of book lovers outside of that bubble are interested in books they can actually get their hands on. Hearing about a book you’re interested in and then finding out you have to wait 4 months for it kind of kills the excitement.

I get it. I joke about “back in my day,” but really, those were the days where bloggers were a lot more concerned about behaving exactly the way publishers would like. Now, there’s more recognition that book bloggers are doing advertising for publishers, and shouldn’t feel like they owe them anything (since it’s free labor). Of course you should be able to talk about the books you just read in a wrap-up, even if they aren’t widely available yet. But I do think we need to find a balance.

I think that those of us within the book bubble need to take a peek outside of it. Maybe reschedule our gushing enthusiasm for a certain title until the people reading our reviews can go get their hands on it, too. We might want to take a moment to revisit books read and loved months ago, some that have just been released and need a little boost to get the spotlight.

Let me know what you think! Is this just a crotchety pet peeve of mine, or do you also get frustrated about reading about so many unreleased books? I’d love to hear your thoughts!