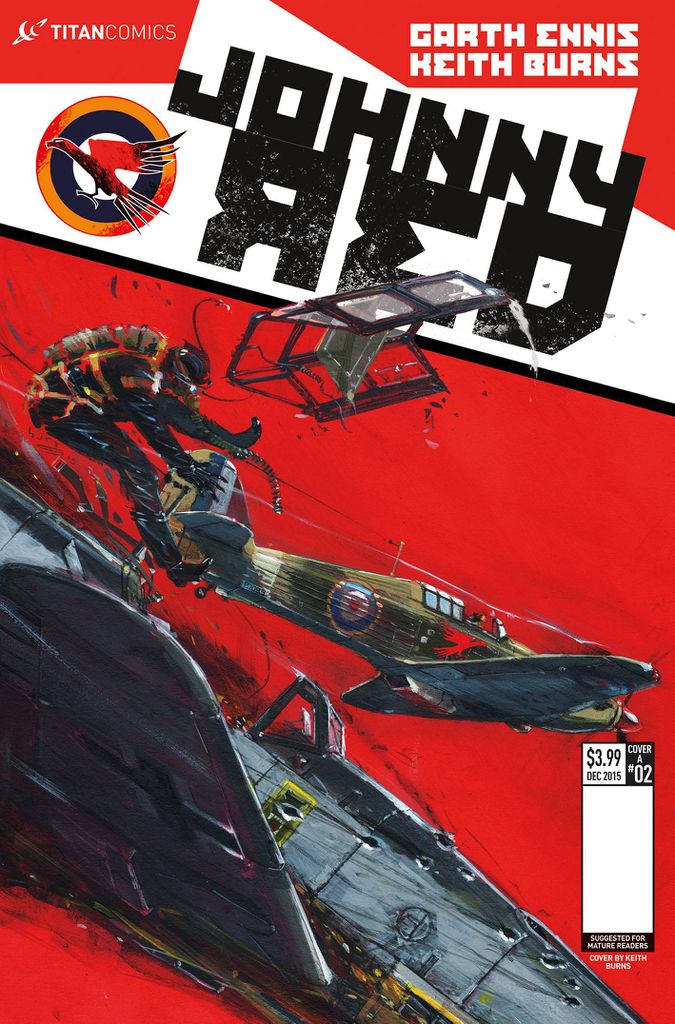 War stories have an illustrious tradition in comics, from escapist adventure to propaganda tool to an outlet for veterans in the wake of the 20th century’s every military conflict. The pinnacle of their popularity might’ve been in the 40s and 50s, but they’ve known a modern steward in writer Garth Ennis. He and artist Keith Burns turn their attention to the iconic Johnny Red, serial star of gritty British magazines like Battle and Eagle. Tom Tully, Joe Colquhoun, and John Cooper told tales of a disgraced RAF pilot, John Redburn, flying with the Russian Falcons in hundreds of installments during the 70s and 80s. Now the Falcons fly with the famed “Night Witches” regiment of female aviators Ennis previously chronicled in his Battlefields series.

I spoke to Ennis and Burns about the continuing legend of Johnny Red.

Paul Montgomery: In previous adventures, Johnny’s flown for both the RAF and the Russians. What’s his current affiliation for this outing? What’s his motivation for continually heading into the clouds, regardless of the banner?

Garth Ennis: He’s on the Russian Front where he belongs, leading Falcon Squadron- he’s devoted to them and they’re devoted to him, a bond formed in one dreadful battle after another. The RAF stories were from later in the original Johnny Red run, around 1983-4, and didn’t really work- they were part of the strip’s long, slow decline.

PM: What are your respective histories with Johnny Redburn and the rest of the Battle roster? How did those WWII stories, and those like them, color your own view of war and how it’s been portrayed in comics? Is this an homage to that era, or an update?

GE: I began reading Battle in the summer of 1978, and was instantly attracted to Johnny Red by Joe Colquhoun’s brilliant artwork and Tom Tully’s gritty, action-packed story and spot-on characterisation. Other favourites included Darkie’s Mob, HMS NIghtshade and- of course- Charley’s War. The stories led me to an interest in military history that survives to this day, and taught me the value of research when the time came for me to write my own war comics. Seeing how writers like Tom Tully, Pat Mills and John Wagner blended fact with fiction taught me a lot about creating a compelling narrative. Ultimately, what we’re talking about here are stories based on actual events- allowing for the hyperbole common to boys’ adventure comics of the ’70s, we’re seeing things that people did in real life. I find that more compelling and more fascinating than any fantasy story.

Keith Burns: I came to Johnny Red late through the reprints and the Falcon Squadron website, being too interested in drawing and playing Star Wars when it first came out.  I remember discovering later on that X-wing and Tie-fighter battle where based on WW2 dogfights which peaked my interest.   I was already a fervent fan of that period of British war comic publishing so when the reprints came out I devoured them.  The war comics of the time where full of the drama and waste of humanity, just like the factual historical books I read on the same subject.

PM: Garth, you’ve been a real steward for war stories as a genre in this medium. What is the attraction for you?

GE: Partly it’s an interest in military history, as mentioned, with the grand strategy of the Second World War- the pivotal moment in modern human history- forming the backdrop for the stories. Partly it’s an appreciation for the hardware- aircraft, tanks and so on. But mostly it would be the incredible stories and first-hand accounts I’ve run across in my research, reading about the experiences of people out on what I’ve often called the knife-edge of human existence. There’s a kind of desperate, awe-inspiring truth to these that utterly eclipses any invented narrative.

PM: Keith, there’s a great tradition for high-flying action in comics art, and a number of the medium’s best cut their teeth on war comics. What inspiration do you look to when choreographing a dogfight? Is it comics? Film? How do you grapple with composing something so technical, but also far from an everyday experience for most people?

Keith Burns: I’m a full member of the Guild of Aviation Artists and therefore have a deep interest in the hardware and historical side of things.  For the dogfights I look for inspiration at anything I can get my hands on – movies, comics, books, computer games, photographs – I visit museums and air shows a lot.  It still amazes me that I can go along to an airshow and watch a Hurricane and Bf-109 have a mock dogfight – that is bingo.Having access to something like that helps with more than the accuracy, it helps me to try and capture the movement of flight and the kinetic energy of a dog fight with heavy aircraft tearing through the sky like projectiles trying to knock each other out of the sky using tiny projectiles.  I love the idea of piston driven engines exploding internally and dragging the aircraft through the sky using lethal propellers… jets don’t hold the same appeal.  Scale models help a lot with replicating the action and movement – posing them in positions that capture the most intent and energy depending on the scene.  Models are so technically good these days and can be made with the full internals and so are a referencer’s dream.  Building a model gives you a better understanding of the how the aircraft is constructed which helps understanding how to draw it.  I believe you have to be deeply interested in the subject matter when it comes to drawing WW2 aviation or any reference heavy work as it is very labour intensive, I couldn’t put the extra work in if I didn’t really love it.  No, I have yet to be caught jumping around the room shouting ‘die englander’…note the word ‘caught.’

PM: Though the Nazis pose an immediate threat to Red and his squadron, it sounds like the deeper concern is Russia’s own NKVD. That composed a lot of different elements, from local police and fire to the kind of nefarious secret policing, abductions, and mass executions more popularly associated with the KGB. How does this stuff figure into the story?

GE: The NKVD were a constant thorn in Johnny Redburn’s side in the old JR strip, with his combat successes as leader of Falcon Squadron more or less protecting him from their ire- it’s probably the least realistic aspect of Johnny Red, although the performance he wrung out of that Hurricane would be a close second. I’ve essentially followed the lead of the original story, with the secret police taking an interest in our hero but ultimately having bigger fish of their own to fry. These are desperate times for Mother Russia, and grand schemes are in the offing that utterly dwarf anyone’s concerns about a somewhat incongruous British fighter pilot.

The first issue in this new series from Titan is available now and the second releases today.