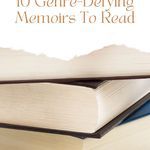 Recently, I heard someone on a podcast declare that there isn’t much more to say about memoir as a genre than has already been said. I beg to differ! My first thought was that Carmen Maria Machado would like a word. And then I came up with this list of books that invite all kinds of new ideas about what memoir as a genre can do.

Machado’s book In the Dream House is my starting point, but all the books on this list take the genre in some new direction. Sometimes writers do something unusual on the page such as incorporating images, charts, translations, or footnotes. Sometimes writers combine genres, mixing memoir with poetry, essay, diary, folklore, philosophy, or nature writing. Sometimes they do playful things with time and reject traditional chronology. Each book on this list has elements that are recognizably memoir, and each one also breaks down the genre in some way. They both inhabit and defy the form.

To me, these books are some of the most exciting writing happening today. Memoir is flourishing! If you haven’t read In the Dream House, I would start there. If you have, take a look at the rest of the list and find more books that will broaden your understanding of what a memoir can do.

In the Dream House by Carmen Maria Machado

While in her MFA, Machado met and fell in love with a charismatic woman who later turned out to be full of rage. In the Dream House is a groundbreaking book, in part because of its portrayal of abuse in a queer relationship, a subject too often ignored. It’s also formally inventive. Machado has divided her memoir into short chapters, each inspired by a narrative trope, many of which come from fairytales and fables. This structure gives the emotionally wrenching story both literary depth and tonal variety.

First published in 1976, The Woman Warrior is an account of Kingston’s experiences growing up a Chinese American in California. She mixes her own first generation immigrant story with her mother’s stories of China, as well as with tales from Chinese folklore and history. The result is an imaginative, poetic, genre-bending picture of one woman’s attempts to grapple with her history, as well as with racism, misogyny, and trauma.

The Natural Mother of the Child by Krys Malcolm Belc

Krys Malcolm Belc is a transmasculine, nonbinary parent, and this memoir explores his gender identity and his experiences with pregnancy, childbirth, and breastfeeding. The memoir offers a new and necessary perspective on gender and parenting. It also includes many images that document Belc’s life — photos, legal documents — adding depth and complexity to a tale of one person grappling with his understanding of himself and his place in society.

Encyclopedia of an Ordinary Life by Amy Krouse Rosenthal

Amy Krouse Rosenthal tells her story in encyclopedia entries. With whimsical titles that are organized alphabetically, Rosenthal writes short pieces that describe her life and observations on the world. She is endearing and funny, and she makes writing look easy. Together, the vignettes, stories, charts, maps, lists, and more add up to a full picture of an ordinary person. This is a book to gobble up.

The Folded Clock: A Diary by Heidi Julavits

Subtitled a diary, this book reads like a series of short personal essays that together make up what we might call a memoir. The diary entries begin with the author’s daily life and move into examinations of time, youth, memory, parenting, friendship, marriage, and so much more. The entries are not in chronological order, which leads to fascinating juxtapositions and highlights moods and ideas rather than events leading from one into another. It’s a gorgeous book, in the writing and as an object.

H is for Hawk by Helen Macdonald

Who would have expected a book about falconry to become a bestseller? Reeling from the loss of her father, Macdonald adopts the goshawk Mabel and begins to train her. As she describes her adventures in falconry, she explores her grief at her father’s death and tells the story of T.H. White and his book The Goshawk. Macdonald takes these many threads, including nature writing, memoir, biography, and history, and brings them together beautifully in this unclassifiable book.

To call this book a memoir, even a genre-defying one, is a bit of a stretch, but it does have memoir elements as well as essay, image, and poetry, so I’m counting it. This is a book about race in America and the many microaggressions people of color, particularly Black people, are subject to. Ranging from Serena Williams to everyday encounters at the supermarket, Rankine analyzes the effects, big and small, of racism on American citizens. It’s a powerful, ground-breaking, innovative, necessary work.

The Argonauts by Maggie Nelson

The Argnonauts is a memoir focused on love, sex, pregnancy, and parenthood. Using philosophy and theory to guide her thinking, Nelson contemplates her experiences of falling in love with the genderfluid artist Harry Dodge, getting married, giving birth, and living through the early days of motherhood. Nelson’s deep engagement with ideas to understand her experience of the world makes this heady, ground-breaking memoir unforgettable.

The Magical Language of Others by E.J. Koh

This book is beautiful as an object as well as a piece of writing. It tells the story of Koh’s parents’ decision to return to South Korea for work, leaving her as a 15-year-old in the care of her older brother. During their separation, Koh’s mother wrote her letters in Korean, images of which are scattered throughout the book, along with Koh’s own translations. Koh’s success as a poet shines through in the beauty and delicacy of her prose. This book explores writing and translation as well as telling a coming-of-age story. It’s a powerful look at family, culture, language, and selfhood.

The Undying by Anne Boyer

The Undying is a book about being ill in the contemporary U.S. Anne Boyer tells the story of being diagnosed with an aggressive form of breast cancer and what it took for her to cope. She also looks closely at the economics of illness. She examines the culture around breast cancer and considers other women writers who have battled disease. Her subtitle shows the book’s range: “Pain, Vulnerability, Mortality, Medicine, Art, Time, Dreams, Data, Exhaustion, Cancer, and Care.” It’s a varied, genre-bending take on life and death.