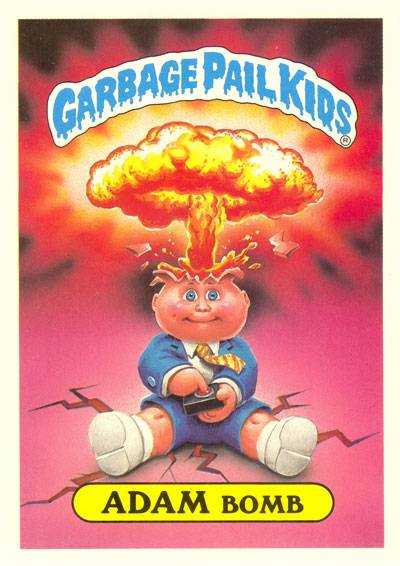 My earliest memory of accumulating enough capital to be able to go buy something on my own ended with a large pile of unchewable, dry, and shattered sticks of gum. After months of lawn mowing and some other weird chore than can only be described as ‘rooting around the yard to confirm signs of vermin infestation,’ I had saved up enough money to buy something I badly desired: Garbage Pail Kids cards. Not just a pack, either, but an entire box. I don’t remember how much it cost me, but I remember the feeling of leaving the comic shop with it. I cradled it in my arms, cooed to it, and would have wrapped it in a blanket if my mom had let me.

If I had been smart or dumb enough to put financial speculation before my kidhood emotions, I would have left the box unopened and sealed in its cheap plastic skin. The wrapper cost mere cents to make, of course, but its integrity was responsible for wild fluctuations in the future value of the object as a commodity. If it had stayed sealed and in my possession, I would have been able to make a pretty penny off of it today. But, with all the 9-year-old’s disdain for the myth of the rational agent in economics, I ripped open the box. And then I ripped open each pack, pack by pack. 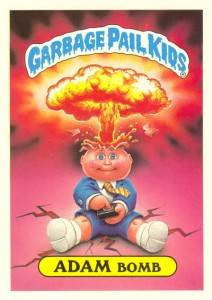 For the uninitiated, let me give a brief explanation of exactly what were talking about here. The Garbage Pail Kids were a series of sticker/trading cards put out by the card company Topps. They first came out in 1985, during the height of the Cabbage Patch Kid craze, and were meant as a very obvious satire on the so-cute-it-almost-hurts baby dolls. But the Garbage Pail Kids didn’t need to stay harnessed to their Cabbage cousins for the joke to resonate. They were funny in their own right, depicting morbidly grotesque baby characters, each with a surreal ailment or condition to go along with their pun-names. You see ‘Adam-Bomb” pressing a red button, his head exploding into a mushroom cloud. There’s “Handy Randy,” who sticks his hands in his head, one in his scalp, the other from below his jaw. His fingers form teeth and it looks like he’s smiling. He has no actual teeth, and the holes in his head aren’t normally occurring anatomical formations. One of my favorites is “Bony Tony,” who unzips his face to reveal a cracked skull. The cards also came with sticks of horrible gum.

These images are meant for children, of course, but they’re also super disturbing. And they’re supposed to be. The Garbage Pail Kids were important to me, and I think to a lot of other people as well, because for the first time I was able to rebel. Against whom? Well, everyone who thought I was still a little kid, for one. Cabbage Patch Kids were for babies. But I’m a big kid, see? I liked disgusting things and weird things. I liked jokes and puns that upset parents and made girls squeal. I was finally able, through the Garbage Pail Kids, to understand what it means to be subversive. And like every form of American Rebellion, it was bought. And for cheap.

The puns were all part of it, of course, the zany names to go along with the images. But the images were what made it. The cards just wouldn’t have been as powerful had the drawings been more boring or less creative. Its a rare talent that can balance subversiveness with entertainment, diluting any heavy-handedness that might go along with the visual rhetoric of rebellion. So I wasn’t surprised when I learned that Art Spiegelman, of Maus fame, was the brainchild of The Garbage Pail Kids. He is by far the most famous living graphic novelist, and his reputation has been well earned. A fantastic artist, he’s not a bad writer either, as you can check out in the introduction he penned for the brand new book put out by Topps called, um, Garbage Pail Kids. Between its covers are all 206 images the little monstrosities in all their glossy glory. There are also four previously unreleased bonus stickers to look forward to.

You don’t have to be all nostalgic about them like I am to appreciate them, though. Anyone who likes absurdist stuff, illustrations, fart jokes, exploding heads, snot, puns, stickers, and cartoons will love this series. They’d even make a perfect gift for any 7-13-year-olds you might know who are looking to shed the sappy baby persona and slap a sticker of a finger-toothed baby monster on their bike. More power to them.