This list of Hamlet retellings is sponsored by Wednesday Books. 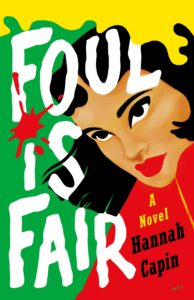 Jade, Jenny, Mads, and Summer rule their glittering LA circle. Untouchable, they have the kind of power other girls only dream of—until the night of Jade’s sweet sixteen, when they crash a St. Andrew’s Prep party. The night the golden boys choose Jade as their next target. They picked the wrong girl. Sworn to vengeance, Jade transfers to St. Andrew’s Prep. She plots to destroy each boy, one by one. And she and her coven have the perfect way in: a boy named Mack, whose ambition could turn deadly. Golden boys beware: something wicked this way comes.

William Shakespeare wrote many plays, but few are as popular or have been adapted as frequently as Hamlet. Shakespeare’s famous tragedy about the doomed Danish prince brought the world many memorable lines of dialogue, such as “To be or not to be? That is the question.” The story and its characters have been the inspiration for many works of art. And the play has even been translated into Klingon. 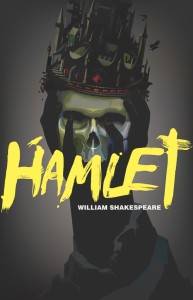 So with all the many versions and retellings of Shakespeare’s Hamlet out there, which ones are worth checking out? Here is a list of the ten best Hamlet retellings, across genre.

So it’s probably unfair to start this list with a book that hasn’t been released yet and is not set to release until 2021. I haven’t read it yet. No one has. And yet anticipation for this one is high. This book will be the last in Hogarth’s Shakespeare retelling series. Previous contributors to this series include Jo Nesbø who retold Macbeth, Margaret Atwood who wrote Hag-Seed, a retelling of The Tempest, and Anne Tyler who retold The Taming of the Shrew in her novel Vinegar Girl. Just to name a few.

Of the project, Flynn has said: “Hamlet has long been a fascination of mine: murder, betrayal, revenge, deceit, madness ‒ all my favorite things… Add to that some of Shakespeare’s most intriguing, curious characters ‒ from the titular brooding prince to rueful Ophelia ‒ and what (slightly cheeky) writer wouldn’t be tempted to reimagine it?” 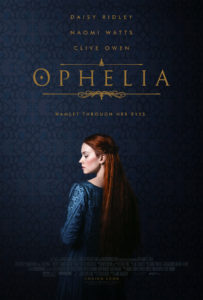 The 2018 film Ophelia (directed by Claire McCarthy) is based on the Lisa Klein novel of the same name. And of course, the Lisa Klein novel is based on the Hamlet character Ophelia. This film adaptation is much more compelling than the novel it is based on, however. This is probably due in part to the excellent casting. Daisy Ridley is excellent as the title character Ophelia. You also get Naomi Watts as Gertrude and Clive Owen as Claudius.

While this film is by no means perfect, this version of the story offers Ophelia some well-deserved agency. The film also gives Gertrude her moments to shine as well. A feminist reimagining of Hamlet? Yes please.

Reviews of the 2000 contemporary retelling of Shakespeare’s Hamlet, directed by Michael Almereyda, are mixed. But I maintain that this movie is worth a watch. Again, the cast here is excellent. You’ve got Ethan Hawke as Hamlet, Julia Stiles as Ophelia, and (my personal favorite) Bill Murray as Polonius. In this retelling, Hamlet’s father runs the Denmark Corporation, which is taken over by Claudius after Hamlet’s father’s untimely death.

Yes, there are some cringey moments in this adaptation that already haven’t aged well. For instance, rather than staging a play for his uncle, Hamlet directs a misguided video art montage. Yikes. Overall, however, this is an entertaining reimagining of the Hamlet story for the Y2K kids. 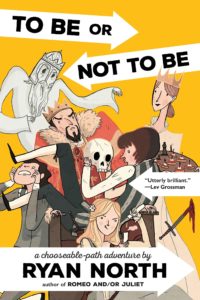 This one is pretty straightforward and a whole lot of fun. Love a good “choosable-path adventure”? Me too. Love Hamlet? Yep, that’s why you’re here. So you might just also love this interactive version of Hamlet where you get to decide the fate of the characters yourself. Pretty much everyone who has ever read or seen Hamlet thinks the title character is an idiot who made a lot of dumb (and ultimately tragic) decisions. Think you could do better? Make your own decisions for the story then. See what happens. Then try again. And if you enjoy this one, Ryan North also wrote one for Romeo and Juliet called Romeo and/or Juliet.

This is a film noir retelling of Hamlet from acclaimed Japanese director Akira Kurosawa. Illegitimate son Kôichi Nishi reaches a high position in a Japanese corporation and marries the daughter of the company’s vice president Iwabuchi. At wedding the reception, however, Nishi reveals his secret plan to avenge the death of his father. 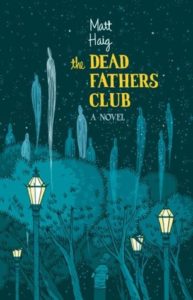 Here’s a unique and interesting contemporary take on the Hamlet story. In this 2006 novel, the character of Hamlet is reimagined as Phillip, a young 11-year-old boy who is visited by the ghost of his dead father. Phillip’s father says that he was murdered by his brother Alan. Now Phillip must avenge his father’s murder and prevent Alan from taking over the family pub. If Phillip is unable to avenge his father’s death by murdering Alan within the next three months, Phillip’s father will fall prey to the Terrors.

In an NPR review of the novel, Veronique de Turenne writes, “The Dead Father’s Club” is a lovely and unsettling book. Read it at your peril. Like Hamlet’s ghost, it refuses to fade away.” Can a book be fun and disturbing at the same time? I think this book is.

In this 2014 Indian crime drama film directed by Vishal Bhardwaj, Haider is a young student and a poet who returns to Kashmir seeking answers about his father’s disappearance. Yes, this sounds exactly like the plot of Hamlet, but the film is also in part an adaptation of Indian journalist Basharat Peer’s memoir Curfewed Night: A Frontline Memoir of Life, Love and War in Kashmir.

Haider has received worldwide critical acclaim and was the the first Indian film to win the People’s Choice Award at the Rome Film Festival. In a review of the film for The Guardian, Mike McHill says, “Radical Indian version of Hamlet gives the story compelling political angles and musical surprises. A palpable hit, in any language.” Best of all, you can watch Haider on Netflix right now. 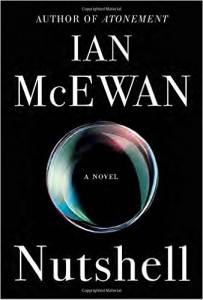 Here’s an imaginative twist on an old favorite. If you thought an 11 year-old Hamlet was young, then you haven’t seen anything yet. Ian McEwan’s retelling of Shakespeare’s Hamlet is narrated by a fetus. This fetus witnesses a classic tale of murder and deceit from within the womb: Trudy has betrayed her husband John and is sleeping with John’s brother Claude. Together, John and Claude have hatched a plan to rid themselves of John forever. But what can a poor fetus do to stop the murder of his father other than kicking his mom from inside her womb every now and then?

Please note that it is the 1994 original cartoon version of The Lion King that comes in at #2 on this list, and not the recent 2019 adaptation. The 2019 adaptation was pointless and should be avoided, despite Beyoncé and Donald Glover’s involvement in the project.

The 1994 Disney film, however, has become a classic in its own right, and who knows? In 400 years, perhaps we will look back on The Lion King with similar reverence to the way we look back at Hamlet now.

No? Is that taking it too far? Okay, fine, I’ll pull back a bit. But I will say that The Lion King‘s story needs no introduction. The tale of a young lion named Simba who returns to his kingdom to avenge his father’s death is one we know as well as the story of Hamlet that inspired it.

Have you still somehow missed Disney’s The Lion King and the catchy Elton John–penned tunes that go along with it? Where have you been? Go stream it on Disney+ today. 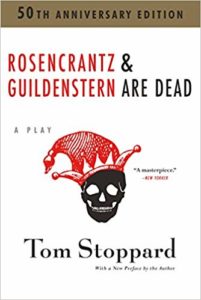 1. Rosencrantz and Gildenstern are Dead by Tom Stoppard

Coming in at #1 is the quintessential Hamlet retelling: Rosencrantz and Gildenstern are Dead. Tom Stoppard’s tragicomedy play was first staged at The Edinburgh Festival Fringe in 1966. Since then, the play has been performed countless times on Broadway and off-Broadway, adapted into a film and a radio play, and can basically be seen performed somewhere at any given time of the year. In other words, it’s a really popular play.

Stoppard’s play takes a look at the story of Hamlet from the perspective of two minor characters: Rosencrantz and Guildenstern. In this version, these two friends of Hamlet take center stage with only brief appearances from the major characters in Shakespeare’s Hamlet.

In 2017, Time Out‘s Andy Propst ranked Rosencrantz and Guildenstern Are Dead the 22nd greatest play of all time. Considering the fact that Shakespeare wrote at least 40 plays, 22 is pretty high up there. Spoiler: Hamlet was listed at #1.

Unfortunately, you might notice that the majority of these retellings are by men, which is one of the many reasons I’m so excited about Gillian Flynn’s upcoming retelling. The lack of retellings of Hamlet by women is especially troubling because the play has been criticized for its misogynistic undertones (“frailty, thy name is woman,” anyone?). So hopefully some more women will take up the torch soon and retell this story. Justice for Gertrude and Ophelia!