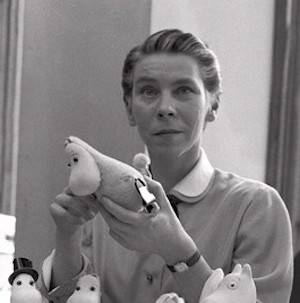 The first Moomin-book, The Moomins and the Great Flood, was published in 1945, shortly followed by Comet in Moominland. But it was Finn Family Moomintroll, published in 1948, that made Tove Jansson known internationally as it was the first of her books to be translated into English. The book became a bestseller and even attracted the attention of Walt Disney, who asked for—and was denied—the exclusive rights to the word “Moomin.”

The Moomin characters can be found everywhere. Moomin merchandise has been available since the 1950s and a daily comic strip is published in several international newspapers. There are Moomin coffee mugs, clothes, and hand towels, as well as a Moomin theme park, a Moomin opera, Moomin live action TV-series, and an immensely popular cartoon TV-series produced in Japan.

But what exactly is a Moomin?

A Moomin is a pudgy kind of troll with small ears, a big round snout, and a tufted tail. The Moomins live in the Moomin Valley.

The main character of the Moomin books is Moomintroll. He is a curious and adventurous boy who loves the sea and who collects shells and rocks off the beach. Moomintroll lives with his parents, Moominmamma and Moominpappa. Moominmamma wears an apron and a handbag and is the anchor of the family. Moominpappa dreams of adventures and wears a top hat.

Other characters in the books include, for example, Snorkmaiden, Moomintroll’s girlfriend; Snufkin, Moomintroll’s best friend and a vagabond who arrives with the spring and leaves with the fall; and Little My, a fiery, headstrong red-headed girl who thrives on chaos.

The characters and events of the Moomin books have touching points with Tove Jansson’s own life. For example, the first two books, The Moomins and the Great Flood and Comet in Moominland, are apocalyptic stories inspired by her experiences during  World War II. During this conflict, Finland as a nation was hit hard as it fought off two invasion attempts by the Soviet Union.

Parallels to Tove Jansson’s love life are also found in the books. Tove Jansson never married and never had children. Although she did have relationships with men, her two most important love affairs were with women—the already-married Vivicka Brandler and the woman who became Tove’s life partner, Tuulikki Pietilä.

Finn Family Moomintroll introduces the characters Thingumy and Bob, representing Tove and Vivicka. Thingumy and Bob always hold hands and carry a suitcase that they refuse to open. What is in the suitcase is only referred to as “the content.” The relationship with Tuulikki resulted in the introduction of the character Too-Ticky. After meeting Tuulikki, Tove Jansson wrote Moominland Midwinter, where Moomintroll wakes up from his winter hibernation. He discovers the Moomin Valley covered in snow and populated by creatures he has never seen before. His guide to this strange, yet familiar, world is his new friend, Too-Ticky.

If there is a message to be found in the Moomin books it is that what matters in life are the small things. These small things—a cup of coffee, a beautiful shell on the beach, a suitcase containing something precious— should be cherished because at any moment they can be taken away.

It is because of this multi-layered storytelling I continue to appreciate the Moomin books as an adult. There is no doubt that reading (and re-reading) them has made an indelible impression on me as a person.

I even have the tattoo to prove it.