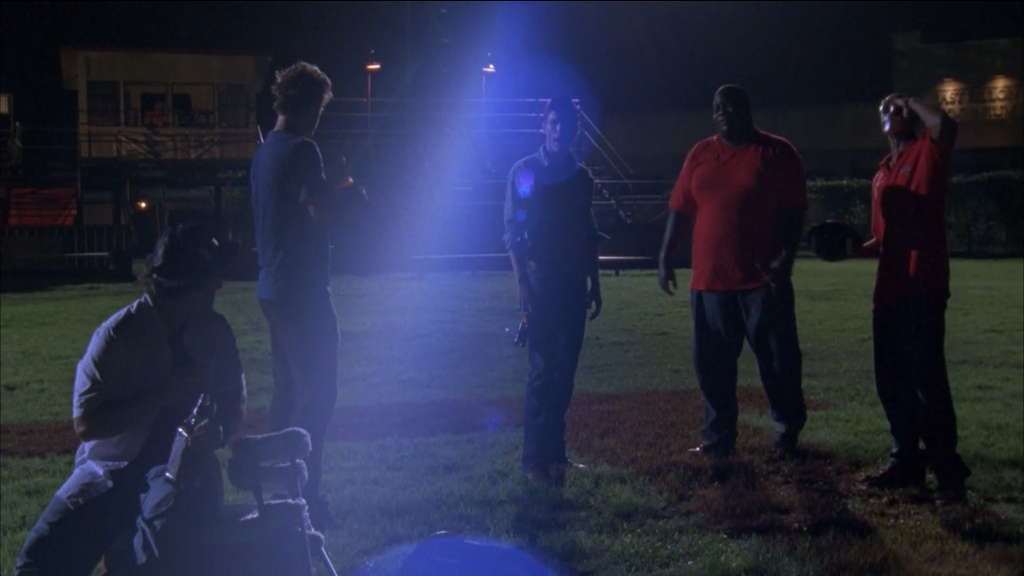 From cursed immortals to muck-crusted man-monsters, comic books have long been the source of not just caped crusaders, but those eerie denizens of the dark. And because Samhain is upon us, we decided it was time to check in with our Panelteers for a round-up of our favorite hellbound heroes and Faustian fiends!

Let’s just take a second to appreciate some Kirby naming genius. A dude named Jason Blood who in modern days is an occultist and demonologist is possessed by Etrigan The Demon, a terrifying horned monster with ties to the upper echelons of Hell. Oh, and he’s actually an immortal cursed by Merlin of all people and he used to be a part of King Arthur’s Court. He’s got an amazing costume and terrifying visage. He spits fire on the mic and also will for real spit fire at you. He’s just the best. Whenever Etrigan or Jason Blood show up in a story, you know things are about to get weird in the best way. Not to mention, one of the issues in the original Jack Kirby run has the best credits box I’ve ever seen which credited the inker with “Inks of Darkness by Mike Royer.” That’s just metal. Check out Jack Kirby’s The Demon for more.

Ted Sallis was a young biochemist who was tucked away in the Everglades attempting to recreate the Super-Soldier Serum which was responsible for creating Captain America. Betrayed by his lover and given up to AIM, Sallis destroyed his research and injected himself with the last remaining sample of his serum in an attempt to prevent his research from falling into the wrong hands. While escaping, he crashed his car into a swamp and emerged Swamp Thing the Man-Thing!

I have to admit, I’m a huge Swamp Thing fan but Man-Thing might be slightly cooler. Man-Thing is essentially a hulking pile of sludge who lumbers around swamps all day. Unlike Swamp Thing, he is completely detached from his former human persona – even if he wasn’t he can’t talk. Aside from being practically invincible, he can teleport himself and others through the “Nexus of All Realities”, and oh yeah… whatever knows fear burns at the touch of the Man-Thing! So, he can pretty much set anyone on fire because let’s be honest, he’s somewhat terrifying.

Despite being mute and only semi-intelligent, Man-Thing has been found hanging around Jennifer Kale and Howard the Duck, among others. He has also been a part of numerous teams such as The Defenders, The Legion of Monsters, The Daydreamers, and my personal favorite, The Thunderbolts. If you want to check out Man-Thing, I highly recommend picking up the Man-Thing Omnibus which highlights the definitive run by Steve Gerber. The fact that anyone could create a compelling comic book run based around a character who doesn’t speak is pretty amazing!

If I had been just a skootch gothier as a tween, I don’t think anything would’ve appealed to me more than Eve Eden. Princess of the Land of Nightshades, Eve signed up with the Suicide Squad in exchange for their help rescuing her brother from the evil Incubus who had conquered the land of her birthright. Long story short, Eve wound up defeating the Incubus and absorbing the Succubus who had tried to possess her, giving her a major power-up. So basically, she’s a) a secret agent who is also b) a princess with c) hair made of shadows who can d) fly and e) is a member of Shadowpact, a team made up of wizards and a talking chimp. Everything about that is glorious. Alas, Eve has never headlined her own book, but she’s been in great ensembles. Shadowpact makes for some nicely supernatural Halloween-ish reading – or, if you find political machinations spookier than demons (and who doesn’t?), you can’t go wrong with the original Suicide Squad.

Al Simmons was a soldier, he was betrayed and killed by his friend – and his country. He awoke in Hell, facing eternal torment, when he was offered a deal: a chance to return to Earth to see his wife and kids again. Al agrees too readily and is resurrected five years after his death. However, he is returned without his memories and his face, but with new powers and a costume. He quickly figures out that the deal he made is getting worse all the time. In fact, he finds out that he is just a pawn in a large game being played between God and Malebolgia, the King of Hell. But Al rebels against the limits set before him and begins to set about saving the world from the forces of evil – both supernatural and mundane – ultimately coming into direct conflict with the forces of Heaven and Hell. The elements are Shakespearian and Faustian, but conveyed through the pencils of 90s comics-superstar Todd McFarlane. The first thirty issues of Spawn were my (re)entry point to comics reading and Al remains one of my favorite characters. Check out The Spawn Compendium 1, which collects the first 50 issues of the series.

Okay, well. Eric and Chris are fired for nabbing Man-Thing and the Demon, two of my very favorite comic creations of any category. That said, I’m glad I got to scroll a little further in my rolodex and — Eric, Chris, why are you still here? Fill your cartons and be gone with you. I’m glad I can blow smoke about Johann Kraus, a fixture of the Bureau of Paranormal Research and Defense. Back in 2002, Kraus lost his body during one of those fiery seance accidents we’re always reading about in the papers. His physical body incinerated, he drifted along the astral plane, a ghost before his time. He eventually found shelter, tangibility, and agency with the B.P.R.D., settling into a special containment suit. Kraus has no face to speak of, so artists like Guy Davis and Tyler Crook render expression through body language and gesture. Similar to the DC Comics hero Deadman (another favorite), he can possess other forms, occasionally animating lifeless corpses. He was briefly a moose. He comes complete with the inherent tragedy of all dead characters “living” and crusading on borrowed time. That uncertainty only magnifies his soulful nature (heh), endearing him to me all the more. And, taking guidance from Kraus’ compassion, I suppose I’ll let Eric and Chris stay on. On a trial basis. Check out B.P.R.D., Vol. 1: Hollow Earth and Other Stories for Johann’s ethereal introduction.

Dan Cassidy was a stuntman just trying to do his job. While working on a film called Blue Devil, Dan was dressed in a state-of-the-art Blue Devil costume when a real demon broke loose and zapped him with some occult voodoo. Dan found himself trapped in the costume and began using the name of the film’s titular character as his own. Eventually, more interactions with creatures from Hell resulted in Dan’s cybernetic suit being turned into actual demon-skin. His mid-1980s series was light on horror and heavy on the absurd. Eventually, Dan became a member of a group called the Shadowpact and was even with the Justice League for a spell. His New 52 version is slightly different than before, but Blue Devil’s status quo as an actor / stuntman / special effects maven / demon remains. Check out DC Universe Presents Vol. 3: Black Lightning and Blue Devil for the introduction of the “new 52” Blue Devil.

The wrath of God bottled up in the ghost of former cop Jim Corrigan? Sounds like a recipe for hell on Earth — and some really fun comics storytelling. Hearkening back to the Golden Age of comics, the Spectre has been everything from a super-heroic Casper to a nigh-omnipotent cosmic entity. My favorite Spectre stories come from the early 1990’s series, written by John Ostrander and illustrated by Tom Mandrake.Mandrake’s heavily shadowed take on the character de-emphasizes the super-hero look to drench you in noir, while Ostrander’s melodrama bring the ghost of Jim Corrigan to the crossroads of his thirst for vengeance and the need for justice with a series of morally ambiguous dilemmas — the perfect “kryptonite” for an all-powerful avenging spirit.  I recommend checking out The Spectre: Crimes and Judgments, the first volume of the series, in which we learn that Corrigan has misunderstood his mission from the almighty. But even as the realization dawns, we’re left to wonder… can an old ghost learn new tricks?

One of my favorite movies growing up was Monster Squad: an 80s adventure comedy about a group of kids who protect their town from an invading horde of the classic Universal monsters. IT is most famous for the line “Wolfman’s got nards!” Ever since, I’ve been a sucker from a team of misfits saving the world from spooky occult beings.

That said, it took a surprisingly long time for me to be introduced to Hellboy and the B.P.R.D. (it started with a pie-and-movie night with my roommate). But once I met the World’s Greatest Paranormal Investigator, I was as smitten as one of his many kittens. I like Hellboy for a lot of the reasons I like Buffy Summers (who is definitely my favorite Halloween Hero, but as she started on the silver screen and not in the funny pages including her would be a bit of a cheat and Paul is firing people today so I’m not taking that chance), Hellboy is a fated character doomed to live just on the outside of normal human life. Heavy are the shoulders that wear the Right Hand of Doom. But despite his not quite being human, he revels in all the simple things: like cigars and pancakes and kittens. And he barrels his way through all manner of occult madness with the same exasperated sigh. He’s rough and prickly, but with a hero’s heart and nobility.

When the air turns crisp and the fallen leaves crackle under your feet and the streets are lined with the orange glow of jack-o-lanterns, there nothing better than curling up with a pile of Hellboy comics. Check out the Hellboy Library Edition, Volume One to get started.

From Hellboy: The Island by Mike Mignola (Dark Horse)

Those are a few of our favorite heroes, but there are so many more! Are you a Ghost Rider fan, or do your tastes run more toward Vampirella? Let us know in the comments: who are your favorite spooky comic book protagonists?