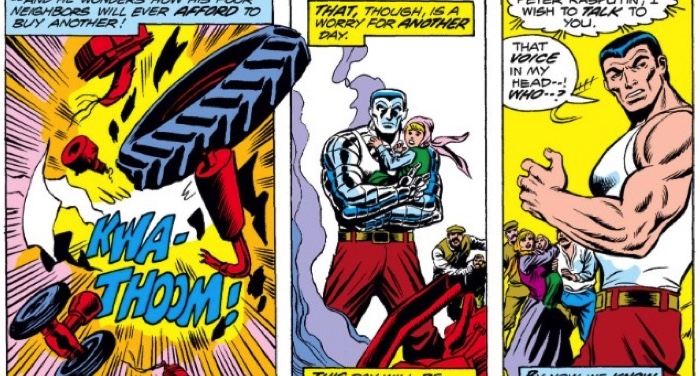 Is there any character archetype as quintessentially American as the superhero? Created by Americans to uphold American values at a time when American patriotism was not just an ideal but a duty, superhero comics have always been dominated by Americans and aliens (usually the space variety) who adopt an American identity and way of life.

But as the medium aged, DC and Marvel both sought to bring unique new characters into the fold. By the 1960s, this occasionally meant creating heroes from other nations, including Russia. Marvel unknowingly created the most famous of all Russian superheroes in 1964: Natalia Romanova, alias the Black Widow!

With the Black Widow movie swinging into theaters soon, this seems like a good time to take a brief look at the broader history of Russian superheroes in American comics.

As far as I’ve seen, Russians didn’t tend to show up in the 1930s and ’40s. I can only think of two significant examples.

First, there’s Boris, who was a member of Quality Comics’ Blackhawk Squadron for about two minutes. And second, there’s that one comic where Superman drags Stalin—emphatically not a hero—to the League of Nations.

But as soon as that war ended, another began, and any friendly feelings comic book creators may have had for our erstwhile allies flew out the window faster than a speeding bullet.

The Cold War, a decades-long political standoff between the Eastern and Western blocs, began almost immediately after World War II ended. Comic books dutifully redirected their ire from the now-defeated Nazis and Japanese to “the Reds.” This included everyone from behind the Iron Curtain, but especially the Chinese, Vietnamese, and Russians. Captain America, his glory days behind him for now, was so devoted to this new cause that his comics came with the tagline “Captain America…Commie Smasher” on the covers.

The 1950s weren’t a great time for superheroes. They were considered passé at best and degenerate at worst; only the very biggest names would survive. Creating new superheroes—of any nationality—wouldn’t become a priority again until the end of the decade.

Even if there hadn’t been a superhero slump, the idea that a Russian could be a hero would probably have melted the creators’ brains and/or pissed off the Senate even more. Russians were villains, period. The Black Widow knows this very well, as she was one of them.

The Black Widow debuted in Tales of Suspense #52 as a Soviet spy intent on sabotaging Tony Stark’s munitions factory. Her repeated failures caused her bosses to recall her to the Soviet Union for reconditioning/brainwashing. It wasn’t until Avengers #30 in 1966 that she broke through the brainwashing with some help from her former stooge, Hawkeye, and became a hero.

Did they also brainwash you into that outfit?

Cool beans! We finally have a Russian in a heroic role, all thanks to Marvel. But DC wasn’t far behind. Their earliest Russian hero was Leonid Kovar, alias Red Star, who debuted in Teen Titans #18 in 1968. (He wasn’t called Red Star back then, however: Leonid’s codename was Starfire until a certain alien princess in her alien attire upstaged him.)

Unlike Black Widow, Red Star did not renounce the Soviet way of life. He got over his initial dislike of the American Teen Titans, but he was still a loyal Russian superhero and stayed in Russia at the end of the issue. As such, he wouldn’t become a recurring character for a while yet. Still, he was most definitely a hero.

But Black Widow and Red Star were exceptions. Russians were still mostly portrayed as bad guys. Iron Man alone counted Crimson Dynamo (who quickly reformed, to be fair), Titanium Man, Black Widow (also reformed), Boris Turgenov, and Red Ghost—Russians all—among his enemies during this decade. If you wanted a comic with a Russian character that didn’t exist solely to dunk on communism, you’d have better luck with Gold Key’s The Man from U.N.C.L.E.*, and possibly Star Trek if you were lucky enough to find an issue that acknowledged Chekov’s existence.

*Not to “well, actually” myself, but the “Russian” character in The Man from U.N.C.L.E. might be Ukrainian. But that’s a whole other conversation.

Black Widow’s role continued to change throughout the ’70s. After briefly retiring in the late ’60s, she later returned and started hanging around with superhero teams like the Avengers and the Champions. More importantly, she ditched the fishnets and adopted her classic look.

In 1975, Marvel rolled out yet another iconic Russian hero. Colossus, the only character in this article who could give Black Widow a run for her money in terms of name recognition, was recruited into the new X-Men. 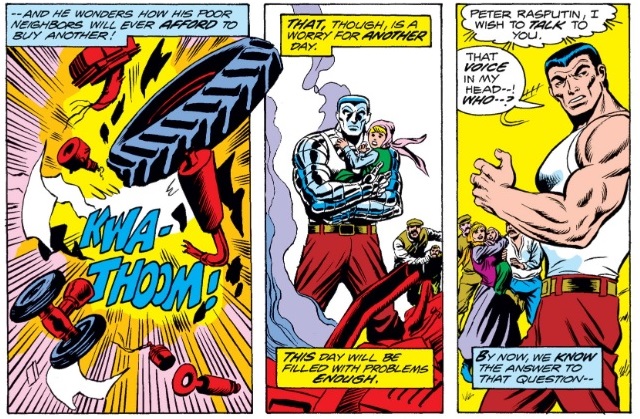 Speaking of names, yo, Marvel, Russians can have surnames that aren’t directly tied to the Revolution. Just sayin’.

Even though Colossus helped to revitalize the flagging Uncanny X-Men comic, screen adaptations have been less kind to our silver-plated farm boy. He has been passed over for almost every X-Men movie and cartoon to date. But he did score a prominent role in Deadpool and Deadpool 2! I’m sure he’s thrilled.

Crime fighting became a family affair for the Rasputin clan this decade, as Colossus’s little sister Illyana (the blond girl in the middle panel above) was aged up by the villain Belasco and eventually became the heroine Magik.

Over on the DC side of things, in 1987, they introduced the Rocket Red Brigade, a group of armored heroes tasked with being Russian. (The Soviets didn’t like the West having more superheroes than them.) The best member of the team is indisputably Dmitri Pushkin, alias Rocket Red #4, who later joined the gooftacular Justice League International. 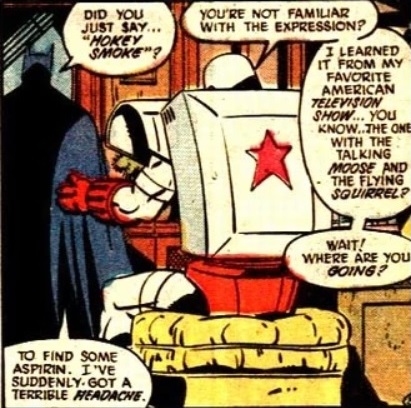 I would die for him.

Sure, he’s basically comedy relief, but so is the rest of the team. He fits right in.

Also in the late ’80s, DC introduced multiple minor Russian heroes in the pages of Firestorm. One of these was Mikhail Arkadin, alias Pozhar. If that name rings some bells for you, it’s probably because The CW’s Legends of Tomorrow turned him into a bad guy because…Russian? Yeah, we’ll talk about that more later.

The Soviet Union broke up in the early 1990s, effectively ending the Cold War. You’d think this would lead to some slightly better representation, and it kinda did. Red Star finally became a regular Titan, during which time he acquired a girlfriend who was also a panther and a son who was also a wildebeest. (IDK, it’s comics.) Then the girlfriend and son did what any self-respecting comic book family does: die horribly so Red Star could angst in space.

The 1990s also saw Marvel introduce the Red Room. Now a critical part of multiple characters’ back stories, the Red Room is a secret facility where the Soviet government trained little girls to be assassins and spies. Black Widow got her start there, as did Nadia van Dyne, who we’ll get to in a minute. But first…

DC published Birds of Prey #56 in 2003. This issue marks the debut of Aleksandr Creote, a former KGB operative who hooked up with the Birds of Prey before hooking up in a different way with his boss, Savant, in 2010. 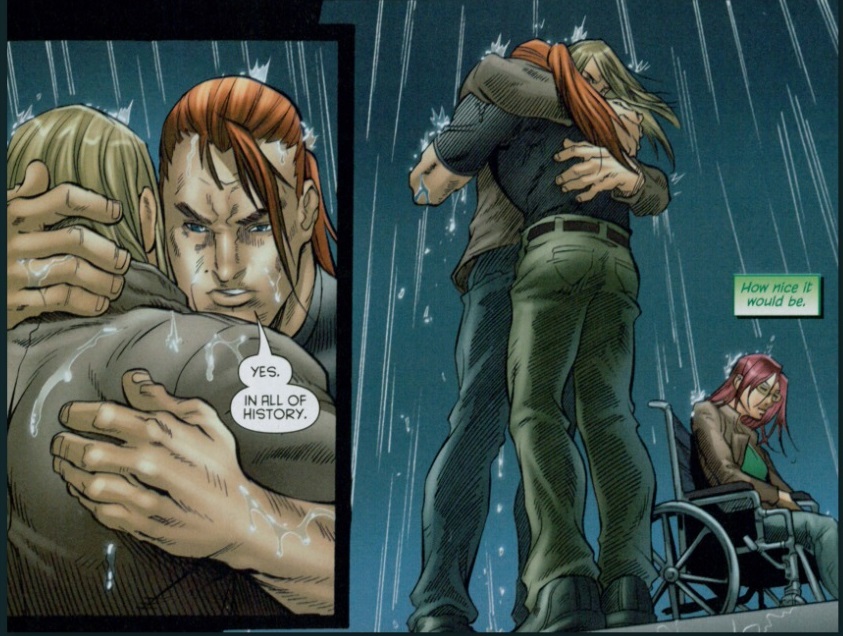 I don’t have anything in my eye, I’m just crying.

Surprisingly, this is not comicdom’s first gay Russian superhero. Marvel took that prize when they introduced a gay, alternate universe version of Colossus in Ultimate X-Men #1 in 2001. (And if someone came before that, I’m sure one of you will be happy to correct me.)

Speaking of alternate universes, DC published one of their most famous in 2003: Superman: Red Son. This “what if?” tale explores the consequences of Superman being raised on a Ukrainian collective farm instead of an American family farm. (So, again, not actually Russian, a fact they very briefly acknowledge in the book.) It’s a great concept, but unfortunately, it doesn’t take long for Supes to go from hero to dictator-for-life. A well-meaning one, to be sure, but brainwashing dissenters does not a good guy make.

One of the latest Russian superheroes to join the fray is Marvel’s Nadia van Dyne, alias Wasp. The daughter of Hank “Ant-Man/Giant-Man/Goliath/Yellowjacket” Pym, she was raised and trained in the Red Room. Despite this, she doesn’t have a pessimistic cell in her body. No friends? She’ll make some! No dad? That sucks, but she’ll honor his legacy as best she can! A giant robot is rampaging around Manhattan? Well, who doesn’t love giant robots? 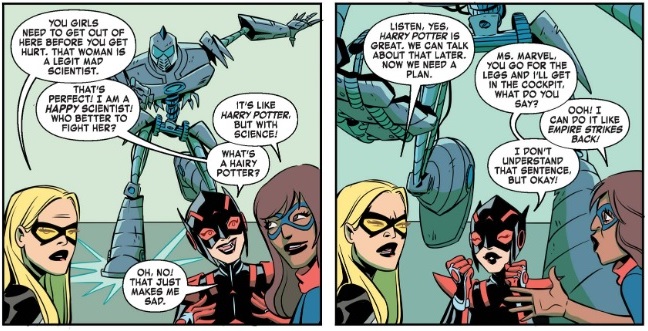 I would die for her.

DC, meanwhile, has continued the trend of “what if this character was Russian” stories. DC Comics: Bombshells revamped Supergirl and Stargirl as Russian sisters, while The CW’s Supergirl drew inspiration (title-wise, anyway) from Red Son for their “Red Daughter” storyline.

So in some ways, things have improved for Russian heroes since the dark days of the ’50s and ’60s. There are certainly a lot more of them than there used to be, and a couple are practically household names.

And yet, Black Widow and Colossus’s superstardom almost seems superficial. Legends of Tomorrow‘s treatment of Arkadin is highly suspect. And when other CW shows introduce plot lines about a foreign country posing a threat to America—Kasnia in Supergirl; Markovia in Black Lightning—that country inevitably speaks Russian.

(Or at least Google Translate Russian. I don’t know the language well enough to judge their translations.)

Marvel isn’t much better. In Agents of S.H.I.E.L.D. season 4, a Russian villain, the Superior, plays a major role. There’s a character named the Superior in the comics, too…but he’s American. In the first few episodes of Avengers: Earth’s Mightiest Heroes, Black Widow only has a Russian accent when she’s doing something suspicious; otherwise, she sounds American. (After a while, they ditch the Russian accent altogether, MCU style. But the villainous Crimson Dynamo gets to keep his accent.)

All in all, superheroes have almost as much reason to distrust Russians today as they did at the height of the Cold War. I doubt the Black Widow movie will make any seismic shift in this regard. She has always resided on the darker end of the heroic spectrum. Even in the ’60s, she was too edgy for the straight-laced Avengers.

She may be a hero now, but she still uses the same tactics she employed as a villain.

Part of this may be a remnant of the Cold War era; many of our most enduring comic book characters were created back then. It’s the same reason why superheroes are still mostly white guys. Even today, America and Russia are not the best of friends in the real world, so that gets translated into antagonism on the page. That’s how comic books (and entertainment in general) work. It’s not nice, and it’s not fair, but there it is.

What’s my point with all this? Is there a fix? Should there be? I dunno, I just don’t like seeing a whole country’s worth of people stereotyped and portrayed negatively on account of their government being trash. I mean, come on: comic books have created a wild and expansive universe of aliens, gods, mystics, and monsters, but they can’t imagine a world where “Russian” is not synonymous with “enemy”?