Bestselling authors Natalie D. Richards and Darcy Coates bring us stories that chill us to the bone and keep us up all night reading—haunting reads perfect for Halloween! A hitched ride home in a snowstorm turns sinister when one of the passengers is plotting for the ride to end in disaster in New York Times bestseller Five Total Strangers. From USA Today bestselling gothic horror author Darcy Coates comes The Haunting of Leigh Harker, a chilling story of a quiet house on a forgotten suburban lane that hides a deadly secret... 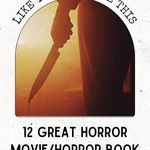 Why is being scared so much fun? Late last night, I finished the book I was reading, so I started what I thought it was going to be a murder thriller. But it turned out to be a supernatural murder thriller. So there I was, in the middle of the night, reading a book where scary things were happening. Doors and drawers were opening on their own, faucets turned on and off, and the main character suddenly felt the lightest touch of a cold hand on her neck. I WAS SCARED. But delightedly so. I love horror books.

Because I love fake scary stuff! I would not like to be in a house where a corporeal entity stood over me as I slept, nuh-uh, but reading about it pleases me to no end. And watching it does too. I love horror in all forms. Wait, no, I hate haunted houses. (Which is why James Han Mattson’s upcoming novel Reprieve scared me so much.) So lemme rephrase: I love horror in most forms. I read a ton of horror books and I watch a lot of horror movies.

But have you ever loved a horror movie so much you want to read/watch other things like it? Good news: there’s practically a read-alike for everything! Vampires, doppelgängers, haunted houses, ghosts — this list has those and more. Whether you want more book recommendations or movie recommendations, this post has a bunch of suggestions for horror fans! Some of them are being paired for very specific reasons, some for more general reasons. I tried to find books that haven’t already been adapted, and mostly used movies that didn’t come from books. I hope you enjoy being scared out of your wits as much as I did. And have fun sleeping with the lights on.

The Last Days of Jack Sparks by Jason Arnopp

These are about young people who don’t believe in the supernatural heading into scary situations, only to have it bite them on the ass. And it’s documented when it happens. Jack Sparks doesn’t believe the exorcism he’s recording for his YouTube channel is real, and boy is he going to be sorry.

Pairs well with The Witch:

It’s the late 17th century in Puritan New England. You’re a young woman with hopes and dreams, and ideas of your own. Which is a big no-no. Your family and your neighbors are all against you, and you feel like you haven’t a friend in the world. Except for that horned friend who talks to you. *Church Lady voice* Could it be Satan?

And here my friends, we have prime examples of why you don’t mess around with the lore surrounding supposed multiple murderers. Sure, it sounds like a fun party trick, calling out for ghosts, it’s a dare to scare your friends. But then the aforementioned entities actually show up and now you have a bloody time on your hands.

So you move into a large house, not aware of the stories surrounding the land or the house — this is not going to go well for you. In The Good House, it will cost a mother her son, and when she tries to find out just what happened in the home, it might also cost her life. Always ask the realtor what happened in your potential new home!

My Heart is a Chainsaw by Stephen Graham Jones

Pairs well with Friday the 13th, or any other slasher horror film, for that matter:

This book is a gift from the horror gods, because Jade, the teenage girl at the center of the novel, is a horror expert. She’s waiting for something terrible to happen in her town, because all the signs are pointing to it: creepy lake with haunted backstory, abandoned camp, new girl in town who is Final Girl material, etc. In between awaiting the impending doom that only she believes is coming, Jade explains a LOT about horror movie tropes in essays to her teacher.

When the Reckoning Comes by LaTanya McQueen

Pairs well with Get Out:

It is obnoxious how many books are being compared to Get Out. But this one is actually a good comparison! It’s a social horror novel about Mira, a Black woman, who is returning to her hometown to attend her friend’s wedding. Her friend is white and is having her wedding on a plantation, the site of the horrors of slavery over a century before. Mira’s complex feelings on the matter will be compounded by the horrors that occur once she arrives.

Pairs well with The Lost Boys:

Love stories about towns overrun with vampires? Like it when vampires toy with humans? Then check out this awesome book set in Mexico city, about rival vampire gangs, a vamp and her new human friend on the run, and the cops and criminals who are on their tail. Which shouldn’t be hard — just follow the string of bodies.

The Need by Helen Phillips

Pairs well with Us:

I am pairing these two up because of the doppelgänger aspect. Love getting freaked out by doubles leading someone else’s life? I feel like The Need doesn’t get enough credit as a psychologically terrifying novel about motherhood and losing control of your life. It has all kinds of weird stuff happening plus, yes, doppelgängers.

The Death of Jane Lawrence by Caitlin Starling

A whirlwind romance and marriage, followed by residence in a Gothic English manor, is a key plot point to both these. Jane enters a marriage of convenience with a doctor who forbids her from staying at his manor estate. Of course, she winds up there on the first night of their marriage and scary things happen! Will she stick around to find out what they are or will she hightail it out of there? (Spoiler: She stays. It wouldn’t be much of a story if she ran away.)

Pairs well with Midsommar (and The Wicker Man):

If you enjoy idyllic, serene village settings masking a horrible evil, then this is a great book for you! Theodore Constantine and his wife find the perfect home in the perfect New England town. They make new friends right away and are even invited to join the ancient festival of Harvest Home. They love their charming new life. But apparently they are unfamiliar with the expression “too good to be true.”

There is lots of zombie entertainment, but I believe this is the only one that can claim to have been written by a two-time Pulitzer Prize winner. A pandemic (sob) has destroyed the planet and brought on the rot-shufflers. And now NYC has been cordoned off to try and keep the zombies from spreading. But are the people really keeping them out, or being kept in?

If you loved the voyeurism of Paranormal Activity, or the senseless, methodical killing of Halloween, then this is for you! A new hotel is set to open, but someone doesn’t want it to happen. Instead, everyone working there is locked inside while someone roams the halls for twelve hours and kills off the staff. And all of it is being watched from the security room.

And if you love horror movies and horror books, check out more matching recommendations!