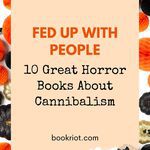 I accepted this assignment writing about great horror books about cannibalism for two reasons: 1) I have read a lot of books that have cannibalism in them (which is kinda hilarious considering I am a vegan) and 2) I could not pass up an opportunity to make cannibal-related puns, even if they’re in poor — wait for it — taste. (Sorry, not sorry, in advance.)

I’m not entirely sure when it was that I first heard about people who eat people (*sings* are the luckiest people in the world.) But my first real memory of reading about a person eating human flesh was this one rainy weekend at a family’s summer camp when I was 8, where I devoured a stack of totally inappropriate books for my age, including Alive, about the plane crash in the Andes. (I also read Helter Skelter, In Cold Blood, and The Amityville Horror — explains a lot, no?)

A few years later, I discovered Skeleton Crew by Stephen King, and…well, many of you don’t even need me to continue, you already know what I’m going to say. You’re like, “Uh huh, yep, THAT story.” But yeah, there’s a story called “Survivor Type,” and I won’t spoil it for you, but yep, it sure includes cannibalism. That story is burned on my brain.

And a few short years after that, cannibals became a household name with the release of The Silence of the Lambs by Thomas Harris, which starred everyone’s favorite cannibal, Dr. Hannibal Lecter. (Who had previously appeared in Red Dragon, but his role was much smaller.) (Also you cannot convince me that Harris didn’t name him Hannibal so it would rhyme with cannibal. He absolutely did.)

So if you have a taste for horror books about cannibalism, please join me in celebrating the literal pleasures of the flesh, and raise a nice glass of Chianti to these ten books. But content warning, remember that these are horror books about cannibalism, and most are not just limited to those horrors, so for some of these you definitely need a — these jokes write themselves — strong stomach.

No, seriously, while great, these books are also REALLY effed up. These are the kind of books where you can get nightmares just from looking at the covers. And please also note that like most horror, this sub-genre is mostly written by white, male-presenting authors, so if you know of any great diverse cannibalism horror, please let us know!

The Cannibal’s Guide to Ethical Living by Mykle Hansen

Renowned food critic Louis De Gustibus has found himself in a sticky situation — he’s being held captive by a cannibal named André. But André, like Louis, has a very discerning palate: he only eats rich people. And over a five-course meal, he’s going to try and convince Louis why more people should get on board his way of thinking. It’s a gruesome, silly satire that puts literal meaning behind the expression “eat the rich.”

There are many, many books involving cannibalism that feature families in remote, largely unsettled areas, who didn’t get the memo that eating people is a no-no. One such deeply disturbing book is Brother, about the Morrow family. For decades, the Morrows have kept to themselves, and when a girl goes missing here and there, no one thinks to ask them about it. However, 19-year-old Michael Morrow feels like he’s different from his family. But will breaking with tradition cost him his own life?

Claire Lambert is the only survivor of the cannibal massacre in Elkwood, Alabama, that claimed her friends. But for her and others related to the horrific events, the nightmares aren’t over. Because someone needs to pay for what was done to those people. This gore-tastic horror novel about cannibalism and revenge, which reminded me a bit of the “Home” episode of The X-Files, has a leg up (teehee) on other revenge novels.

Off Season by Jack Ketchum

Those of you familiar with Jack Ketchup, er, Ketchum, know that he was no stranger when it came to crafting seriously sick and twisted taboo tales. This horror novel set in Maine (because of course, so many are) is also about a family with a taste for human flesh. And there’s a beautiful New York City editor on vacation who ends up on their menu. Because a family that preys together stays together! A lot of this novel was expunged before its publication in 1980 because of the graphic content. However, new editions feature the whole shebang. Lucky us!

In a world of sick, demented books about people who eat other people, this might be the most disturbing, so gird your loins. Fifteen years ago, Joseph Miles was kidnapped and tortured by a sadistic killer with a taste for human blood. Joseph was lucky to escape with his life, but he thinks he also escaped with something else — a virus passed on to him from the killer that makes him crave human blood. At least, he is certainly acting like it now. (Remember what I said: This is seriously messed up.)

The Hunger by Alma Katsu

And you already knew this would be on the list, didn’t you? You can’t have a discussion about cannibals without the Donner Party. It’s the real-life group whose 19th century American cross-country trip devolved into chaos, starvation and cannibalism. (Although I read an article years ago claiming that stories of cannibalism amongst the Donner Party have not actually been proven. What’s next, there’s no such person as Santa Claus?!) Katsu takes the story of the ill-fated travelers and adds a supernatural twist to the tale. Because someone is making mince meat (pies) out of these weary people.

And this is a well-loved novel among people who enjoy horror books about cannibals. Martin, author of Lost Souls, brings together a serial killer and a playboy with forbidden tastes. This is one die-namic duo that no one wants to come to their rescue. Together they hunt who they consider the perfect victims around the globe, carrying out their hellish plans. And we are all the greener at the gills because of it.

And like The Cannibal’s Guide to Ethical Living, this is another excellent satirical horror story about cannibalism and a food critic. But this time the food critic IS the cannibal. Really, are you even good at your job as a food critic if you haven’t tried everything? Dorothy Daniels is certainly beginning to wonder that herself. A highly esteemed food writer for many years, she has always had a lust for life. But after decades of struggling in a mostly-male profession, she’s decided to embrace her inner Hannibal and live life to the fullest (stomach.)

The Cannibals of Candyland by Carlton Mellick III

Carlton Mellick III is a legend in the world of bizarro fiction, which is a sub-genre that often incorporates elements of absurdism, satire, and the grotesque. This novella, one of CM III’s best, is about a group of beings made of candy who look friendly. But they also happen to have razor-sharp teeth and like to eat human flesh. The shoe is on the other (edible) foot: the candy is going to eat YOU for a change!

The Silence of the Lambs by Thomas Harris

Ready when you are, Sergeant Pembry: Last, but not least, no list about horror novels involving cannibalism is worth its weight in (table) salt without The Silence of the Lambs. That would be like a list of great shark movies without Jaws. Hannibal Lecter is easily the most famous fictional cannibal of all time. He chewed his way into our hearts in this 1988 novel about an FBI agent who needs the help of one killer to catch another. Lecter is fun because he’s brilliant and mannered, and only eats people he considers to be rude. (Although I found him less interesting when Harris gave a reason for his taste for human flesh in a later novel. I liked him better when he was inexplicably a cannibal.) And like I mentioned, he did appear in Red Dragon, but you don’t have to have read that novel to follow this one. (But it is also good fun.) And if you are a Hannibal Lecter fan, make sure you don’t miss him in Michael Mann’s 1986 movie Manhunter. It’s the original adaptation of Red Dragon, which looks like Miami Vice with serial killers. It features a fantastic Brian Cox from Succession as Hannibal himself. (And also stars the always-amazing Tom Noonan and Stephen Lang.)

I hope you’ve enjoyed this list of horror books about cannibalism. And now for some bonus recs! If you want to learn more about cannibalism and cannibals, I highly recommend sinking your teeth into Cannibalism: A Perfectly Natural History by Bill Schutt, Man-Eater: The Life and Legend of an American Cannibal by Harold Schechter, and The Indifferent Stars Above: The Harrowing Saga of the Donner Party by Daniel James Brown.