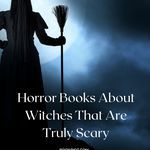 Are witches and witchcraft scary? Plenty of books are filled with magic and the supernatural, presenting witchcraft with more of an air of wonder than horror. But even comics like The Chilling Adventures of Sabrina (and Netflix adaptation of course) acknowledge that there’s a dark side to magic. Then of course, there are horror films like The Witch, Suspiria, The Blair Witch Project, and The Craft. These films are legitimately dark and creepy, and they remind us that, yes, witches are totally scary!

So what are some books that delve into the scarier side of all things witchy? Here are 8 horror books about witches that amp up the dark and creepy factor of magic, the supernatural, and witchcraft. Grab your black cat (a witch’s best companion) and settle in for some wonderfully scary witchy reads.

Goddess of Filth by V. Castro

If you love The Craft, you’re going to want to pick up a copy of V. Castro’s Goddess of Filth. Lourdes, Fernanda, Ana, Perla, and Pauline aren’t technically witches, but they are five Chicana best friends living in San Antonio, Texas, who get into some seriously witchy activities…with major consequences. One hot summer night, the friends decide to hold a séance, and it’s all fun and games until Fernanda starts crawling on the floor and chanting in Nahuatl, the language of their Aztec ancestors. Over the next few weeks, Fernanda’s behavior gets stranger and stranger, and it’ll be up to the “bruja Craft crew” to save her.

Thomas Olde Heuvelt’s Hex is set in Black Spring, a town haunted by the Black Rock Witch. The witch is a 17th century woman who walks the streets and appears in people’s homes with her eyes and her mouth sewn shut. The town has been put under quarantine to keep the curse of the Black Rock Witch from spreading. But when the teenagers grow tired of the strict regulations and go viral with the haunting, it pushes the town back into the dark practices of its past.

The Year of the Witching by Alexis Henderson

The Year of the Witching is another story of a town cursed, but this is a historical horror/fantasy about a town named Bethel. Bethel is a place where the Prophet’s word is law, and our protagonist Immanuelle Moore’s very existence is blasphemy because her mother is white and her father is Black. Immanuelle tries her best to keep her head down and follow the word of the Prophet. But then she founds herself drawn to the forbidden Darkwood surrounding Bethel, where the first prophet once chased and killed four witches. The spirits of the witches still lurk there, and they have a surprising connection to Immanuelle and her dead mother.

Burn the Dark by S.A. Hunt

S.A. Hunt’s Burn the Dark is a cross between Chilling Adventures of Sabrina and Stranger Things. Robin’s witch-hunting YouTube series becomes widely popular and praised for its realism. Robin’s secret? The show isn’t fictional. It’s all real. Robin’s ultimate goal is finding revenge against a coven of witches who wronged her mother years ago. Now she’s returned home to the rural town of Blackfield, where unexpected threat that goes by the name “the Red Lord” interferes with her plans.

All the Murmuring Bones by A.G. Slatter

All the Murmuring Bones is a great novel for those who love when fairytales get sinister. In this gothic fantasy tale of dark family secrets and witches, Miren O’Malley’s family has sparked a deal with the merfolk. For a long time, they have prospered because of it, but now the family is no longer able to keep their side of the bargain. In order to maintain power and status for the family, Miren’s freedom might hang in the balance.

The Lighthouse Witches by C.J. Cooke

The Lighthouse Witches is a new horror novel set on a remote Scottish Island. Single mother Liv is has come to the island with her three daughters, Luna, Sapphire, and Clover, to paint a mural in a 100-year-old lighthouse. Liv is excited to have a chance to start over with her family, but the locals warn her about wildlings and supernatural beings who lurk on the island. And after two of her daughters go missing, Liv discovers that the cave underneath the lighthouse was once a prison for women accused of witchcraft. This novel comes out this October, so mark your calendars!

Here’s another new horror novel, out this month! Katrell has the power to talk to the dead, and she’s been using that ability to pay the bills and support her unemployed mother. But her magic is starting to attract the attention of those who have passed on to the other side, and these ghosts have a message for Katrell: Stop now, or there will be consequences. Then Katrell accidentally raises someone from the dead, and she starts to realize that magic has its consequences.

This last book is a terrifying graphic novel in which you’ll discover everything you thought you knew about witches is absolutely wrong. Namely, they’re way scarier than you think they are. Wytches follows the Rooks family who moves to the remote town of Litchfield, New Hampshire, to escape their traumatic cast. As is the case with a lot of horror story protagonists, this family is looking to start over. But they’re not alone. Something is lurking in the woods. Watching them from the trees.

Want more witches in your reading? Get your hands on these witches in comics, the best witch romance books, and a cauldron full of YA books about witches.