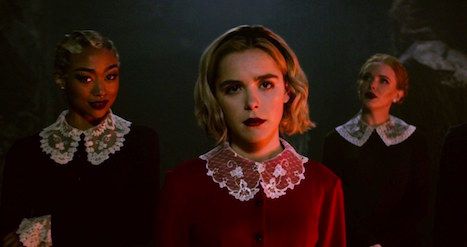 Have you finished watching Chilling Adventures of Sabrina on Netflix yet? It is SOOOOOOO good!! In case you didn’t know, the series is loosely based on the amazing reboot of Sabrina: The Teenage Witch, from Archie Comics. However, in the wise words of my partner who watched the series with me: “This is not your mother’s Sabrina.”

Yeah, then I realised *I* was the ‘mother’ he was referring to. And yes, this is *NOT* the Sabrina I remember reading as a kid. 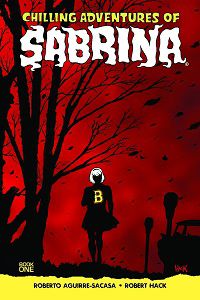 Both Chilling Adventures of Sabrina and its partner-in-horror Afterlife with Archie are created by Roberto Aguirre-Sacasa, with artwork by Robert Hack (Sabrina) and Francesco Francavilla (Archie). Where Archie feels like a bit of fun, I am very happy to say Sabrina creeped me right out. And while the Netflix series does not follow the script of the comics perfectly, it has definitely captured the darkness, the scare-factor, and the general outright psychological mind twist.

Now, if you have finished watching Sabrina on Netflix AND have also read the source material, then you are in luck. We have our own little ‘coven’ of horror comics to keep you going. 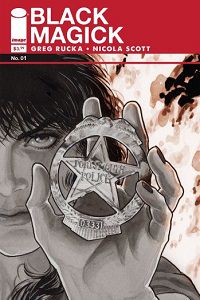 This is my favourite occult/witchcraft comic series, pairing the tight writing from Rucka with the exquisite art from Scott. It centers around your standard Portland cop who is also a witch balancing her spirituality with mainstream society. Both Rucka and Scott are doing their research and showing the utmost respect to the Pagan/Wiccan community, with subtle nods to contemporary witches in their supernatural world. The story is compelling and the characters draw you into their dialogue with a feeling of genuine relationships. But the ultimate sales-point is Scott’s art. The detail she puts into things, like EYELASHES, is just amazing! And while the black-and-white suits the storytelling, I love the use of colour highlights; a hint of green here, a touch of blue on the spellwork. Less teen issues of Sabrina, more mature Wiccan mayhem.

There is no way I can do a better summation of Infidel than already provided by fellow Book Rioter S.W. Sondheimer: read it here. It’s a modern horror story about an American Muslim woman and her neighbours in a building haunted by these things who are fueled by racism and xenophobia. You know, the real monsters. I’ll be honest: It’s brutal and very close to our current environment but that is part of what makes it such a good read. In the same way Sabrina addresses feminism and blind faith, Infidel addresses racism and terror. 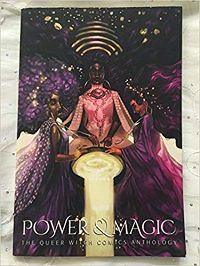 This is The Book for Book Rioters. It is a powerful anthology of comics about queer witches of colour, each with their own story but they all come together beautifully under the compilation by Joamette Gil. Not all comics about witches are horror comics but this touches on enough horror-related issues to make the list. Originally a Kickstarter project, the anthology is now available far and wide—which is exactly how it feels in its diverse characters and story-telling. Every main character is queer and all are POC. It is the perfect anthology of stories to show how personal magic is, and how it relates to our feelings. My favourite story would be “Your Heart Is An Apple”; my own heart twinged a little at the line “I don’t want my heart to be a weapon”.

She Wolf, By Rich Tommaso 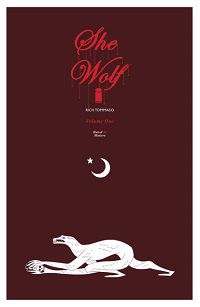 She Wolf has received some mixed reviews across the internet but I can definitely say it is true to itself. The surreal and symbolic-infused artwork supports the storytelling, with a gothic and unorthodox dive into the mind of a teenage werewolf. This is old school classic horror-monster storytelling with an emotional twist plus YA angst. If you pick up Volume 1 of the TPB, there is the bonus Dracula story to tie in with the main theme. I loved how this bonus really tied the artwork together as well; mainly because I was too slow to recognise why the main artwork was making me think of classic horror movies. I know, I know. Just trust me on this one. 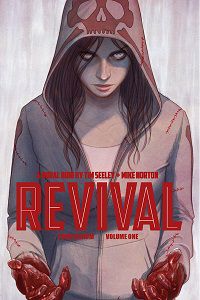 This was suggested by my LCS last year for Halloween. I am buying the TP volumes slowly and taking my time, with the full knowledge that it will end and I don’t really want it to. The pacing in each issue is brilliant. Once again, the muted colours help with the very graphic scenes depicted. And there are a lot of scenes that are purely “scenes” without any need for description. This is not your standard zombie or occult reading material. There is a lot of relationship building here, facing the same internal battle of “which side of the zombie-war should I be fighting on?” I can totally see Sabrina and Em sitting down for milkshakes, sharing stories with each other. 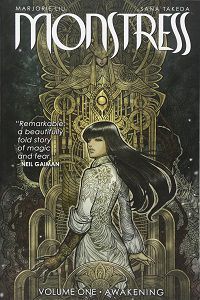 Monstress is a visual onslaught that attacks your senses and drags you, willingly, into the depths of its spirituality while covering you in layers upon layers of magic and mayhem. There is a power within the words and there is a power within the imagery. And then there is something completely else in the characters who carry the story along. In the same way the imagery of Chilling Adventures of Sabrina can be overwhelming, Monstress is not a comic book to sit down and casually read with a cup of tea. It is perfect for curling up on the couch with a blankie and a rich hot chocolate. And a few opportune shielding spells over your windows. Just for good measure. 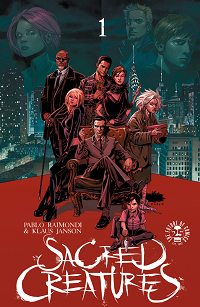 Witchcraft is often associated with Old Powers and Old Magic. The kind of stuff so old, no one can really remember how it goes anyway. This is the exactly what Sacred Creatures is working with. We’re talking old school, Old Testament, OLD powers. The Nefilim are on Earth, walking amongst us. Previously, they had a Warden to keep them under control. After putting up with this standard for thousands of years, a small group of Nefilim (akin to the Deadly Sins) wants to break free. Through supernatural methods, old mythology, and occult storytelling, we start to see exactly how far they can go without someone to watch over. Which of course leads to the question: How Far Would Humans Go? There are a lot of confronting issues about being a human, especially with Free Will—a key factor for Sabrina in her Netflix series. It’s interesting how ‘free will’ is always the selling point but no one is ever willing to actually give it to us. 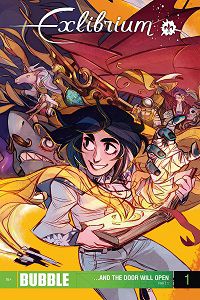 Stepping away from the muted colours of most horror comics, Exlibrium comes at you with a vibrant feel and a softer touch to its characters. This Russian comic (translated to English) has Western/Manga hybrid artwork and European storytelling. It starts with two supernaturally powered individuals fighting a Cerberus in a relaxed style while chasing a woman in hot red motorcycle gear (yes, like Sabrina’s signature coat). What caught my eye was how it still kept the occult themes with even twist of supernatural and comical geek. Think of it as a lighter touch, if Sabrina spooked you a bit. 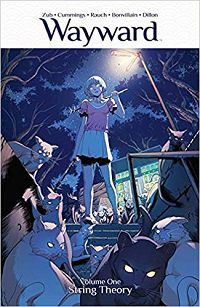 Look, I’ll be honest. At this point, I am starting to tire of seeing so many horror comics with a young female protagonist yet again written or illustrated by an older male. However, I really love the level of research Zub and Cummings have brought to this series. It was recommended to me by a Japanese friend who is a huge fan of manga, but I am open to discussion from other readers. I especially love the detail in the Japanese lore, adding great depth to the importance of identity in traditional Japanese occult. Cummings artwork really encourages the creep factor, with a feeling that is akin to The Ring. 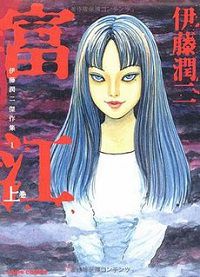 Speaking of Japanese horror, this is the most horrifying comic I have ever read. I am kind of hating on the person who suggested it to me but since I was the idiot who specifically asked their opinion on the best horror comics…They did not fail. Ito has created many amazing and horrifying works but Tomie is considered the epitome of J horror, a sub-genre all of its own (if this is your thing, you are probably familiar with Gyo which is a big NOPE from me). Tomie is a mysterious woman who can seduce any man and drive them insane—to the point of killing her. Thing is: she doesn’t actually die. In fact, she respawns copies of herself from the dismembered parts. The scariest part is not the violence against Tomie (though, that is horrific); I was horrified by the depiction of society’s response to the violence—frighteningly true, in some cases. You think feminism is an issue in Sabrina? Get ready for a long discussion about gender, violence, and expectations with Tomie.

Through the Woods, Created by Emily Carroll 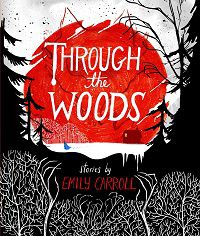 Carroll has created an anthology of short stories, brought together with the delicate touch of common themes and elements. There is a distinct fairytale-esque feel to Carroll’s storytelling, with a feeling of dread and horror rather than grotesque. This is more about feeling the Wolf behind Little Red Riding Hood, rather than seeing him. And it works so well, especially with her artwork. There is an innocence to her artwork that creeps up on you; similar in style to how Sabrina creeps up in the more troublesome scenes. Definitely one to watch for more online content. 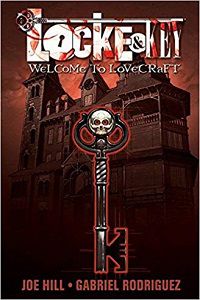 If you thought Sabrina’s family was messed up, come and meet the Locke’s. Warning: this starts with violence. A lot of violence. Essentially, Dad is fridged and the grieving widow and kids move to his family homestead in Maine. Hill and Rodriguez have created one of the best ‘Haunted House’ storylines I have read in a long time. I loved it as much as the Spellman’s house. And while I know it is all horror fiction, the dialogue between the characters makes it all feel very real. This really hits you when you go from genuine dialogue to the intensity of Rodriguez’s artwork with the supernatural. A beautiful balance that keeps the story moving. 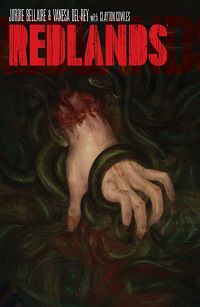 To round out my coven of horror comics, I can’t help but recommend Redlands and its own coven of witches. Here is small-town horror with occult powers and a group of strong women who are not putting up with your crap anymore. The storytelling is as strong as its characters; Bellaire is not going to hide from society’s issues and she will make you face the horrors of society. Del Rey’s scratchy artwork brings a grittiness to the story, making the vengeful violence a little more poignant. If these witches ever meet up with Aunts Zelda and Hilda, I think it would be a very different dance under the Moon.

Have you finished Chilling Adventures of Sabrina? Any suggestions of your own to add to our list? Tell us in the comments!!