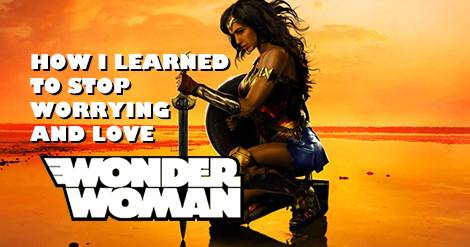 Confession time: I have been reading comics off-and-on for about three decades, but I’m not sure I ever read a Wonder Woman comic until about a year-and-a-half ago. I definitely read comics in which Wonder Woman appeared, but never one in which she was the headliner.

She wasn’t alone in this regard; I could probably name a dozen major superheroes—especially on the DC side—that I have never read in their own book. But, not reading Wonder Woman feels galling in a way not reading Green Lantern doesn’t. She’s a part of DC’s Trinity, I watched reruns of her TV show as a kid, and her merchandising is everywhere. How did I never read a story about her?

I could offer a lot of excuses, but when I get down to it, Wonder Woman just seemed boring. My primary frames of reference for her were a TV show that aired its final episode before I was six months old and the various iterations of the Super Friends cartoons. To me, Diana was thoroughly hokey ’70s. (I was, alas, a bit too old to catch the Justice League cartoons when they first aired.) Add to that DC’s poor history when it comes to publishing Wonder Woman trades (I don’t recall ever seeing one in a bookstore until the New 52), and it’s not that surprising I didn’t jump on the Wonder Woman bandwagon.

As time went on, though, I realized something: so many of the comics on my pull list were overtly feminist works starring women leads, often written or illustrated by fantastically talented female creators, but I still had never read Wonder Woman. I knew I needed to fix that. 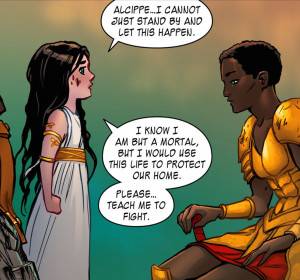 The Legend of Wonder Woman, art by Renae De Liz and Ray Dillon

Upon the recommendation of fellow Book Rioter Katie Schenkel, I checked out the digital-first series The Legend of Wonder Woman by Renae De Liz and Ray Dillon, and I am ridiculously happy I did. The Legend of Wonder Woman is simply wonderful: the art—pencilled by De Liz and inked and colored by Dillon—is stunningly beautiful, and the story made me love Diana soooo much. Here’s a tiny princess, being groomed for a life of comfortable leadership, who instead demands she be taught to fight so that she can protect her people and her land, and who genuinely follows through as she grows up.

That’s when I realized I had Diana wrong all these years. She wasn’t a generic Charlie’s Angels wannabe in a Captain America knockoff outfit; she was a dynamic force of nature, with more depth and history than most comics characters could ever hope for. She was genuinely a thing of wonder, and I suddenly wanted to read ALL THE STORIES.

So I dipped my feet into different eras of Wonder Woman, reading a bit here and a bit there, checking out tellings and retellings of Diana’s origin story and following her through various reimaginings. There has been so much to love, from the genuinely radical Golden Age stories, to George Pérez’s first arc, which perfectly captured the foreboding of the Cold War, to Greg Rucka’s Hiketeia, which pits Diana’s pacifist ideals against Batman, to Jill Thompson’s The True Amazon, which offers a dramatically different take on Diana’s origins (and might just be the most beautiful Wonder Woman book ever made).

After years of avoiding Diana, I am now totally in love. I find myself wishing once more for that Holy Grail of comics: a DC equivalent of Marvel Unlimited, so that I could dive head first into Wonder Woman like Scrooge McDuck into his money bin. In the meantime, I’ve been keeping my eyes peeled for affordable trades and ComiXology sales.

Fortunately, now is a fantastic time to be a Wonder Woman fan. With her massive big screen success, so much that has been out of print for decades is being reprinted and made accessible to new generations of readers.

If diving into decades of Wonder Woman’s adventures has taught me anything, it’s that she was never boring. She has been absolutely incredible—a veritable thing of wonder—since her first appearance 75 years ago. We just weren’t ready for her.