In Ling Ma’s Severance, Candace Chen works at her publishing job in New York as Shen Fever rages around her. She chooses to stay in the city despite the worldwide plague that’s turning people into looped, robotic versions of their former selves. Unlike some of her coworkers, she has nowhere in particular to go. Having lost both her parents years earlier, she has little family to speak of. Her parents were immigrants, and her connections to her relatives in China are feeble. Eventually, she completes the terms of her work contract, leaves the city, and joins a band of survivors whose leader is a little, shall we say, cultish.

Earlier this year, I read Severance. Then I made some changes. 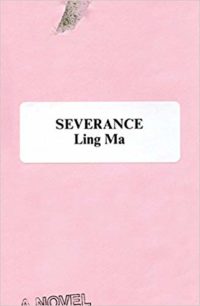 The day I finished Severance, I quit a job I’d depended on as a primary source of income for years. This wasn’t a direct cause-and-effect situation. I’d been planning on quitting the job for a while to pursue writing full time. Planning on quitting that day, in fact. But every other time I’d tried to quit, I’d found myself caught in a loop.

Here’s what would happen: I’d tell myself that I would quit as soon as I had enough writing samples, contacts, and regular freelance work to subsist on. I’d tell myself that I was lucky to have a job I could stand. That I actually enjoyed my job a lot of the time. I couldn’t just quit. But eventually, my plan would fall apart. I’d feel tired out. Lulled into a sense of numb satisfaction. Incapable of doing creative, interesting work outside of my job.

This wasn’t a new problem for me. I suspect it’s a continual issue for many people. I’ve always teetered between the desire for comfortable work and meaningful work that needs to be wrenched uncomfortably from the depths of the soul. (I mean, yes, that’s how it feels sometimes.) I’ve often found satisfaction, and even a kind of meaning, in the small details of daily routine—water cooler or Slack chat, hellos to coworkers, getting “in the zone” with a relatively brainless bit of labor. By contrast, trying to make it full time as any kind of writer or artist has felt like shaky and dangerous ground.

Reevaluating My Relationship to Work

In Severance, Candace has a fraught relationship with work that I recognize in myself. She cherishes routine and security. You could perceive some of her actions as lazy and unmotivated. She doesn’t have much in the way of clear ambition. At the same time, she’s an excellent worker once she gets started on something.

After Candace joins the survivors’ group, her behavior isn’t so different. She goes along with the group but keeps to herself. This incurs the displeasure of the group leader, Bob, who wants her to be more of a team player. She discovers she may have an in with a sub-group of survivors keen on escaping Bob’s reign, but they, too, question her loyalty.

I know that I’m far from the only person who finds it stressful to fake loyalty to a workplace or social group. But something specific about Candace’s behavior resonated with me. Nothing is obvious to her except what’s right in front of her. She scopes situations and develops her desires based on what she can make of them. She operates on pure survival instincts. This may not be true in the sense of basic survival; she sometimes doesn’t seem to care about her own well-being. She’s intuitive and slow to action, but practical and adaptable.

In other words, she’s ready to survive for the sake of what feels right. But sometimes, maybe, nothing does.

I exist in my current form because my father and grandmother immigrated from Korea to the U.S. Reading Severance, I began to wonder if my ability to relate to Candace was an Asian thing, or an immigrant family thing. Maybe it was connected to the feeling that, despite my best efforts against it, others perceived me as an industrious model minority. Maybe I related to cherishing any sense of security and routine, to real community always seeming elusive.

I always meant to rebel against the stereotype of the hardworking Asian. I thought I’d done so successfully. After all, I’d studied creative writing, dropped out of college, never took a math class after high school. But reading Severance made me wonder if I’d really escaped. Maybe I’d fallen right back into some trap, regardless of whether it was an Asian thing or not.

Something else occurred to me, too: I’d never before quit a job for reasons that were entirely based on my own satisfaction or lack thereof. I’d let go of and clung to jobs and school for reasons surrounding reciprocated or unreciprocated love, been laid off, temped, moved between cities and states. But I’d never simply quit a job because it didn’t feel right, or because I wanted more time to do something else.

Funny, because I was in my late 30s and relatively privileged—not with much in the way of savings, but not without my safety nets, either. I’d thought at one time that after completing an English degree I’d get an MFA, teach and write and stay in that world forever. But I didn’t find any sense of community in college, either, and I took the passive road out of that, too, taking a semester off for health reasons and never returning. My motivations for being unmotivated were as mysterious as Candace’s, whose money left after her parents’ deaths should have ensured her ability to pursue any path she liked.

Accepting That Routine Wouldn’t Give Me Real Security

Ironically, I realized, it’s Candace’s keen focus on security that threatens to put her in danger. It’s one thing to be indecisive and solitary in an office with a benevolent boss and fellow employees. It’s another thing entirely to be that way around a power tripping man who’s won the obedience of everyone you know.

I won’t include spoilers here, but near the end of Severance, Candace’s dead mother speaks to her a few times. This happens either in dreams or genuine visitations. Her mother explains that Candace is no longer safe, urges her to remove herself from a dangerous situation. It occurred to me then that maybe there had never been a right moment for Candace to walk out on her current circumstances. Her circumstances had never been ideal. Neither had her opportunities to escape them. But if she’d quit her job, or gotten out of the city sooner, she might have avoided her present situation.

It also occurred to me that it’s been my own desire to feel safe that’s kept me at jobs that were fine, enjoyable even, but not suited to me. At the same time, while I’ve been basically, physically safe, I’ve never really felt secure anywhere. Not in any professional or school group, not at any job.

Of course, some of this is just what’s happening to everyone right now. Burnout (millennial or otherwise) and climate anxiety make the value of building security for oneself seem questionable. I’ve never known what the right route was to take amid uncertainty. I’ve never known how to try to get to a better place. And things seem especially bad now. What didn’t occur to me, though, was that maybe there wasn’t a right route, maybe there were just a number of sort of wrong routes. Maybe I needed to do something that felt wrong if I was going to figure out how not to be stuck where I was forever.

Severance is a wonderful and complex novel. I have no desire to explain it solely in terms of its connections to my own life, or to use it to moralize regarding other people’s. The small push it gave me to change my attitude towards work didn’t feel like a revelation. I would probably have quit my job that day anyway. But I was receptive to something in Candace’s story, something that helped me feel okay about my decision. Since then, it’s been up and down. I’ve made some steps forward in my writing but haven’t arrived anywhere yet. I’m still figuring it out.

Giving up security is no joke. It’s not a measure of someone’s worth or courage. Not necessarily a momentous act. Certainly not something anyone should be criticized for not doing. So many people don’t even have their most basic needs taken care of. Some people absolutely need routine for mental or emotional reasons, and I still hope to establish my own. I’ve been lucky for this chance to give priority to pursuing the kind of uncertain work I want, to test my limits without putting myself in real danger.

I still feel the need for a sense of security, but instead of taking refuge in a shared routine with others, I’ve begun to take refuge in the only place where I’ve ever found any real sense of community or direction—in books. Writing literature and writing about it isn’t necessarily the most lucrative niche, of course. But it’s becoming a foundation I can maintain even if I do have to take on a regular job again.

My future, like Candace’s, is uncertain. But it always has been.