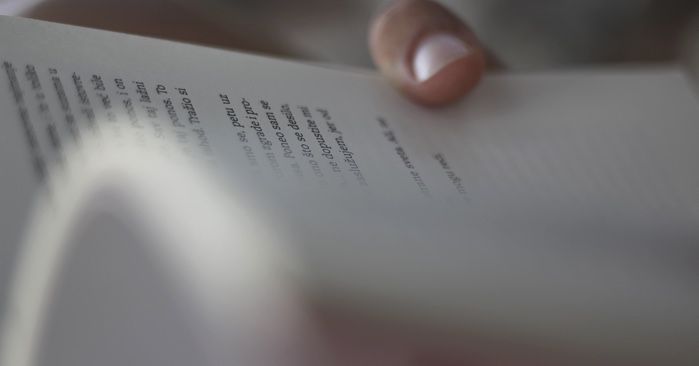 Have you ever read a poem and wondered why a poet broke a line after a specific word? I don’t just mean song lyrics where, by and large, rhyme scheme and meter are dictating everything. Maybe you were reading Rupi Kaur or Amanda Gorman or Walt Whitman. Maybe you were scrolling through your Instagram feed and stopped on a piece of poetry that spoke to you. Why are those particular line breaks in that poetry?

Unless you’ve taken poetry classes, you likely wonder how, exactly, are you supposed to read a line break? Pause briefly? Take a breath? Keep reading like it was prose? The answers are as varied as poets and poems, but here’s a brief guide on how to read line breaks in poetry.

The most obvious use of line breaks occurs in various forms. The Shakespearean sonnet, for example, uses an iambic pentameter meter. This means each line has ten syllables with accent on the even-numbered syllables. This form also uses a strict rhyme scheme of ABAB CDCD EFEF GG. So in this case, the line breaks are dictated by the form.

Shall I compare thee to a summer’s day?
Thou art more lovely and more temperate:
Rough winds do shake the darling buds of May,
And summer’s lease hath all too short a date;
Sometime too hot the eye of heaven shines,
And often is his gold complexion dimm’d;
And every fair from fair sometime declines,
By chance or nature’s changing course untrimm’d;
But thy eternal summer shall not fade,
Nor lose possession of that fair thou ow’st;
Nor shall death brag thou wander’st in his shade,
When in eternal lines to time thou grow’st:
So long as men can breathe or eyes can see,
So long lives this, and this gives life to thee.

Check Your Shelf Newsletter
Sign up to receive Check Your Shelf, the Librarian's One-Stop Shop For News, Book Lists, And More.
Thank you for signing up! Keep an eye on your inbox.
By signing up you agree to our terms of use

The haiku must stick to three lines comprised of of five syllable, seven syllable, and five syllables. The obituary form that Victoria Chang adopted in OBIT was driven in large part by making sure each poem had the shape of a newspaper obituary. The prose poem uses no line breaks whatsoever. The Golden Shovel form created by Terrence Hayes uses the end words of each line to quote another poem. The ghazal is made of couplets with each couplet ending in the same word preceded by the couplet’s rhyming word. In this case, the poet has freedom to break the first line of each couplet as they see fit, but the end of the couplet is dictated by the form.

But what if the poem you’re reading doesn’t stick strictly to a form? Or what if, like the ghazal, only part of the line breaks is dictated by form? There are a lot of reasons a poet chooses to break a line on a specific word, syllable, or punctuation. Let’s start with the easiest one: emphasis.

Every word, sound, punctuation, and bit of spacing are carefully crafted by the poet. Choosing which word ends a line is part of that decision. When you read the end of a line and move down and to the left to begin the next, there is a moment that slips by. It is brief, for certain, but it does exist. In that moment, the last word of the line lives in your memory, right at the front, taking up space. That means that one word is given extra emphasis over the rest of the words in that line. The poet is asking you to linger on that word for just a whisper longer than the rest.

That same moment of the eye tracking from right to left to give emphasis also allows a poet to introduce ambiguity. A word at the end of a line can carry one meaning, and then that meaning can be upended at the start of the next line. To better explain, I’ll look at two stanzas from one of my own poems, “A Question Birthed.”

and neither gender, a question birthed.

Science solved for X and Y

In the first stanza, I end the first line with “both,” having already established the gender binary in previous lines. But then the next line introduces the opposite of “both” with “neither gender.” The power of “both” is instantly undermined, but it lingered in the reader’s mind for a moment. In the second stanza, I end the first line in “Y,” a reference to chromosomes, but also a homonym with “why,” as though science itself was asking a question. As if the entire poem was asking why I was born intersex. Here, I’ve used line breaks for both emphasis and ambiguity.

When crafting a poem, poets are thinking about how a poem flows. This isn’t just the meter and rhyme or the rhythm, but how certain words and syllables and lines can speed up a reader or slow them down. Lines or stanzas are used to build energy and then release it at just the right time. Similarly, poets play with the build-up and release of tension in a poem. Line breaks play a key part in this.

To show this, first I want to look at “Rage” by Mary Oliver from Dream Work. Oliver is a master of pacing in her poems, and “Rage” is no exception.

You are the dark song

you shave, you dress,

you descend the stairs

in your public clothes

Oliver’s lines are short and largely populated by simple and effective language. Her first line break plays with ambiguity with “dark song / of the morning.” Her second line uses a semicolon to slow us down as we read, and the use of “serious and slow” as its own line reinforces the slow, methodical reading of this poem. The lines do lengthen as the poem goes on, giving a sense of momentum, of build, just like the emotion for which this poem is named. Then watch what happens to the flow and tension of the poem in the last few lines: “till no one could gather the fragments — / in your dreams you have sullied and murdered, / and dreams do not lie.”

At the height of its tension, after its longest sentence that ends on the incredibly powerful word “murdered,” comes a tiny and poignant line: “and dreams do not lie.”

For comparison, take a look at Allen Ginsberg’s classic poem, “Howl.” Click that link. Read it over. Better yet, if you have a hard copy, give it a read. At least part of it.

Ginsberg’s lines stretch on beyond the capacity of any single printed page. Each one plows ahead like the seemingly endless linkage of cars in a freight train, and with just as much momentum. Each line break is a transition in topic, but only slightly, each line and phrase connecting to the next. “Howl” asks you to do the impossible: to read it in one sitting, in one screaming breath. Ginsberg’s intentionality with line breaks is a big reason “Howl” is his best-known work.

So next time you’re reading a poem, look at those line breaks. What word ends the line? What punctuation? How does the next line change it? What do you think the poet intended? Ultimately, reflect on yourself and how that line break made you feel. Once you’ve read that poem or heard it, it belongs to you, not just the poet. Let that line break mean whatever it means to you.