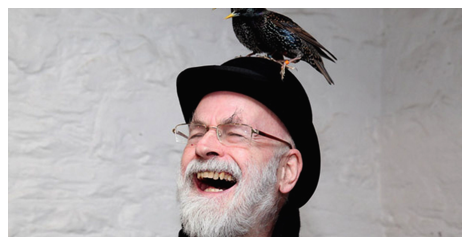 It still seems strange to be talking about Terry Pratchett in the past tense, despite it being two years since he succumbed to the ‘Embuggerance’ – the rare form of early onset Alzheimer’s that silenced this most wonderful storyteller. He was charming and compassionate, but a surface equanimity belied a rage at grand injustice and petty bullying that came to underpin his later work. 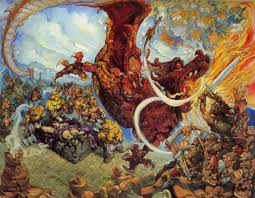 He was such a huge part of my early reading experience. I first encountered his novels on a trip to our local bookshop. I was entranced by Josh Kirby’s cover for Guards! Guards! A chaotic image of flame-breathing dragon and battling guardsmen. It was catnip to my fantasy-obsessed younger self. When I started to read, I do have to admit to being baffled by the drunken ramblings of one Captain Vimes, but I was soon won over. Here was a different sort of hero: flawed, stubborn, sympathetic, and oh so human.

This is one of Pratchett’s many triumphs, as much concerned with the mundane as with the fantastical, he breathes life into his fictional creations. The world exists outside the boundaries of the narrative, the people continue to go about their business, unconcerned as to whether they are being observed or not. (They most likely have more pressing things to be getting on with…)

I’ve now accompanied Vimes on (mis)adventures across eight books – fourteen if you count minor appearances – and he’s become something of a literary friend over the years. I have watched him develop, struggling to keep up with the changes in his own life and the Discworld in general. For though it started as an affectionate parody of fantasy, Pratchett continued to expand and refine his world with each iteration, creating a mirror for our own. In it, assorted peoples of different cultures, backgrounds and species rubbed shoulders amid the bustling streets of Ankh-Morpork, the Discworld’s biggest city and dirty, smelly, beating heart. With each new influx, initial antagonism and conflict is replaced by acknowledgement of what is shared, and acceptance of how we differ.

For me, Vimes embodied this mentality, a character who saw his own prejudices but fought against them, recognizing that as his world changed so should he. (Not completely though, despite currently occupying the exalted position of ‘His Grace, His Excellency, The Duke of Ankh; Commander Sir Samuel Vimes’, he still exhibits a healthy distrust of social hierarchy and inherited authority…)

In our world where grand injustice and petty bullying occupy the same space, we need authors like Terry Pratchett, his pragmatic vision of integration an important perspective. Pratchett showed a deft touch dealing with themes of diversity and integration while never losing the sense of humor or adventure.

I still own that copy of Guards! Guards! Terry was gracious enough to sign it when faced with a rather over-enthusiastic young fan with a stack of books, and it now occupies pride of place in my collection. I still love it. It’s a great book that I keep recommending, jealous of those about to make their first visit to this funny, humane and fantastic literary universe. It is rarely their last.