Expanded universes are truly remarkable things, and I don’t think we’re grateful enough to have them. An expanded universe is, usually, a set of books/comics/games which are “expanding” on the “universe” of a movie, or a television show. Some of them wind up being quite small or obscure. Cult science fiction show Babylon 5, for example, managed a whole nine tie-in novels (of which, one was readable).

Other tie-ins amuse me, like when I recently discovered that there are tie-in novels for one of my favoritest of TV shows, Elementary, with Sherlock and Jane Watson in modern day New York. I love that they’re carefully cordoned off as “TV tie-in novels” instead of just being, you know…additional Sherlock Holmes stories. Anyway, I want to read ’em badly, but more on that in a minute.

Then there are the heavy hitters of tie-ins, like Forgotten Realms (approximately one billion Dungeons & Dragons novels) and Warhammer 40,000 (I have no idea, but there’s another billion). There’s Doctor Who and Star Wars and Star Trek, and probably anything you care to name.

We kind of dismiss these as nothing more than tie-ins, not worth our attention. We assume that they’re just grubbing for money, or they’re for the hardcore nerds out there, and they can be safely dismissed without concern, but I would argue against this, for a handful of reasons.

They Can Improve on the Source Material

I suspect the majority of the people reading this are big fans of Star Wars. I was pretty insane about it as a kid, cooled on it as I aged, and rolled my eyes to the point of migraine at JJ Abrams’ plotting in the newest one. But even before that, we can go back to the prequel films — and the originals, let’s be honest — and admit that the dialogue was clunky  as hell and the plots were kinda muddled up. 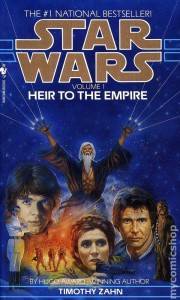 The book that made me start writing. I should enshrine it.

The great thing about the Star Wars tie-in novels was how they could circumvent that. There are early tie-in novels by science fiction powerhouses like Timothy Zahn, A.C. Crispin, to name a couple. Writers with an amazing grasp of big, complex plots, epic in a way befitting the idea of Star Wars, but without sacrificing good character work and smart dialog.

Or an even more precise example: Star Wars Episode III: Revenge of the Sith was the final of the prequels and while it wasn’t the worst, it wasn’t good for a lot behind 500% more lightsaber fights than previous films. The writing was as terrible as ever.

However! The novelization by Matthew Stover was really good. I was so surprised when I read it. It could’ve been stripped of its Star Wars references and been an excellent SF novel all on its own. Smart, flowing writing, good dialogue, and a pretty decent job at taking a seriously wonky plot and finding a way to make it enjoyable. The writing’s lyricism and repeating motifs even helped add some weight to dopey scenes by tying them together in a way the movie failed to do. It was fantastic. I still recommend it.

They Have Unlimited Budget (And No Contracts)

My favorite universe — it’ll fail to surprise you to learn — is Star Trek. I have a Star Trek pin on my jacket, a Trek tattoo I’m planning to get, an encyclopedic knowledge of Trek I try to hide from people or they’ll shun me as a freak. It’s just shameful.

Anyway, a major feature of Trek, across it’s ten movies and five TV series to date (I know, there are Abrams movies, but they don’t relate here) is that they had no damn budgets. Interviews with the crew frequently point out all the places that they were broke. Suddenly you discover that because this episode went on location this season, then that was why this episode never left the ship or had any guest stars.

Also: despite the fact that all of the series and movies were happening in roughly the same time frame in the universe, they were pretty careful not to mix — except on rare occasions. As a kid, I thought it was so cool when Spock appeared on Star Trek: The Next Generation because here were the two shows all mixed up! And Scotty appeared elsewhere! Of course, as an adult, I later realized it was cross-promotion for original crew movies coming out. But still.

There would be the occasional crossovers, as the beginnings of each series, handing off from one show to the next, but that was about it. Otherwise, they kept to their own wheelhouses.

Not so in the books. Aggressively not so. The further you get in the books toward the present day (our present day, not theirs) (well, theirs, too) (whatever), the more all the characters are all muddled together. And the more the locations blur together. The Star Trek 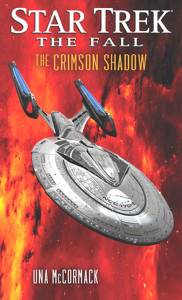 novel I just finished reading involved the Enterprise-E (Next Generation movies) and Cardassia (TNG, Deep Space 9) and Deep Space 9 itself, and characters from both, as well as a host of new characters. This was a smaller-scale, slower book of political intrigue and clever character-work (it was like John Le Carre writing a post-fall-of-USSR novel with a murder mystery in it…which just happened to be set in Star Trek. It was the best Trek book I’ve read to date. Seriously go get it.) but the budget for the book would’ve been way beyond any of the movies, or any of the episodes. Some of the multi-book storylines weave through characters from every series, across dozens of ships and worlds, with huge epic scales that would be impossible in a Trek film. It’s glorious.

There’s A Ton of Them (Available Right Now)

It’s been a bit of a drought of Star Trek material for me, the past handful of years. Yeah there’s the new Abrams’ films, but I’ll be honest, they’ve so far felt like Star Wars films (or Tom Clancy films) dolled up in pointed ears.

When I was a kid, Star Wars was behind me, and we had yet to hear the word “prequels.”

I cooled on Doctor Who, and then Peter Capaldi became the Doctor, the seasons turned me into a hyper fanboy again, and then it was announced there would be a long delay before the next season.

Fortunately, these expanded universe kept me alive. Star Trek, for example, has hundreds of books spanning all series and well beyond. A few are badly written, but fun (like a B-movie, in book form). Some are competently written, with good stories. Quite a lot are genuinely smart, well-written, excellent novels that satisfy my various universal needs. Like I said, I just finished a Trek novel that was an amazing SF novel, or an amazing post-Cold War novel all on its own. Best Trek book I’ve read. I’ve also started a Doctor Who novel (by the same author as the Trek book, incidentally), in which the voices of the Doctor and Clara are captured so pitch-perfectly, I can practically hear the actors arguing.

It’s wonderful. It’s like I’ve got these universes still alive and breathing and moving around me, and that’s what I want, because these places are where I live a lot of the time. I am merely a visitor to your Earth from the Star Trek universe, that’s what I’ve just decided.

Books are a treasure anyway, the best of them deep worlds and populations that you can dive inside of and stay for a long time, scarcely having to come up for air. Expanded universes are something special even beyond that, though: the work of a great number of authors, all of them building this same universe, a universe that you can follow into other mediums should you desire, making it still more real in your imagination.

That’s a unique form of magic, and one that’s pretty specific to books. Go out, find your universe, and immerse in it.