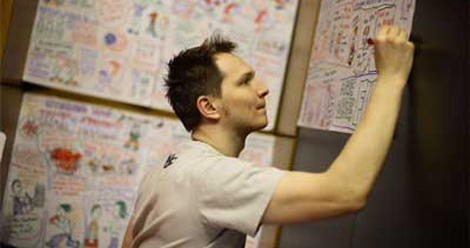 In a cartoon world, a girl octopus struggles to find her place. Lucy vents her school and home frustrations by shredding on her guitar. People think she’s ugly or a waste of space, but if she wears a mask, she can show the world how well she rocks in her favorite band.

Richy K. Chandler has been creating comics professionally for eleven years, and he is the founder of Tempo Lush, a comic press for his own solo works and collaborations. We are happy to have him here on Book Riot. I asked him about his inspiration for Lucy the Octopus. 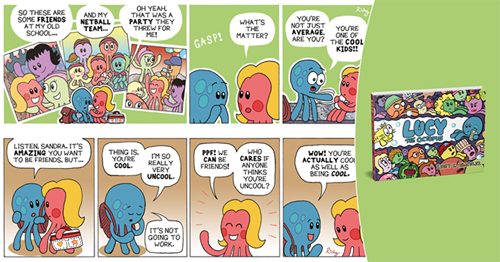 “The starting point was sort of my own experiences of my school days,” he says. “I’m a bit too shy to write something directly autobiographical, so it was a question of taking my personal memories and exaggerating them. For example, my family wasn’t nearly as horrible as Lucy’s is! It’s upping the drama so that the end result is more rewarding. I also tried to make Lucy a more universal figure than just a representation of myself – by doing that, hopefully she is someone that’s relatable to lots of different people.”

We laugh at that. Richy continues.

“During my teen years, I was writing a lot of songs. I didn’t think of it at the time, but it was very therapeutic. When you’re going through a terrible thing, and feel unloved and alone, the act of writing things down is a powerful tool.

“Expressing how you feel is important. Playing music with friends or onstage can do this, and drawing and comic writing have a similar appeal in that you’re getting ideas out of your system. There is also just the simple joy in the act of crafting something. Coloring is my favorite part of doing a comic. For me, it’s a less brain-intensive part of the process, and I can really see why adult coloring books do so well.”

As for creating the comic itself, Richy decided to be practical.

“I wanted to create something that was relatively quick to produce. I was trying to draw one strip a week. It was a self-imposed deadline but I kept the momentum going. I’d use drawing pens, draw in pencil at first, and do the coloring in Photoshop. I would click and fill shapes, which was a speedy process. I did use real-life photos for the rock backgrounds – that wasn’t smart in terms of the efficiency, but I’m proud of the look.

“Now, my favorite process is using a dip pen. I love the physicality of actually drawing on paper. I also like that with a dip pen I can control the line weight by adjusting the pressure. It’s a sort of pen with a nib holder, and I use FW ink.”

I mention using Dr. Ph Martins ink and ask Richy about how Lucy had some art shifts related to dramatic swerves. Bone and Calvin and Hobbes also came up as comics that also shifted art for mood reasons.

“I was very conscious to change the style up,” he says. “I’m in a band at the moment. The experience is brilliant, but when I was performing solo, I was aware that I could play several instruments okay, but none of them brilliantly.  Switching instruments kept the audience’s attention though. In the same way, I liked to vary the art style of Lucy at different points, to keep things feeling fresh for the reader.”

“I’ve only read the first volume of Bone though liked it. Many people that work in a comic strip format will cite Peanuts [by Charles Schulz] and Calvin and Hobbes [by Bill Watterson] as major influences, including myself.

“I’m proud of my drawing, but I’m aware of its limitations. For the times in the strip where we see a different community of creatures deep done in a chasm, I drew just in lead pencil. I was thinking that as I wasn’t creating those strips in colour, it would save time, but it was harder to do the black and white pencil strips than the regular ink and Photoshop ones. That was the nature of Lucy the Octopus. Some strips would take over a week to complete, when others would take just three to four hours.”

Richy has been drawing comics for more than ten years. I asked him what changes he had seen in the industry.

“The twelve years since the conception of Lucy as a character have been interesting,” he said. “I have a publishing imprint called Tempo Lush. Lots of cartoonists self-publish. I created a mini-comic of Lucy eleven years ago, and went on to release one comic strip online every week. “Every time I had forty strips, I would sell them as single issues through my Etsy shop, as well as through conventions, libraries, and schools after teaching comic making workshops. While I was doing that, I was freelancing for Titan Comics – writing scripts for Wallace & Gromit.”

This surprised me. As a Wallace & Gromit fan, I asked Richy about that experience of drawing comics for the franchise.

“I worked on around three hundred of the strips. You get to see the care and detail put into a strip designed for a national newspaper. It’s a very different sort of school. The various creators own styles are sort of invisible. There’s a lot of craft involved but it’s not the same as working on something personal from the heart, like Lucy is to me.”

As for changes to the industry, Richy is more philosophical and inward looking.

“As a creator, I’m very much in my own little bubble really,” he admits. “It would have been nice to see Lucy in a newspaper, but I was going to finish creating it whether a publisher or syndicate picked it up or not.

“I was writing a graphic novel [When Are You Going to Get a Proper Job? ]. When I showed its publisher my other works, there was a lot of interest, especially in Lucy. It’s been published in hardback pretty well as it was.

“Going to comic conventions over the last ten years or so, it’s noticeable that the sheer number of creators seems to get bigger and bigger. It’s a great means of creative expression. You don’t need a big team to make comics, so it’s a very accessible medium. It’s nice selling my work at shows alongside people who are doing really grass roots stuff, photocopying zines.

“The downside is that at conventions, the con visitors’ money is getting stretched. It’s harder to break even doing comic conventions than it was ten years ago. The industry in terms of supporting creators financially isn’t growing, as far as I can tell.

“One thing that I think is changing, which I think is a good step forward, is the diversity of comics characters in terms of race and gender. However while, for example, Marvel’s more diverse characters such as Ms. Marvel, Captain Marvel and Miles Morales selling so well is great, it’s important to remember how low the bar was set to begin with.  It’s a really painfully slow transition in mainstream comics, as in most areas of media and entertainment.”

Due to working full-time on comics, Richy doesn’t read as many Marvel comics as he had in the past.

“Ironically when I went full-time as a comic making professional, with the lack of regular income, I started buying less comics,” he laughs.

His comic features Lucy suffering some rather comedic abuse at her parents’ and bullies’ hands. Yet the tone remains light. I asked Richy about that.

“By making the characters cute little octopuses instead of human, you can sort of fool people a little,” he says. “I often thought about the fact that Lucy could have been created with a different artistic approach.

“The first comic strip in the story is Lucy seeing a fossil and imagining herself as one. It’s an exaggeration of, ‘Aw man, I wish I was dead.’ It’s a dark starting point. The art style deliberately takes the edge off that.
“I want people to empathize with Lucy. Adult readers might be able to look back on their teenage years with a sense of distance, but for a younger person going through similar things, the cartoony nature of the strip helps to show the ridiculousness of characters’ thoughts. It tries to show the bullying as silly and ridiculous.”

Given Richy has written other books, I asked which of his other books would he like readers to peruse after finishing Lucy the Octopus. He recommends When Are You Going to Get a Proper Job?

“It looks at my experience, juggling being a parent with being an artist. There’s fantastical elements in the way the story is told, in particular how the main character, Tariq, has his muse depicted as a fiery creature. That may be a good starting point beyond Lucy. I’ve also made anthologies through Tempo Lush books, and have a comic called Rosie and Jacinda. Zarina Liew did the art for that, as did other famous creators. Rosie and Jacinda shares some similarities to Lucy; it’s about two teenage girls, one of whom, Jacinda, is ostracized. Unlike Lucy however, Jacinda’s response is sarcasm and acting as though the ostracism doesn’t bother her. It’s online at the moment. The other creators and I have been working on it for seven years. I hope to do a third installment soon.”

Before closing the interview, I inquired about his upcoming projects. He’s recently had a meeting with his editor from Jessica Kingsley Publishers.

“In August, I’m going to have had four books out in ten months. My children’s book You Make Your Parents SUPER HAPPY! came out in October, When Are You Going to Get A Proper Job? in November, Lucy in May, and one upcoming book in August is called What the Hell Just Happened?! It’s a picture book for grownups, offering comfort and wisdom.
It’s a lot of essential advice that you may know logically, but need reminding of in times of stress. I hope this book offers comfort for anyone getting through a rough time.”

I thank Richy for this time and advice on cartooning, since he has ample. Lucy the Octopus is out in stores now; be sure to pick up a copy, and enjoy!

Lucy the Octopus is a funny graphic novel starring an unpopular (but kind and talented) teenage octopus named Lucy, and her adorable (if poisonous) pet puffer fish. It celebrates the rewards of being yourself, calls out the uncoolness of bullying, and playfully warns of the perils of social climbing (£12.99, Jessica Kingsley Publishers)