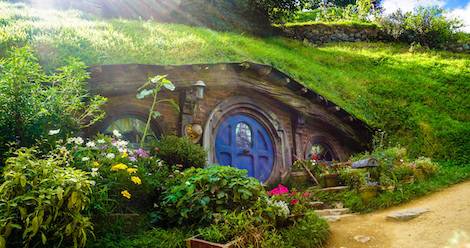 Maybe you’ve heard of an author named J.R.R. Tolkien. Perhaps you’ve read or watched The Hobbit or The Lord of the Rings. Those fantastic fantasy worlds come from a writer who led an intriguing life. Tolkien’s life and work are on display (until May 12, 2019) at The Morgan Library & Museum.

Because Tolkien’s work is also copyrighted, the vivid watercolors, the intricate pencil drawings, and the copiously-planned maps cannot be reprinted here. However, I can share some tidbits I learned along the way. Because I’m not a Tolkien expert, some of this might already be old news. However, if you’re an admirer from afar like me, this might all be new news to you.

The exhibit includes autograph letters. These are handwritten to and from Tolkien. The handwriting is so fancy. It’s got loops and serifs and loopy serifs. This handwriting in modern English looks much like Old English language from afar. Because Tolkien was so inspired by Old Norse mythology, maybe the slant of Old English influenced his everyday handwriting. Whatever the case, it’s artwork in and of itself.

Trench fever may not sound as awful as what it actually is. It’s a disease that occurs from body lice. It was a common infection among troops in World War I. Because Tolkien contracted trench fever in 1916, he didn’t see battle when he was serving in the war.

Is It A Symbol or A Signature?

J.R.R. Tolkien is an interesting name. It lends itself to what I originally saw as a neat little symbol at the bottom of his watercolors. Then I realized, Oh, that’s an R. Then another R. And, oh, yes, a J and a T. He came up with a way to interlace all four initials into one intricate symbol. Kind of like Prince’s symbol but based on his name and not to rebel against a record label.

Some poetry is made by drawing on newspapers, magazines, or other printed matter to invent a new poem.  Tolkien used newspapers for doodling in much the same way. What is labeled as a doodle is a masterful piece of elaborate artwork.

On July 7, 1969, Joni Mitchell performed “I Think I Understand” for the Mississippi River Festival. She wrote the song inspired by Galadriel, the Lady of Lothlórien, who appears in The Lord of the Rings, The Silmarillion, and Unfinished Tales. The song uses the lyrics, “Fear is like a wilderland,” which refers to Tolkien’s fictional world.

My favorite part of the exhibit—aside from the wall-sized murals of Tolkien’s drawings and the keyhole-shaped doorway at the entrance—were the Christmas letters. Tolkien wrote letters to his children during Christmas time from Father Christmas. They have a much more childlike quality than LOTR. The drawings of Father Christmas are just as fun.

If you plan to visit, the Morgan understands fandom and balances it with safety. While you are free to wear a costume, you need to make sure that costume has shoes that you keep on at all times. Also, the costume cannot include masks, wizard staffs, scepters, axes, swords, or bows and arrows. Otherwise, costume away!

And if you can’t get to the exhibit, Tolkien: Maker of Middle-earth is available as a book for you to own and gaze at when you simply can’t get enough.

What did I miss? Tolkien fans, teach me everything! Feel free to leave a comment. If you’re looking for more JRRT, check out this news about Tokien’s biopic and this item about Amazon’s prequel plans.