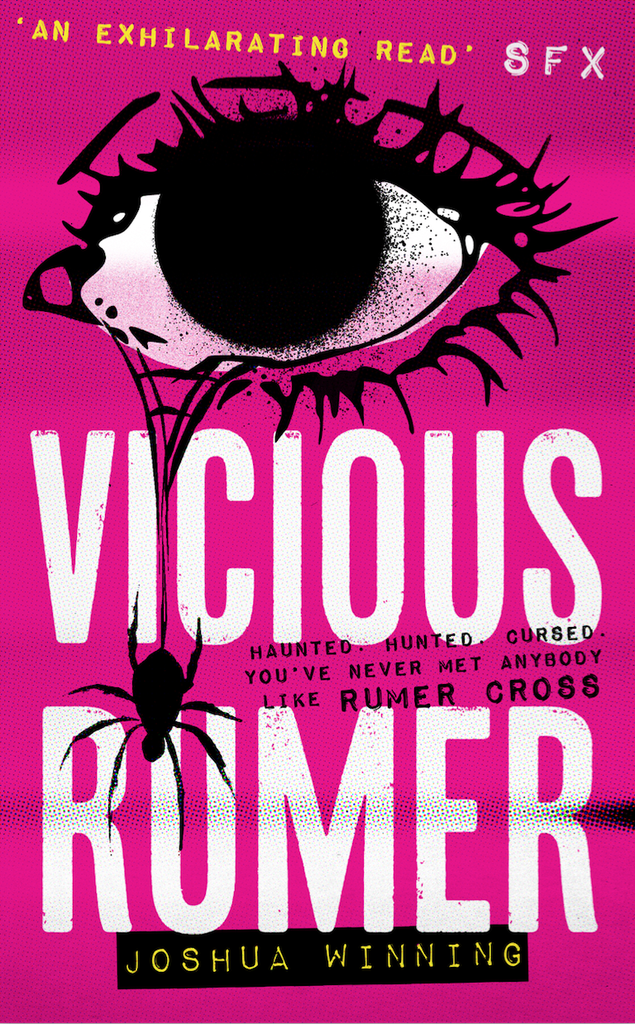 Joshua Winning is the debut author of Vicious Rumer, a gritty YA thriller with a powerful heroine at its core. Rumer Cross scrapes by in a burned-out London working for a failing detective agency. She’s desperate to escape her mother’s criminal legacy. Nicknamed the “Witch Assassin”, her mother terrorized London for over ten years before being brought down. 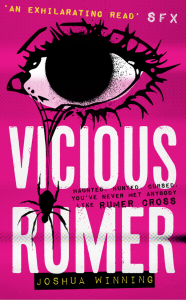 On her own, Rumer bounces from one foster home to another, becoming more and more isolated and cynical as the years pass.

Then, in what Rumer believes is a case of mistaken identity, she becomes the target of a terrifying mobster who thinks she’s stolen a priceless occult relic.

Now Rumer must confront the past she’s trying to hide if she’s going to live to see another day.

In Vicious Rumer, Joshua Winning introduces a truly bad-ass heroine to the world of YA.

I had the pleasure of sitting down with Joshua Winning for a few questions:

Lucas Maxwell: I’m lucky to get to speak to a lot of authors and many of them say that characters often come into the room when they are writing or appear out of nowhere – is this the case for Rumer Cross? Did you have a concrete idea for her in your mind or did she evolve as you wrote?

Category ID: 15789
Category ID: 468
What’s Up in YA? Newsletter
Sign up for What's Up In YA? to receive all things young adult literature.
Thank you for signing up! Keep an eye on your inbox.
By signing up you agree to our terms of use

Joshua Winning: Rumer came to me in pieces, like a nightmare version of a Build-A-Bear. I had a pretty good idea early on of what she looked like (black-haired and haunted) and how she acted (sarcastic and sharp), but I wasn’t 100 per cent sure of the sequence of events that led to us first meeting her wielding a hammer in a basement. It was fun discovering that as I wrote.

LM: Vicious Rumer is set in a very bleak version of London, what are your favourite books set in this city and did it influence you at all?

JW: Neil Gaiman’s Neverwhere paints a really vivid picture of contemporary London, and I loved how he turned the city and its people into living metaphors – the idea that you literally become invisible when you’re homeless is heartbreaking. That’s something Rumer uses to her advantage – it’s so easy to be anonymous in a big city. Perfect for a shadow! On the flipside, I love Virginia Woolf’s depiction of high-society city life in Mrs Dalloway. But the biggest influences on my depiction of London in Vicious Rumer were my own experiences of living in the city – we’ve all felt like Rumer, both revelling in anonymity while raging at the uber-crowds. It’s a great city, but also a great city to be angry in!

LM: When I was a kid I was obsessed with horror films and I watched many at too young an age. Poltergeist, The Exorcist and The Thing stand out as films that warped my brain, what were the horror films and novels that affected you the most at a young age?

JW: Those are the films I loved as a kid, too! Poltergeist was a biggie, and The Howling, A Nightmare On Elm Street, Alien… They all fed my love of things that go bump in the night. Post-modern stuff like Scream was huge when I was a teenager, so I also devoured everything like that, from Urban Legend to the later Halloween sequels. I was a big slasher fan, and I loved Point Horror books – I eventually combined both in my novel Camp Carnage, which is set in an ’80s summer camp for gay teenagers. (It’s free on Amazon, btw.)

LM: What’s the first book that made you cry? Like, weep into the pages cry.

JW: The Final Reckoning by Robin Jarvis. It’s the final part in The Deptford Mice Trilogy, which is all about the mice and rats of London. There’s a character death towards the end that is devastating. It still haunts me. That’s why Robin Jarvis is one of my absolute favourite authors – he’s unafraid of taking risks and going for tragedy HARD.

LM: You mentioned that you grew up in a tiny town which I can relate to. How did growing up in this environment spur your creative side or do you feel it hindered it at all?

JW: Gosh, I’ve never really thought about that! I always had an overactive imagination as a kid – if I wasn’t reading, or writing my own stories, I was in the garden with my sister making up fantasy quests and stories about witches. I remember loving my local library, especially during the summer holidays when they set a reading challenge. You had to read as many books as you could in six weeks, which wasn’t much of a challenge as that’s exactly what I loved doing!

LM: I could be very wrong about this (and therefore a horrible librarian) but I don’t see a lot of horror aimed at older teens. Do you agree with this statement? What YA horror should I be filling the Library with?

JW: I was so lucky to have Point Horror when I was younger, but you’re right, I’m not sure that horror for older teens is particularly ‘in’ at the moment. Do you have any Christopher Pike in your library? That’s who I moved onto after Point Horror and his stuff was brilliant – dark and disturbing and fast-paced, often with a killer hook. It’s funny and sad, though, that Christopher Pike is still the first name people bring up when we talk about older YA horror – it just shows how underrepresented the genre is. Here’s a curveball: I’m reading Final Girls by Riley Sager at the moment, and although it’s technically adult fiction with the odd saucy moment, I can imagine loving it as an older teenager; it’s definitely worth checking out if you’re 16+.

LM: We have a dedicated group of seven students in Year 8 who are writing a dystopian thriller collaboratively in the Library every day during their lunch hour. What advice would you give them to ensure they follow through with this project?

JW: How exciting! I love a good dystopian thriller. How is the project going? My main advice would be: keep at it no matter what. Writing is like feeding fish; the key is little and often. The thought of spending your lunch hour writing may make you want to tear your hair out, so agree to do just 20 minutes instead, or even 10. Once you get into it, you’ll probably write for longer than that anyway – and if not, you’ve still accomplished something. Good luck!

LM: I went through a stage at university when I was a little obsessed with Aleister Crowley and what he was trying to get across. Were you required to conduct any research into the occult when you wrote Vicious Rumer? Is it something that you are interested in personally?

JW: I’m afraid I did very little research into the occult for Vicious Rumer, aside from looking into famous cursed objects. I generally like to make up my own stuff when it comes to the weird and wonderful and, although the occult plays a part in Vicious Rumer, it’s only a tiny part of the story. The book is more about obsession than the occult. That said, working in magazines definitely helped me write the fake article that Rumer finds about the cult her mother once belonged to.

LM: How did you ensure you kept your voice during the editing process? Did you feel like you had to defend your characters or was it an easier process than you anticipated?

JW: Editing was a dream! Both of my editors at Unbound – Craig and Andrew – were fantastic, and luckily fell in love with Rumer as much as I had. All of their suggestions were about honing what I already had, and making sure the ambiguous elements weren’t just flat-out confusing. They really helped me find the balance between the many genres the book dabbles in – there were times it blurred the lines between reality and the supernatural a little too much, which didn’t necessarily serve the story. I was definitely able to retain Rumer’s voice throughout editing, though, and even managed to craft it to make it even better.

Finally, and I ask this of ever author I interview: You’ve been sucked into television land for some reason and forced to live with a TV family for the rest of your days. Which family would you choose and why?

JW: Well, obviously, the Halliwells from Charmed, but only if Grams is around. Charmed is one of my big teen obsessions that has continued into adulthood. When it was good, it was SO GOOD. I loved them as a dysfunctional family who, by fighting monsters, also figured out their own issues. And of course Grams was the coolest – I just can’t resist a matriarch with kick-ass magical powers. I think we’d get along famously between all the demon attacks.