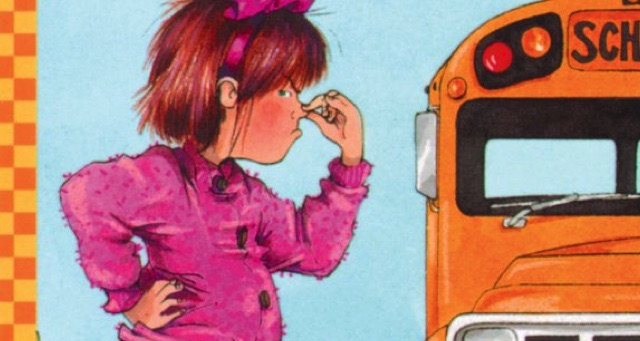 Junie B. Jones is a chapter book series by Barbara Park about a kindergartener who is quick with a wisecrack, uses bad language, and has a propensity for trouble. The first book, Junie B. Jones and the Stupid Smelly Bus was published in 1992. I was six when it was released, but it took a few years for the popularity of Barbara Park’s heroine to reach my very book- strict (Captain Underpants; Are You There God, It’s Me, Margaret; and Harry Potter were all banned) Catholic school, so I didn’t actually read the books until I was older. 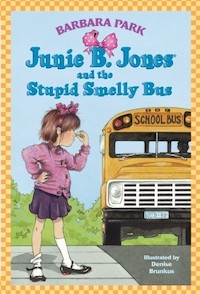 Junie B. Jones is a Millennial, and if the math is right—she was six in 1992, and I was also six in 1992—Junie B. and I are the same age. But while Junie B. was learning to fix toilets and spying on teachers and hiding under her principal’s desk, I was wearing a uniform and praying with a rosary and learning to be a “good Catholic.” Junie B. seemed extraordinary to me; she could yell and talk back and fight without facing serious consequences. Her behavior, her attitude, felt authentic and funny. Junie B. was a tough cookie. She was (is) my idol. 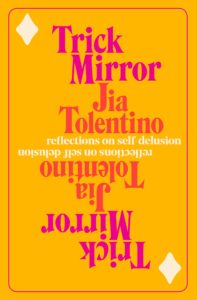 In Jia Tolentino’s marvelous new book Trick Mirror: Reflections on Self- Delusion she writes that “If you were a girl, and you were imagining your life through literature, you would go from innocence in childhood to sadness in adolescence to bitterness in adulthood—at which point, if you hadn’t killed yourself already, you would simply disappear.” But imagining myself through the life of Junie B. didn’t feel too innocent or too doomed. Junie B. wasn’t remarkable. She wasn’t very smart or witty or cute, and her ordinariness and her penchant for trouble excluded (or shielded) her from the category of exceptionalism that women and girls in literature (and life) are so often expected to epitomize. Like Elizabeth Bennet says when faced with the virtues of an “accomplished woman”: “I never saw such a woman. I never saw such capacity, and taste, and application, and elegance, as you describe, united.”

Women can be loud and messy and dumb and rude and thoughtless. Just like men. A woman’s value should not be determined by extraordinary abilities and accomplishments. She should not have to work harder and drive herself into obscurity to fulfill the needs of a world that believes her worthiness and value is tied to the “cultural excellence” (Elena Ferrante, Vanity Fair) of men.

Adults often bemoan the exploits of Junie B. Jones, who has a proclivity for violence and rude language. They think she is too offensive for their children. They denounce Junie B.’s use of the words “dumb” and “stupid.” They gripe about her sassiness and disrespectful behavior towards adults. If you read the one- and two-star reviews on Amazon, the litany of adult voices rise in a chorus of indignation: she’s too immature and she pronounces words incorrectly! She’s a brat! She headbutts other kids! And backtalks adults! She’s thoughtless, disrespectful, and negative! She’s offensive and her sense of humor isn’t funny! She’s inappropriate and vulgar! 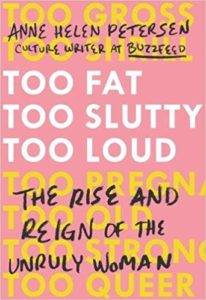 Anne Helen Petersen described the expectation of what a modern woman should be in her 2017 book Too Fat, Too Slutty, Too Loud: The Rise and Reign of Unruly Women: “She should be assertive but not bossy, feminine but not prissy, experienced but not condescending, fashionable but not superficial, forceful but not shrill. Put simply: she should be masculine, but not too masculine; feminine, but not too feminine. She should be everything, which means she should be nothing.” Likewise, Miss Bingley (Pride and Prejudice) describes an accomplished woman as: “A woman must have a thorough knowledge of music, singing, drawing, dancing, all the modern languages, to deserve the word; and besides all this, she must possess a certain something in her air and manner of walking, the tone of her voice, her address and expressions, or the word would be but half deserved.”

At six, Junie B. wears what she wants, says what she wants, and does what she wants. She thinks she’s precious, and it doesn’t matter if anyone else agrees with her. What she “should be” has no bearing on her actions. She is all reaction and vexation. Right and wrong are determinant on how she feels and what she wants. She expresses herself loudly, rudely, and with authority; while mispronouncing words and screaming her displeasure at the top of her lungs (in the book these explosions are captured in all caps). She does not wait her turn to speak or offer apologies. When meeting her kindergarten teacher before school, she wears a hat with devil horns and agrees when her teacher tells her she looks cute.

Barbara Park captured, with authenticity and heart, the voice of a six-year-old child. Junie B. is a spunky little girl who is naive, lacks an attention span, has a vivid imagination, quick temper, a strong sense of injustice, and an inability to understand subtlety or nuance. When her baby brother is born, and her Grandma Miller refers to him as a “cute little monkey,” Junie B. takes this literally and tells all the kids at school that her new baby brother is an actual monkey. Her friends Lucille and Grace both vie for the chance to see new baby monkey Jones first, and start giving Junie B. presents to win her favor; and of course, like any six-year-old, Junie B. ups the ante, asking her friends for more and more until Grace literally gives Junie B. the shoes off her feet. Junie B. feels no objections about her friend’s shoelessness. She has determined that it’s a fair price for seeing her new monkey brother, and gladly accepts Grace’s offering. Quickly, Mrs. (Junie B.’s kindergarten teacher) notices Grace’s missing footwear and Junie B. is sent to the principal’s office.

Junie B. is often sent to the principal’s office. And rightly so. Little kids have to learn that it’s not right to take the shoes off someone’s feet, even if that someone is trying to buy into your good graces. They should learn that headbutting classmates—even if those classmates are loudmouth jerks (meanie Jim)—is not an appropriate way to deal with difficult people. Junie B. is unruly and undisciplined and full of indignation. She possesses the unconstrained confidence of a child, and not a girl child or a boy child, but a child. The gender bias and behaviors of adults have not yet caught on. Junie B. has not learned to temper her emotions, to lower the volume of her voice, or that boys—by nature—are: bigger, better, stronger. And to their credit (or, to Barbara Park’s credit), the adults in her life do not belittle or degrade Junie B. for her “unladylike” antics. She is not told that “little girls aren’t supposed to do that” or “you should know better, because you’re a girl.”

In fact, the series doesn’t seem to bother itself with qualifying Junie B. by any gender norms: on career day she decides that she will be a janitor; instead of going to Meanie Jim’s birthday, she decides she’d rather help Grampa Miller fix the toilet; she dresses in frilly dresses, but pulls her skirts over her head, and then assures everyone that it’s okay because she’s wearing shorts under her skirt; and she wears devil horns to her kindergarten orientation.

Before Harry Potter, boys and girls of my generation were growing up with Junie B. Jones, and she was exclaiming (always exclaiming) things like:

“How’d you like a knuckle sandwich, you big fat Jim?”

“I do act like a little lady, you dumb bunny Lucille! And don’t say that again, or I’ll knock you on your can.”

“HELP! HELP! I’M IN BIG TROUBLE!” I yelled to Mother. “‘CAUSE I ACCIDENTLY SHOT OFF MY BIG FAT MOUTH ON THE BUS!”

“We have to talk right now. ‘Cause I’ve already waited all I can. And I’m getting tension in me.”

Junie B. Jones might be an example of a different kind of heroine. Her future seems a bit brighter, a bit more hopeful, than her female literary predecessors. She doesn’t seem doomed to follow Toletino’s trajectory of hope, sadness, and then obscurity. And through Junie B. (and other heroines like her), young girls, imagining themselves through literature, might conceive a different kind of path through life; a path free from the pressures of performance and the pursuit of what Elena Ferrante refers to as the perceived “cultural excellence” of men.

As we all try to find complicated definitions of what it means to be a feminist—or just, how a woman should exist within the framework of a world that has been made by men—I think it might be helpful to simplify our search terms. If you’ve read Jia Tolentino or Roxane Gay or Anne Helen Petersen or Rebecca Traister or Rebecca Solnit, it is obvious there is no one way to be a woman in this world, but by simplifying our definition, maybe we can find ubiquitous terms in which we can all agree. Maybe we should all read more Junie B. Jones, Harriet the Spy, or Julie of the Wolves and learn to live in the world as the “people we are” (Tolentino). It might also be helpful to take a few pointers from Turtle Wexler (The Westing Game) and kick people in the shins when they annoy us or ball up our fists (like Junie B.) and threaten a knuckle sandwich to anyone who belittles us. Maybe we should own our instincts and desires instead of mollifying the world that tells us we’re wrong, or that we don’t have value.

To the parents that don’t allow their children to read Junie B. Jones, or the parents that use Junie B. as a learning tool to discourage bad behavior and poor grammar, I’ll let Barbara Park have the last word: “People act as if I’m teaching children how to blow up cats. The worst thing she does is maybe call someone stupid, but that’s just her being a 5-year-old. You’d hear worse than that walking across any playground!”

Need more? Book Riot also has the Best 10 Quotes from Junie B. Jones and the Stupid Smelly Bus