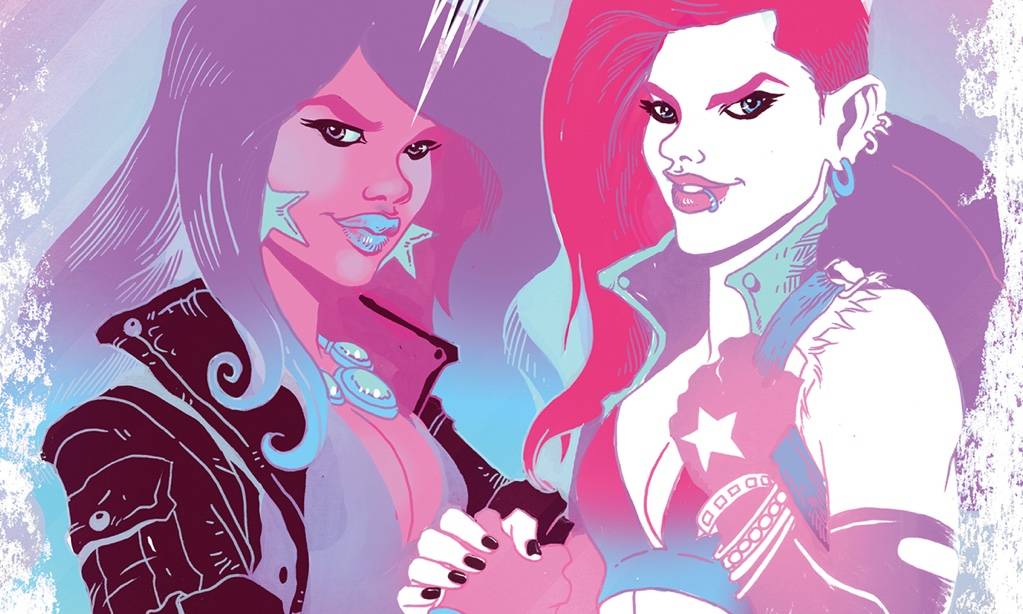 The state of being transgender in comics these days is about as not great as it’s always been. Despite the overwhelming push for more diversity in stories, characters, and creators at major publishers, the cry for more transgender (and, by extension, pretty much any kind of queer character who isn’t just gay) characters tends to get drowned out by the noise. It’s not something I can really blame on the industry, thought. While publishers like Marvel and DC are still trying to figure out how to tell stories about characters who aren’t white and/or are women, it might take a while before they realise they can tell stories about transgender people too.

It’s a frustrating realisation to have, the idea that characters that have experiences similar to yours and that you can connect with are sitting there on a to-do list of diversity. The problem is that comics have been dominated by the idea that the default hero is a beefy, straight, white, cis male in spandex while every woman is supermodel-gorgeous with heaving breasts, an impossibly skinny waist and child-bearing hips. This mindset has poisoned comics for so long that we’re still at a point with major superhero publishers where “Why is Marvel only just hiring a black woman writer for the first time in 75 years?” is a genuine question.

These things take baby steps at the top end, but, thankfully, the independent comics scene has always been further ahead of the curve thanks to not having to cater to the established fanbase that has a tendency to react negatively if they realise their comics are being diversified. Black Mask Studios is a publisher who has genuinely been pushing the boundaries of what comics can be and who they can be for. While their output is strictly adults-only, their focus on genuine diversification of creators and characters has lead to comics like BLACK, Young Terrorists, and the comic I’m going to be focusing on here, Kim & Kim.

Kim & Kim is a comic written by Magdalene Visaggio, illustrated by Eva Cabrera and coloured by Claudia Aguirre. It’s about a pair of bounty hunters in space living from paycheck to paycheck and trying to deal with the crushing reality that they’re poor as shit without a break in sight. It’s first issue is a blast of a comic that’s funny and action packed. It’s also, as described by the solicit text, “queer as shit.” What put Kim & Kim on my own radar was the fact that Magdalene Visaggio is a trans woman and I have never seen a comic of this size in the industry with a trans woman as one of the creators. In fact, all of the creators are woman including the editor, Katy Rex.

That was an important moment for me as a trans femme and a fledging writer of and about comics. We can make it. Trans people don’t have to be stuck in our own corner of the industry, making only webcomics and zines that we pass amongst ourselves. We do no have to be a subculture within comics; we can be a part of the culture of comics. What made it even better was the fact that both Kims of the book’s title are queer. Kim Quattro is transgender and Kim Dantzler is bisexual. Being both of those things myself, I remember wanting to cry when I heard about that. Never have I seen a comic book hit the mainstream press with a trans woman and a bisexual woman as the lead characters. This pushed Kim & Kim from an important book in my eyes to something genuinely industry-changing.

Transgender characters barely exist at Marvel and DC. I want you, the person reading this article, to think of every trans character you can from the pages of Marvel and DC’s comics. How many are shapeshifters? How many are aliens? How many are mutants? How many of them have their gender identity presented as an on-off switch that allows them to exist within any body they choose? The answer is probably most of them.

From Mystique to Xavin to Tong to Miki from Swamp Thing to Sera from Angela: Asgard’s Assassin, the majority of trans characters exist in a form that allows them to be their perfect self with little to no effort. To this day, has there ever been a mainstream comic that has shown a character go through hormone replacement therapy or facial hair removal or facial feminisation surgery or breast augmentation surgery or sexual reconstruction surgery or any of the myriad of ways our bodies must be sliced open and rearranged from the inside out so as not to feel wholly other to ourselves? Not to my knowledge.

Now, Kim & Kim isn’t a comic that shows that kind of thing either, but the simple fact that it is a comic with a trans woman as a lead character that is written by a trans woman makes Kim Quattro’s narrative all the more authentic. Kim’s gender identity is never an active plot point, it is not something that defines her within the first issue of the series.

It is information that isn’t only given to the reader past the halfway point of the issue as part of a simple, down-to-Earth conversation between friends. It is not given as some sort of revelation like the outing of so many queer characters from Alysia Yeoh to Bobby Drake has been framed. It is simply a part of who she is that comes up in conversation once in the issue. And while that might not seem much, it is everything to me.

For decades, the narrative of trans people, or pretty much any character who isn’t straight, white or cis, in comics has been dictated by cisgender white men. This is the problem when it comics to talking about representation and diversity. They are seen as the default comic book writer, taking up huge percentages of the industry and for years any story must go through them. No amount of diversity in the characters of the story can overcome a writing staff that is made up primarily of the same old guard that has taken up the comics industry for years.

We’re still seeing the remnants of that where Marvel’s recently revealed RiRi Williams, a black, 16 year old girl as Iron Man, is being written by white man Brian Michael Bendis. Sam Wilson’s tenure as Captain America has been under the pen of two white writers, Rick Remender and Nick Spencer. Batwoman, a lesbian, has only ever had her ongoing series written by men. Marc Andreyko was a gay man, sure, but a gay does not have the same life experience as a lesbian.

These writers dictate the narratives of these characters, but they cannot write from the experience of being black or being queer or being transgender or being anything other than who they are. They are writing solely from empathy and research. In a perfect world, any writer would be able to write any character, but that’s not our world. In our world, the number of creators in mainstream comics (and I’m including ever major publisher from Marvel and DC to Dark Horse, BOOM! and Image) who aren’t white, who aren’t straight, who aren’t cis and who aren’t male is minuscule compared to those who are.

For so long, minority characters in comics have had their narratives dictated by the people who do not share their experiences. In 2016, isn’t it about time to allow the people who have experience those lives to dictate the characters that represent them in the media?