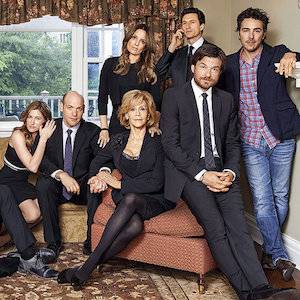 I ended up really liking this trailer, for the film adaptation of This is Where I Leave You! Mostly because I like all the actors! But also because the trailer left me with an unfamiliar warm and fuzzy feelings (unfamiliar because I am a straight-up grouch and my heart is made out of stone wrapped in barbed wire). So I definitely liked this trailer. Who knows, I may end up liking this movie better than the book BLASPHEMY SCANDAL MORE BLASPHEMY.

:10- Do people walk in on their spouses cheating on them in their own bedrooms (carrying a lit birthday cake for said spouse no less?) This feels like one of those things that just happens in movies, like meeting your soulmate by walking around the corner and smacking straight into your soulmate and having the stack of papers they were inexplicably carrying go flying everywhere.

:15- Jason Bateman, you are my dude and all but TINA FEY just popped up on screen and it looks like she’s going to be playing a dramatic role but still have funny lines sorry Jason Bateman, I’m going to have trouble focusing on what your saying for the rest of the trailer, or at least all the parts where Fey is also in the shot.

:30- Okay, now we have our main players, Jason Bateman, Tina Fey, Jane Fonda who to this day inspires me to work for my buns of steel, Poor, Poor, Poor Peter Russo from House of Cards and Adam the Everyone’s Most Embarrassing Ex-Boyfriend from Girls. This casting director should have a day named after her plus a parade and ice cream social to follow.

:40- Jane Fonda tells everyone “they are grounded” for the next seven days instead of “we are going to sit shiva” which is a Jewish tradition where you stay in the house for the week following the funeral to honor your dead loved one. Shiva is like a really important thing in the book, are they still doing shiva in the movie, did they just not want to say shiva in the trailer, are they trying to pretend like this SUPER Jewish story isn’t really all that Jewish, are they even Jewish in the movie, is this the real life equivalent of Home For Purim becoming Home For Thanksgiving?

1:10- Rose Byrne plays Jason Bateman’s hometown love interest (is there only going to be one love interest in this movie? I hope so, in the book there were like, twenty, and girls throwing themselves at the protagonist started to chew on my nerves hard) and I’m happy because I’m ALWAYS happy to see Byrne on screen. This casting director really deserves the Olympic Gold for casting, all tens, even from the Russian judges!

2:30- Whatever, I can give this movie guff until I’m blue in the face, I’m still super excited to see this. This is a good reminder that in Hollywood casting is EVERYTHING. Well, that and money.

What did you guys think of the trailer? Spill, spill.