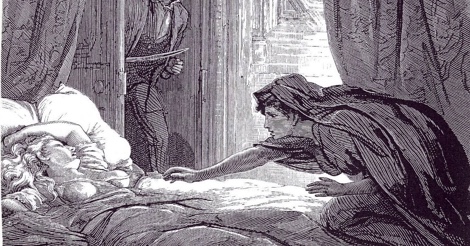 Sponsored by Carmilla by Kim Turrisi from KCP Loft. 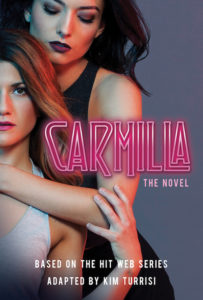 An adaptation of Shaftesbury’s award-winning, groundbreaking queer vampire web series of the same name, Carmilla mixes the camp of Buffy the Vampire Slayer, the snark of Veronica Mars, and the mysterious atmosphere of Welcome to Nightvale.

In 1872, J. Sheridan Le Fanu wrote a novella. It’s about a vampire who slowly sucks the life out of the young girls it charms in the daytime hours, only to be hunted down in by a male protector and killed in its coffin.

This vampire is a woman.

“I took her hand as I spoke. I was a little shy, as lonely people are, but the situation made me eloquent, and even bold. She pressed my hand, she laid hers upon it, and her eyes glowed, as, looking hastily into mine, she smiled again, and blushed.”

The narrator is Laura, a lonely teenage girl living in Austria. A carriage accident near her home brings Carmilla, a mysterious girl who immediately becomes extremely close with Laura. If you’re used to reading Victorian literature, the sexual-laden prose of their interactions will be shocking. “What!” you will cry. “I thought Victorian literature women only brought baskets laden with things to the poor or else died in the streets due to having had sinful sex.”

Well Le Fanu has some things to tell you. Mostly in the form of heavy breathing:

“Sometimes after an hour of apathy, my strange and beautiful companion would take my hand and hold it with a fond pressure, renewed again and again; blushing softly, gazing in my face with languid and burning eyes, and breathing so fast that her dress rose and fell with the tumultuous respiration. It was like the ardor of a lover; it embarrassed me; it was hateful and yet over-powering; and with gloating eyes she drew me to her, and her hot lips traveled along my cheek in kisses; and she would whisper, almost in sobs, “You are mine, you shall be mine, you and I are one for ever.” Then she had thrown herself back in her chair, with her small hands over her eyes, leaving me trembling.”

While this heaving bosom talk may bring to mind classic associations with the male gaze, especially as regards women’s sexuality as it relates to other women, Carmilla is not that easily dismissed. While its titular character is still hunted down in the end, the reader feels an intense sympathy for her, despite talk of her being a monster. Reading between the lines of Laura’s narrative is almost unnecessary. You can feel the weight of the paternalistic 19th century on her as she talks about feeling “embarrassed” and “even frightened” when Carmilla professes her love. Laura has been asked to write this story by a doctor. That doctor’s essay on her story will be published and read, presumably by men. That she is as honest as she is in her recounting of what Carmilla makes her feel is astounding.

Almost no less astounding is Le Fanu’s reliance on two main female characters to drive his story. On looking to its far more popular descendant, Dracula, we see Jonathan Harker locking horns with Count Dracula over Mina Murray (Lucy Westenra is also there). In Carmilla, the men are sidelined but manage to remain condescending:

“The morning after I saw this apparition I was in a state of terror, and could not bear to be left alone, daylight though it was, for a moment.

“I remember my father coming up and standing at the bedside, and talking cheerfully, and asking the nurse a number of questions, and laughing very heartily at one of the answers; and patting me on the shoulder, and kissing me, and telling me not to be frightened, that it was nothing but a dream and could not hurt me.”

That Bram Stoker took elements of Carmilla, a woman-centered story about female sexuality, and used them for his own story is beyond doubt. That anyone who is reading Dracula should also read Carmilla is beyond doubt. In a time in our world when we need stories where the disempowered control the narrative, Carmilla is a balm to classic fiction where the women are frequently flat pieces of cardboard pasted into a scene, and exist to change anyone but themselves.