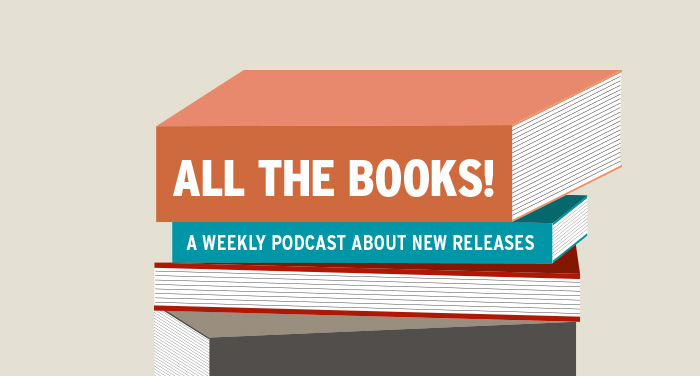 This week, Liberty and Patricia discuss The Return, The Empress of Salt and Fortune, The Glass Hotel, and more great books.

This episode was sponsored by TBR: Tailored Book Recommendations; Libro.fm; and Orbit Books, publisher of N.K. Jemisin’s new novel The City We Became.

The Return by Rachel Harrison

The Upside of Being Down: How Mental Health Struggles Led to My Greatest Successes in Work and Life by Jen Gotch

The Only Black Girls in Town by Brandy Colbert

A Wish in the Dark by Christina Soontornvat

The Glass Hotel: A novel by Emily St. John Mandel

Bring Yourself: How to Harness the Power of Connection to Negotiate Fearlessly by Mori Taheripour

Save Yourself by Cameron Esposito

The Empress of Salt and Fortune by Nghi Vo

Night of the Mannequins by Stephen Graham Jones

All Heathens by Marianne Chan

The Fortress by S.A. Jones

For Love and Country: A Novel by Candace Waters

The City We Became by N. K. Jemisin

A Wonderful Life: Insights on Finding a Meaningful Existence by Frank Martela PhD

Everyday Activist: A Guided Journal for Engaging Your Community, Finding Your Voice, and Changing the World by Jessica Jollie, Camila Rosa

More: A History of the World Economy from the Iron Age to the Information Age by Philip Coggan

No One Left to Fight by Aubrey Sitterson, Fico Ossio (Illustrator)

Unworthy Republic: The Dispossession of Native Americans and the Road to Indian Territory by Claudio Saunt

The System: Who Rigged It, How We Fix It by Robert B. Reich

The Precipice: Existential Risk and the Future of Humanity by Toby Ord

Island Stories: An Unconventional History of Britain by David Reynolds

Marguerite: A Novel by Marina Kemp

We Were Promised Spotlights by Lindsay Sproul

Stealing Home: Los Angeles, the Dodgers, and the Lives Caught in Between by Eric Nusbaum

If I Never Met You: A Novel by Mhairi McFarlane

The Last Human: A Novel by Zack Jordan

Tigers, Not Daughters by Samantha Mabry

The Office: The Untold Story of the Greatest Sitcom of the 2000s: An Oral History by Andy Greene

The Herd: A Novel by Andrea Bartz

The Edge of Anything by Nora Shalaway Carpenter

Kenzie Kickstarts a Team (The Derby Daredevils) by Kit Rosewater

Lady in Waiting: My Extraordinary Life in the Shadow of the Crown by Anne Glenconner

Then the Fish Swallowed Him: A Novel by Amir Ahmadi Arian

Before Anyone Else by Leslie Hooton

How I Broke Up with My Colon: Fascinating, Bizarre, and True Health Stories by Nick Seluk, The Awkward Yeti

This Is Chance!: The Shaking of an All-American City, A Voice That Held It Together by Jon Mooallem

The Other Madisons: The Lost History of a President’s Black Family by Bettye Kearse

We Inherit What the Fires Left: Poems by William Evans

Lakewood: A Novel by Megan Giddings

My Sister: How One Sibling’s Transition Changed Us Both by Selenis Leyva and Marizol Leyva

The Faceless Old Woman Who Secretly Lives in Your Home: A Welcome to Night Vale Novel by Joseph Fink, Jeffrey Cranor

American Rebels: How the Hancock, Adams, and Quincy Families Fanned the Flames of Revolution by Nina Sankovitch

Enter the Aardvark by Jessica Anthony

Like Flies from Afar: A Novel by K. Ferrari, Adrian Nathan West (translator)

The Everlasting: A Novel by Katy Simpson Smith

The K Team by David Rosenfelt