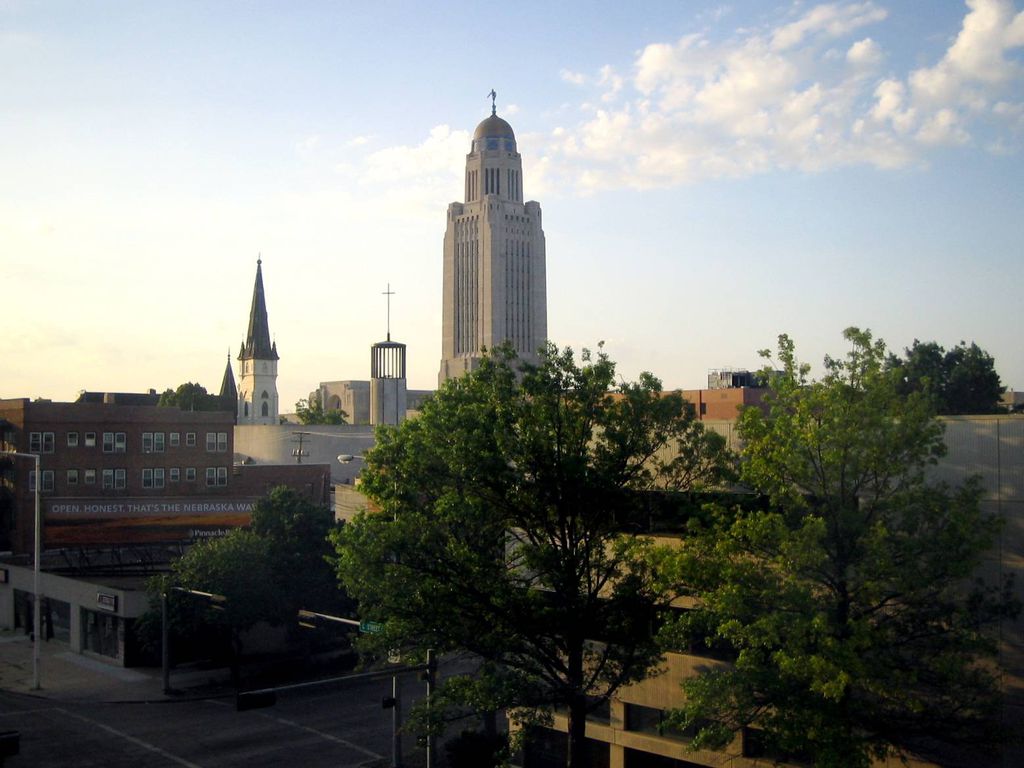 It’s not every day you hear a member of the apparent coastal elite say, “I’m moving to Lincoln, Nebraska.” But here I am, saying just that. On February 3, 2017, I got an incredible phone call. I was offered a place as a PhD candidate at the University of Nebraska-Lincoln. I was lucky enough to visit soon after, and I fell in love. The town is gorgeous, full of trees and beautiful old houses. The university was welcoming. Best of all, I saw bookstores. Plural.

For some reason, my knee-jerk elitism assumed – wrongly – that a town in a so-called flyover state would have only one. This was a very, very, very stupid assumption. Lincoln, Nebraska is the capital of its state. The university is the state’s pride and joy. And, of course, every college town needs a bunch of bookstores. It’s simple supply and demand. And while I am not really into capitalism (at all), I am into bookstores. However they come about, I’m glad.

I visited Lincoln, Nebraska again a few weekends ago, in order to find a place to live. I did, thankfully, but even better, I got to explore more bookstores. And now I’m going to share them with you. 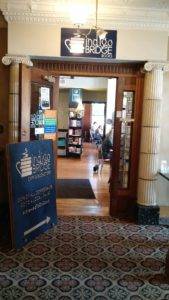 First stop is Indigo Bridge Books, in Lincoln, Nebraska’s historic Haymarket District. To paint the picture for you, the Haymarket District is a few cobblestone streets in Lincoln’s downtown. The mission statement fo the district is “a preservation of the built environment and of the human resources of the downtown or neighborhood business district.” It’s part of the National Main Street Project. All of which is to say: it’s freaking CUTE. Seriously.

Indigo Bridge Books is right in the middle of this district. It’s in a building that has a bunch of other cool businesses in it, such as an ice cream parlor and a non-profit theater. Indigo Bridge Books itself has a socially conscious mission, and believes in the ties between literature, good conversation, and activism. They’re incredible.

One example of their awesomeness is their zine section, which includes local and non-local artists’ zines, of varying states of professionalism. Another example is their staff picks section, which is full of amazing and diverse reads. 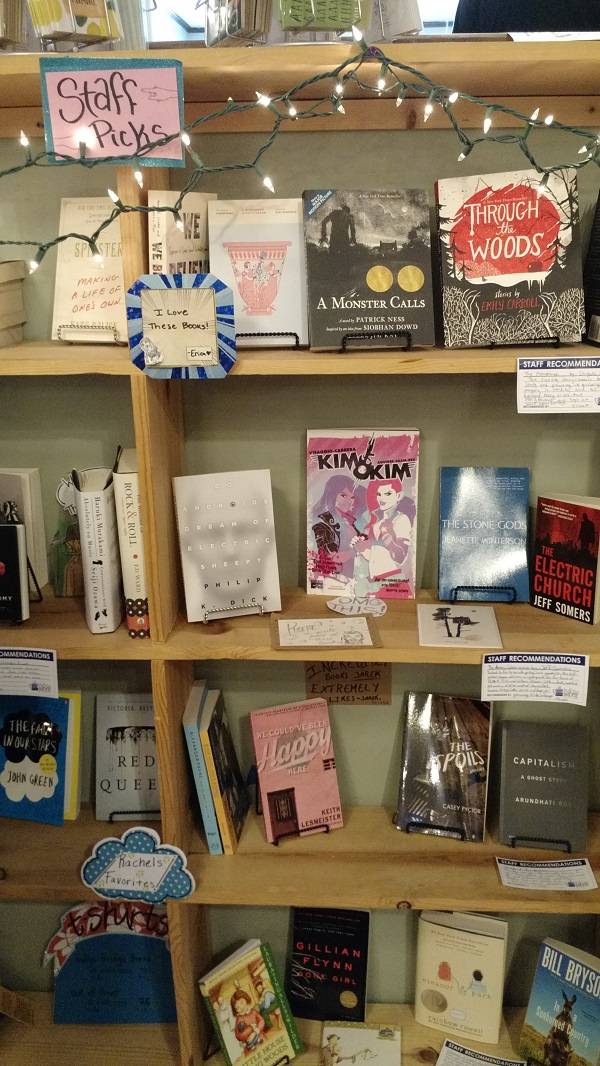 Some books you may have spotted here are: A Monster Calls by Patrick Ness, The Stone Gods by Jeanette Winterson, the comic Kim & Kim, and Capitalism: A Ghost Story by the incredible Arundhati Roy.

Not only is Indigo Books also a coffeeshop and a great space to work and study. It’s also wonderfully queer-friendly, and proves it with this “Graphic Guide to YA Novels with LGBTQ Characters”: 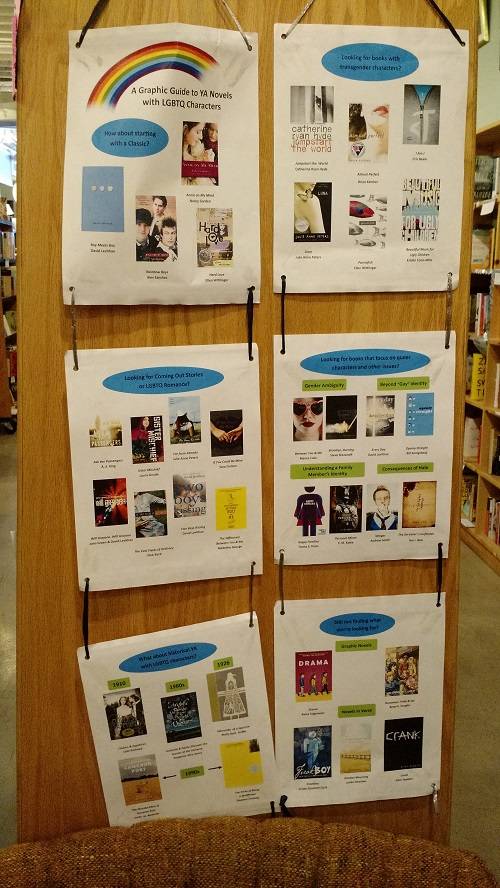 The first page on the top right asks: “Looking for books with transgender characters?” It then recommends books like Jumpstart the World and I Am J.

Can you tell I’m going to be spending lots of time here when I move? 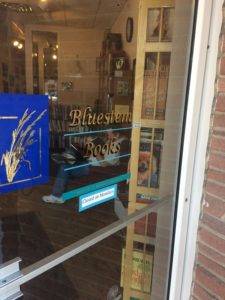 The next place I discovered while wandering around the brightly sunny May day in Lincoln, Nebraska, was Bluestem Books. Founded in 1975 as a sell-by-mail service, it’s now a large, multi-roomed used bookstore. They have a bunch of gorgeous first editions of books in glass cases, and they’re not snobs: some of those first editions are of Stephen King books! The entrance to the children’s room has a “Wombats – Next 5km” sign, while another wall has a splendidly spread out Paul Newman for Libraries poster. 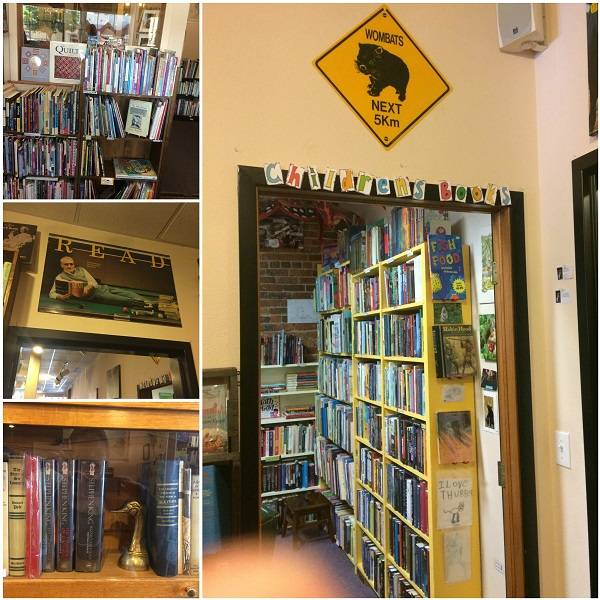 And while I didn’t take a photo of the proprietor (it felt a bit invasive), he had a dog on his lap the entire time I was in there. 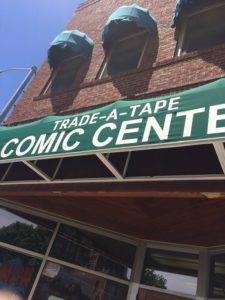 I don’t know about you, but I don’t expect to find bookstores next-door to one another almost anywhere. As a continuing corrective to my snobbish coastal self, I found Trade-A-Tape Comic Center right next to Bluestem Books! I’m not a comics aficionado (alas) but I still enjoy a good look around a comic book store. As soon as I walked in, I could tell that this place was serious. All the comics were wrapped in plastic, and there were white banker boxes behind the counter, each of which was full of collectible comics. Apparently, the trend of animals in the shop? Yeah, that’s not only Bluestem. Trade-A-Tape Comic Center had two large ginger cats sitting on the counter, and a playpen right inside the window for them. 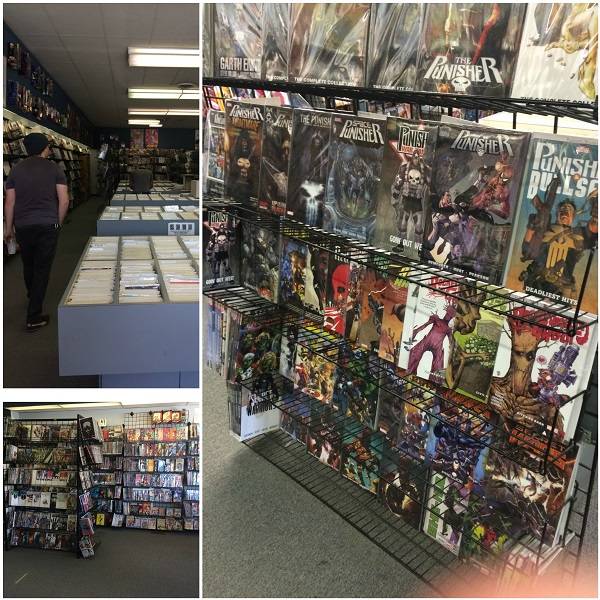 Apparently the one rack I decided to photograph is full of The Punisher comics? Oops. Honestly have no idea whether this is a good thing or a bad thing.

While I’m new to Lincoln and don’t really know my ass from my elbow around here, I do know what it feels like to stumble on a good coffee shop. My partner and I were yearning for a cuppa before our flight home to New York (soon to be not-home), and we’d already been to Indigo Bridge Books the day before. We wanted to sample another place and get a bit more of a taste of the city. So we pulled up Google (as you’d expect) and asked for some “cafe near me” recs. Crescent Moon Coffee was the closest one.

It took us a little while to find it, as it’s down some stairs and through a brick-lined hallway… and is that a vault door?! Anyway. We found it. And I’ll admit, I was turned off at first. The space was low-ceilinged and semi-empty on this Sunday at brunch o’clock and I thought it looked a bit gloomy. But first impressions, while often right, can also be super wrong. Because by the end of the hour my partner and I spent there, I’d decided it was going to become a regular hangout when we move to town. It’s not hard to guess why: 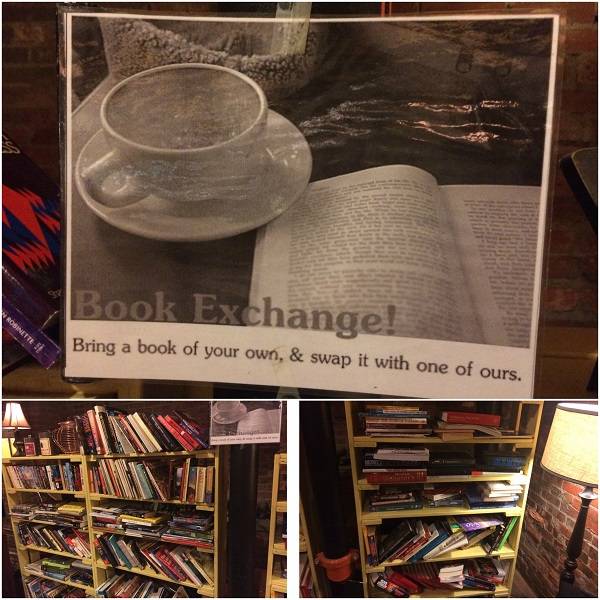 Yup. I’m very into anywhere that has a book exchange.

That’s all we had time for, unfortunately, on this past visit, but that’s not all for the Lincoln, Nebraska bookstores. One of the places I’m very much looking forward to visiting is A Novel Idea Bookstore, who have a cat as their logo, so really, there’s no way this place will be anything other than amazing. Besides, they have a show called “That’s What She Wrote” which is “a conversation about women writers [which] airs once a month on KZUM’s The Wimmin’s Show, hosted by Deb Andersen.” You know I’m going to be tuning in.

Another bookstore, Lincoln’s newest apparently, is Francie & Finch. I’m already in love with them because they write they’re “just a short story away from campus…” They understand readwalkers! And that we measure distances by reading page length! They’re lovely, and I can’t wait to visit.

That’s about it for the main general bookstores! Plus, Lincoln is home to the University of Nebraska Press, who publish some fascinating work. All in all? I’m very pleased to be moving to this lovely place.