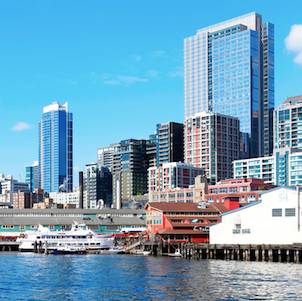 Seattle is home to an eclectic array of writers, bookstores, independent publications, and of course, a certain enormous tech firm. There’s a reason the Emerald City is being considered for UNESCO’s title as City of Literature. Despite the looming presence of Amazon, there are countless local independent bookstores in the area. I can confidently say as I write this article that I will miss several literary hubs because Seattle is indeed inundated in books.

And that’s just to name a few of my favorites. I left out a slew of secondhand bookstores and niche neighborhood independents. (Not on purpose mind you, I typed in Seattle bookstores to Yelp as a reference point and got 162 results)

Elliot Bay is the big one. Located in the heart of Capitol Hill, Elliot Bay not only boasts a gigantic book selection but also hosts regular literary events and has a bustling cafe that puts out delicious eats and a strong cup of coffee. I used to stop in this bookstore at least three days a week on my bike ride to my job downtown.

I hate picking and choosing from this list, but Bulldog News also deserves a huge shout out. For anyone still claiming that print is dead, Bulldog proves otherwise. This news stand holds over 1,000 news and magazine publications at any given time, with a rotating selection of around 3,000 regular publications. It was hard not to lose an afternoon in there. Again, the strong Seattle coffee also helped. Check them out up on UW’s campus, not a stone’s throw away from the University Book Store.

Couth Buzzard, along with 826 Seattle (aka Greenwood Space Travel Supply Co.) also deserve some recognition for the cool events they put on up in the Greenwood neighborhood. I may be a bit biased because I used to tutor at 826, but teaching kids creative writing and publishing skills is just too hip to skip.

Hugo House
The Richard Hugo House is one of the coolest resources for writers in the Seattle area. This nonprofit writing center inhabits an enormous Victorian-era home that was built over a century ago. Hugo House leads writing programs for teachers and students, as well as hosts writers-in-residency. They also host some awesome literary events.

Innumerable writers and musician come from the Seattle area. Of course, in the book world everyone knows Sherman Alexie, aka the fearless leader of Indies First. Alexie drops in on bookstores in Seattle regularly. The coolest thing he did while I was living there was a show at local venue Neumos called verse-chapter-verse, in which the hip hop duo Fly Moon Royalty does a set, Alexie does an interview/reading, and then Fly Moon did another set! Ugh, is there anything Sherman Alexie can’t do? (Man crush)

Tom Robbins has also lived in the area for a long time and notably Still Life with Woodpecker is heavily set in Seattle.

Debbie Macomber comes from a little way’s southeast in Yakima, Washington. Richelle Mead resides in Kirkland, a suburb just northeast of the city.

As far as musicians go, there’s simply too many to name. However, I think it’s worth noting that Seattle has a gargantuan music scene because I think it influences the lit scene and vice versa.

Amazon
Okay, so admittedly I might not be the best person to talk to about Amazon’s role in the Seattle literary scene. I have certain feelings on the subject, both as a former resident of Seattle and an opinionated reader. I would say the best thing to do is to read some of the awesome pieces penned in the city’s weekly publications like The Stranger or Seattle Weekly. (There’s also this.) Anyway, the Bezos behemoth is building new headquarters downtown. In the past I’ve made some immature jokes about Amazon, but in the case of this new building I will refrain. Here is the what it’s going to look like: