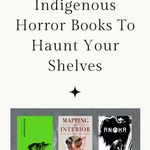 Around this time last year, fellow Book Rioter Amanda gave us a list of Indigenous horror books to read in 2020 (you can see the list here). It was the perfect kick to my reading list, especially during THAT year. Unfortunately, 2021 has not been that much better, and once again I am on the hunt for more Indigenous horror.

Horror is one of the oldest forms of storytelling, with long roots in folklore, myths, and legends. As the spawn of speculative fiction, its instinctual need is to create a feeling of fear, shock, or disgust. It can be psychological or supernatural — or both. Unfortunately, more often than not, it is white writers who emphasise the folklore and cultural symbols in their horror stories without really understanding the significance of Indigenous culture or traditions. I have read way too many books which have appropriated Indigenous stories to create “native horror tropes.” Writers can do better, and as readers, so can we.

“You never tell your mom anything that might worry her. Moms have enough to worry about already.” Yeah, thanks for bringing way too much realism to your characters, Jones. It starts as a haunted house story featuring a 12-year-old boy who suddenly sees an unknown person stepping through a doorway. A figure who reminds him of his father, who died mysteriously before his family left the reservation. As the boy tries to understand what is happening, he learns the price to pay for protecting his family. This is one of Jones’s earlier books and my fave of his collection, mainly because of his relatable characters — it just adds to the anxiety when you feel connected with the characters.

I should note here, Jones has a new book out: My Heart is a Chainsaw. I am hearing great things about this, especially from fans of classic horror movies. A broken young girl takes inspiration from classic horror movies to cope with the horror in her own life. It’s on my TBR list.

Dimaline gives us a book both rich in horror and raw in its contemporary context. The Marrow Thieves is set in a post-apocalyptic world where the Indigenous people of North America are being hunted and harvested for their bone marrow. This precious life source carries the key to recovering something the rest of the population has lost: the ability to dream. “Recruiters” seek out the Indigenous youth, knowing full well the extraction of marrow will kill them. While the horror elements are clear and strong, what really stands out is the narrative about the loss of culture and the sense of survival for one race over another.

Came for the culture; stayed because I was HOOKED on the supernatural horror themes. Like Mapping the Interior mentioned above, Butcherbird has characters you invest in. There is family history crawling across each page. The environment unfolds around you as you read, and the supernatural themes slowly unravel like twine, until you feel permanently tied to the story. Jena is the main character, a woman with a troubled history and a determination to live her life. Her immediate family died in a fire when she was young, leaving Jena and her grandmother Rose to survive. Rose sent Jena to live with her aunt without explanation. Many years later, Rose is dying, and an adult Jena has questions: about that night, about the fire, about why Jena was sent away. And about the darkness sitting on the edges of the farm. Butcherbird is subtle in its Indigenous horror, slowly blending its creepy terror with Māori heritage and lore. This is Hart’s debut novel, released August 2021, and I am totally here for more of her writing.

Hawk’s debut book of short stories was released in 2020 and brings a collection of bones, witches, werewolves, and enough historical facts to make you think twice about what you read. All of the stories lead to Anoka, a small town set in Minnesota and dubbed “The Halloween Capital of the World.” These are SHORT stories but they pack a punch. Hawk reveals his experience of being an Indigenous person in the U.S. without making the experience a horror story in itself. Instead, he uses his storytelling to explore issues like identity, grief, and loneliness. Of the collection, “Soilborne” is my…favourite? That makes it sound like I love it. *shudder* I think it would be more appropriate to say it left the greatest impression.

Sometimes the most horrifying part of the story is the reflection of real-life horror. Ghost Bird starts off feeling like a crime novel set in regional Queensland (Australia). The story takes a dark turn when Laney, an Indigenous teenager, goes missing in her hometown. The last place she was seen was near the property of a family with a history of violence and aggression towards the Indigenous community. Her “super rational” twin sister, Stacey, is determined to find Laney — especially when Stacey starts to experience supernatural events, connected with her family history and culture. This is a gritty and terrifying story that does not hide from its strong connections within Indigenous communities throughout Australia. Fuller finds the balance between supernatural and psychological horror, making it very difficult to sleep if you happen to finish reading around 1 a.m. Just saying.

Two authors bring two characters to life (so to speak) and give their unique perspective to the story. Since Beth Teller died, she has continued to “exist” for the sake of her father, a detective who is the only one who can still see and hear her. Beth is determined to help him with a new mystery surrounding Isobel Catching. The more they investigate, the more we learn about their small community and the history of tragedy and injustice for Indigenous Australians. Beth’s voice is clear and strong, albeit naive, while Isobel’s story is told through poetic prose. Compared with others, this is a short book with soft horror themes and most of the “heavy thinking” will be after you have finished.

Fans of Wagamese will know the two novellas brought together in this single volume: Him Standing and The Next Sure Thing. Both stories feature young Indigenous men who dream of better lives. The common theme is their sense of identity and their need to feel connected with their world. In the first story, Lucas is asked to carve a spirit mask for a mysterious stranger, using traditional skills he learned from his grandfather. And I will never look at a traditional wooden mask the same way again. The Next Sure Thing is centred on horse racing, where Cree Thunderboy meets a powerful man who convinces Cree to trade his skills for fame and fortune. Both stories are told in the same haunting tone, however, the bonus prize is the foreword from Waubgeshig Rice, a writer known for his own Indigenous horror books. Definitely a book worth reading twice.

This book has it all: it’s supernatural LGBTQI magical realism, with a fair blend of real-life/supernatural horror to make you question your own life choices. Pet, the titular character, is here to hunt a monster. Jam, the main character, is the poor soul who unwittingly released Pet from one of her mother’s paintings. Jam and all of the children in the city of Lucille have been taught there are no more monsters. But Pet senses a darkness and it is connected to Jam’s best friend, Redemption. As a horror novel, Pet definitely scared me both with the jump scares and in that “my brain and heart feel sick.” Like their debut novel, Freshwater, Emezi has woven Igbo folklore into their storytelling with natural ease. The companion novel Bitter expands on some character history and is scheduled for release in February 2022.

If this Indigenous horror books list doesn’t feel long enough, there’s more scheduled for 2022. Top of my wishlist is a forthcoming anthology, with Mykaela Saunders as editor. Earlier this year, Saunders had a callout for speculative fiction from Indigenous Australians — including Indigenous horror. I can’t wait to see what she found.