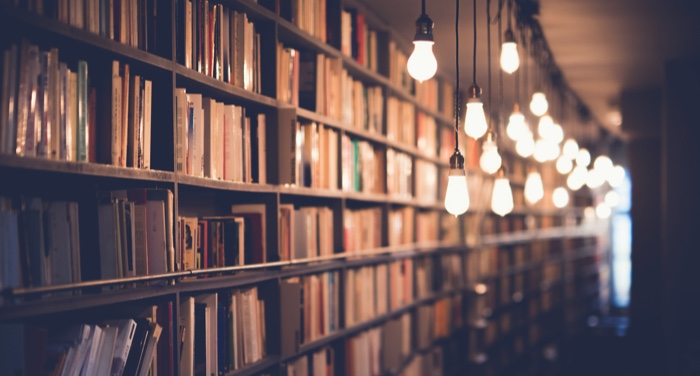 A new study from SuperSummary, an online resource that offers study guides to fiction and nonfiction, highlights how white male authors remain among the most celebrated and discussed.

The study explores the r/books forum on Reddit, which has close to 18 million members. What books and authors are mentioned the most? What topics get the community fired up? Although Reddit isn’t representative of any single group, that’s a part of the appeal for exploring it as representative of the average reader. There are certainly book industry folks in the subreddit, but the bulk of the community is the end user of books, as opposed to someone within the process itself.

Over a million comments and posts between January 29, 2008, and January 27, 2020, were analyzed using Reddit’s own API and Google’s BigQuery tool. Using bestseller lists, forum opinions, and other similar resources, SuperSummary developed a list of 250 popular and well-known authors, while they did the same for individual books, which came to a list of 300 titles.

Here’s what they found.

When Are People Talking About Books?

The study finds that the bulk of conversation on r/books happens during weekdays—with Mondays especially active—and the months of July and August saw more discussion than other months.

Ten years of posts showcased how much the r/books forum has exploded in growth: between January 1, 2010, and December 31, 2019, comments increased seven-fold, while active users increased twelve-fold. There are over 164,000 comments annually, along with over 80,000 active users.

What Authors Are They Talking About?

It comes as little surprise that white male authors form the bulk of conversation. Though the industry as a whole has become more aware of inclusivity, it hasn’t trickled down to the average reader quite the same way.

There’s likely more to this, though, including the fact that the list of authors SuperSummary elected to use when making assessments was curated via tools like bestseller lists. Bestseller lists are still representative of books seeing marketing budgets that allow them to sell well, and they will, of course, feature books by already best-selling authors. 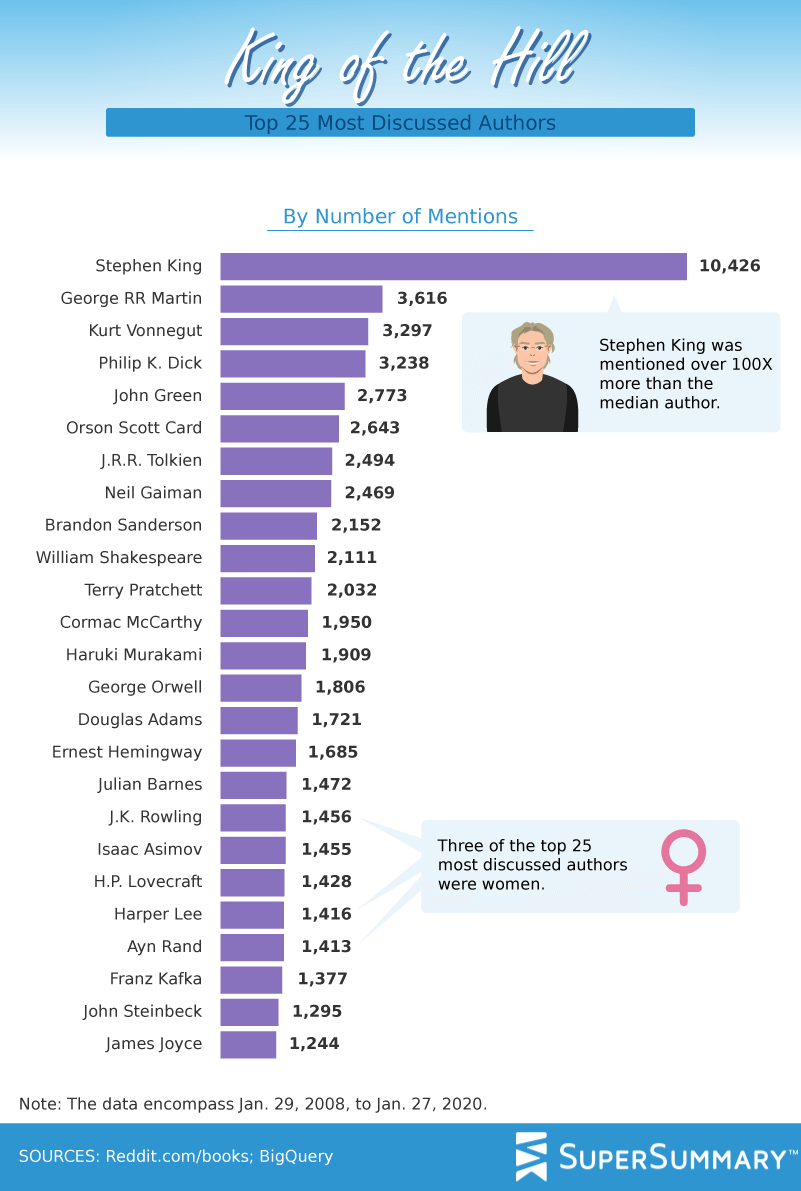 Stephen King, George R.R. Martin, and Philip K. Dick top the list, with King seeing more mentions by leaps and bounds over every other author on the list.

Though SuperSummary makes it sound as though three women cracking the top 25 list is noteworthy, it’s not. It’s sad that only three women are among the most talked about, and none of them are especially surprising. All three are also white.

Of the top 25, a mere single author of color appears: Haruki Murakami. Likewise, the majority of the authors are American.

It’s curious to wonder what the initial list of 250 authors looked like. How many were authors of color? How many were women? How many came from nations outside of the U.S.? While the list above likely mirrors the average reader’s interest in book discussion during this time frame, it’s also seriously influenced by a list determined from factors that don’t take these factors into account.

The Most Beloved Authors

Ranking what authors are most beloved, based on upvotes and positively rated comments, pushes women authors even further to the margins.

None of the three women authors achieve 50% positive comments, though J.K. Rowling’s upvoting power puts her in the same ranks as Kurt Vonnegut and even places her upvoting above J.R.R. Tolkien, who garnered the largest number of positive comments.

No women are among the most enjoyed authors, though that list is fascinating to think about: it includes the one author of color, as well as a number of authors who aren’t American. Nine out of ten of those authors write primarily speculative fiction.

What Books Do Readers Talk About Most?

The top 25 books features a mix of book series and standalone titles. It comes as little surprise by this point that the majority of the books are by white  men.

George R.R. Martin’s series tops the list, followed (far behind) by the Twilight Series, Harry Potter, and Lord of the Rings. The list includes only three female authors again: Suzanne Collins, J.K. Rowling, and Harper Lee. (Ed note: As one reader astutely pointed out, it’s four female authors, as Meyer was left out of the count unintentionally!)

Like the previous look at most positively rated authors, this list leans heavily on speculative fiction. Titles that don’t fall in that category are those most likely taught in classrooms or seen on must-read classics lists.

There is a surprising and refreshing array of middle grade and young adult books on the list, ranging from the His Dark Materials series by Phillip Pullman to The Hunger Games by Collins. All of the children’s literature that made the list, it should be noted, have been adapted to screen or film in some capacity and thus are most likely to be explored by the average reader.

The Most Beloved Books

Again analyzing positive comments alongside upvotes brings together what is a far more promising list—at least when it comes to books written by women. 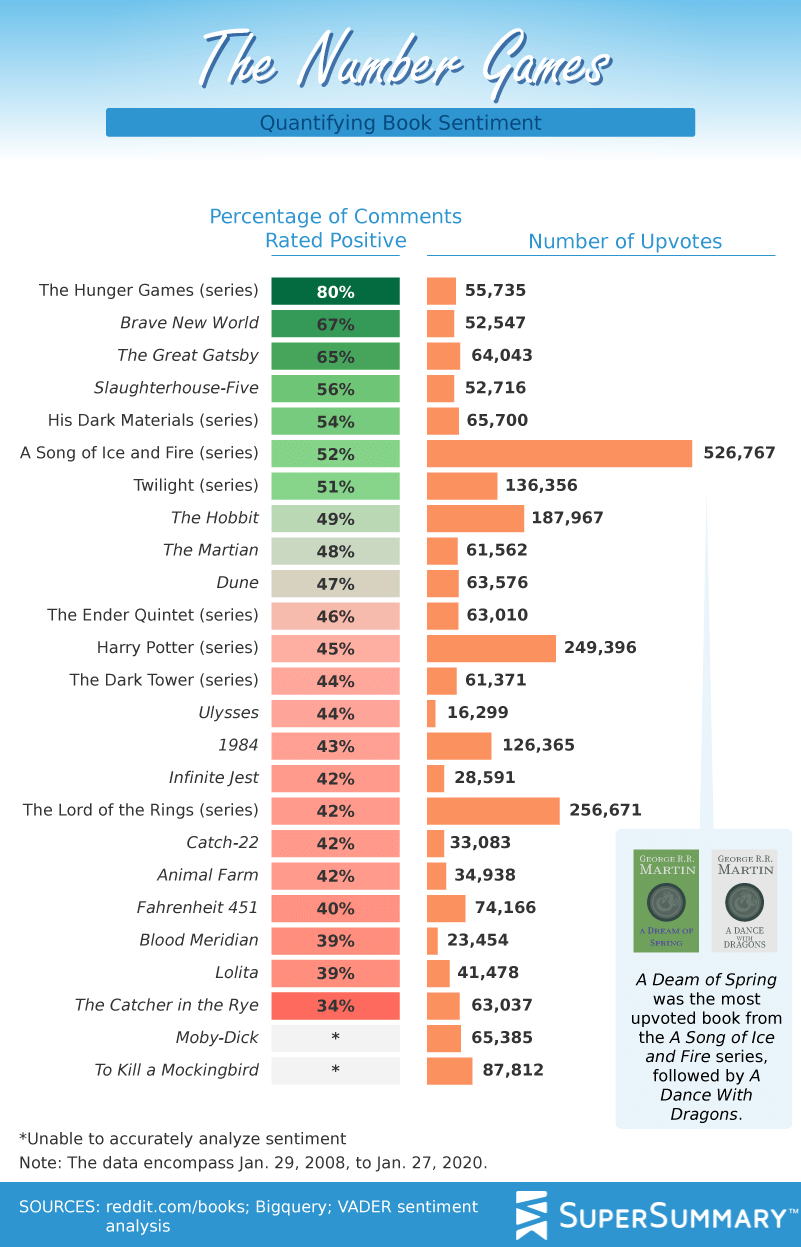 Both The Hunger Games series and the Twilight series saw over 50% of the comments about them landing on the positive scale. “Harry Potter” doesn’t fall too far behind, at 45%, while that series received one of the highest number of forum upvotes.

The chart calls out A Dream [sic] of Spring out as the most upvoted book from Martin’s series, but it does not call out the most positively commented-upon book in the Hunger Games series.

Given that the data covers 2008 to the first month of 2020, both of the sets of data on popular books make sense: major motion pictures, as well as television series, certainly impacted the general population’s reading life.

What Are Readers Eager To Pick Up?

As noted above, the way that the top books and authors were predetermined certainly played a role in what those lists looked like. But more, so does the industry more broadly, as seen in the last aspect of the study: the books the r/books community most anticipates. 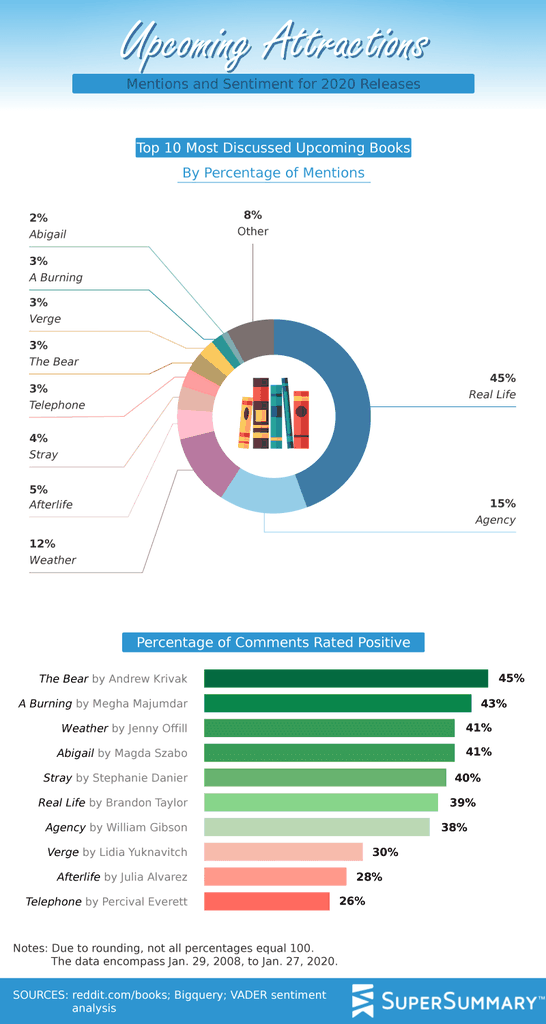 More women show up on the list of anticipated books: six out of ten were among the most positive comment recipients, representing more than half of the list.

It’s also a far more diverse list, featuring books by authors of color, as well as books far more global in scope. Brandon Taylor’s book—he is an author of color—was the most anticipated book.

When we look at the last decade, there has been a much broader conversation about inclusivity, as well as privilege and power in the book industry. This trickles down to readers, whether or not they’re aware of it.

But the reverse is true, too: the more conversations there are, the more books published and smartly marketed by women and writers of color and those existing within numerous margins, the more those books reach the hands of the average book lover.

Though r/books is one way to look at how books and authors are received, what this particular study reveals is not just that things appear to be shifting, but also we need better ways of exploring what popularity is and if it even means much more than whatever weight we choose to give it. Readers and book lovers create the parameters as much as they create the demand.

For now, it looks as though demanding inclusivity means more readers are itching to get their hands on more representative books and stories.