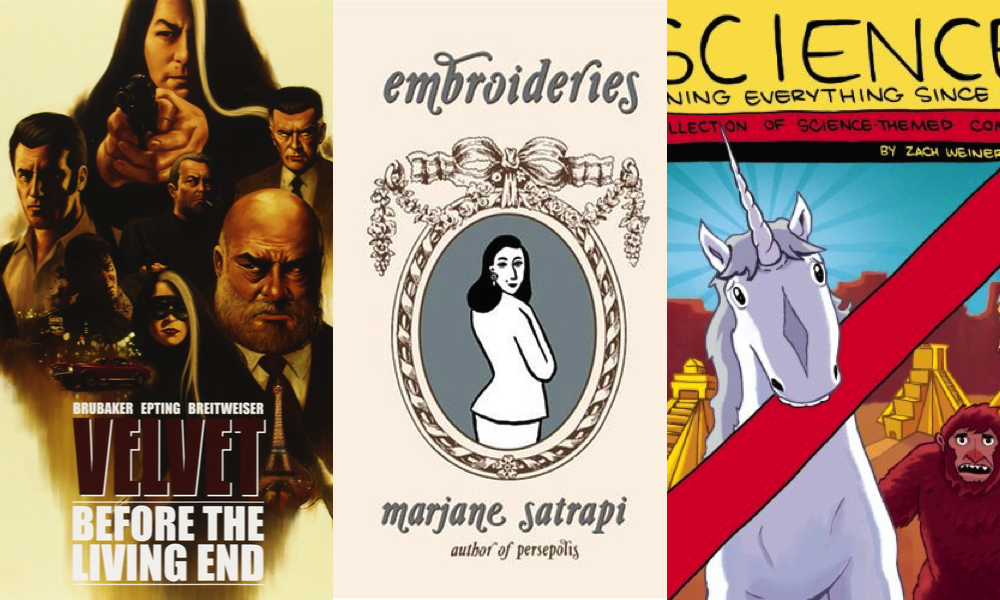 Mother’s Day is almost upon us, and if you have a mom/mother figure that you’re shopping for, Panels is here to say “Oooooh! How about comics?”

It’s kind of our thing.

Keep in mind that this list mostly assumes that the person you’re shopping for is not much of a comics reader. If they read a few, let their collection be your guide (though with its handy-dandy categories, this list might still help). If they read a lot of comics, consider a gift card to their LCS of choice instead. Buying people items in the category that is Their Thing is a dangerous gambit – the risk is pretty great that either they have it or have specifically opted not to get it. Try it at your own risk.

But if you’re shopping for someone who doesn’t have a wall of longboxes, here are some options:

Are they seriously into Ken Burns?

There are so many great history comics that I could do entire list of those alone, but for now let’s focus on these:

Hark! A Vagrant by Kate Beaton

Do they know EVERY chemistry pun there is?

Both of these recommendations are bound volumes of non-narrative webcomics. It makes for quick, casual reading and there’s tons more they can read online.

On his website, Randall Munroe describes his comic a “a webcomic of romance, sarcasm, math, and language.” I’ll own that some of the high-level math/comp sci jokes pass me by, but the comic is still damned funny. even if you don’t have opinions about Python. But if you’re shopping for a STEM-mom, they get even more jokes! Fully 30% more, probably! Oh – you should ask the to calculate it for you. They’ll love that.

Science: Ruining Everything Since 1543 by Zach Weinersmith

Weinersmith’s webcomic, Saturday Morning Breakfast Cereal, has relationship stuff and questions about the our individual significance in the world. It also has science. Like, a lot of it. This collection focuses on the science comics, as I’m sure you hypothesized from the title. (SCIENCE WORDS!)

Is it possible that they have a burner identity? You know, just in case?

How do you end up as the secretary to the head of a super-secret spy agency?  Apparently, you have things go south on you in the field, and you get benched. That’s what happens of Velvet Templeton. Then she spends a good run of years filing, typing, and being flirted at by 007-types who have no clue who she really is. The series opens with an agent dying under questionable circumstances, Velvet seeing something she shouldn’t in the files, and then getting framed for the whole thing. Now she’s on the run and investigating a mystery that could basically destroy her life. She’s badass, she’s capable, she will mess you up.

Do they prefer their media a little old school?

Because what better is there to indulge in a little nostalgia than on a sentimental holiday?

My mother takes a hardline stance against Nolan Batman, because Batman is supposed to be fun. Batman ‘66 meets that criteria easily. This is TV Batman – Adam West Batman – in comic book for form.

No matter what their age, the person you’re gifting could have Archie-based emotions. There are no shortage of options for twists, subversions, and alternate universe versions of these characters. But to really hit the the nostalgic feeling of buying a pocket-sized comic at the grocery store, I vote for one of the 1000 Page Digests.

Bonus category: If you gave them a comic about sex stuff, would you blush so hard you blacked out?

If the answer is “yes”, no shame in that. We are 100% in the same boat. Go forth, armed with the suggestions above. But if you’re gifting someone with whom you can comfortably discuss sex stuff…

Satrapi’s works are all great – Persepolis is another good history comic option – but Embroideries is something special. The book takes place, for the most part, in a sitting room in Satrapi’s grandmother’s house in Iran. It is after a lunch her grandmother has held, and now these women are sitting, drinking tea, and telling stories about their sex lives. Nothing in it is super graphic – most of the stories are just funny and cute. It’s just a group of older women talking honestly about sex and their love lives.

Now you’ve got the full list. Good luck with your gift buying, and Happy Mother’s Day!