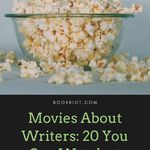 These are the 20 best movies about writers, now available to watch at home. Because now seems like a good time to have a themed movie marathon in the comfort of your own home. And why not make that theme “Movies About Writers”? After all, writing is such a solitary profession, and those of us who do it could always use the extra attention.

A few things to note about this list: they are ranked, with the best one coming in at number one. These rankings are absolutely based on my own personal preferences and biases, as is my prerogative as the writer of this list.

Also, unfortunately, a good majority of the writers on this list are white men, because Hollywood is still overrun by white men. Hopefully in a few years time, this list will start to look different. But for now, this is what we’re working with.

Speaking of movies about poets, this next one is another movie about the everyday life of a poet. Paterson (played by Adam Driver) is a bus driver and poet who lives in Paterson, New Jersey with his wife Laura (played by Golshifteh Farahanias). This is a drama/comedy directed by Jim Jarmusch.

Colette is a biographical film, directed by Wash Westmoreland, based on the life of the French novelist Colette. It stars Keira Knightley, Dominic West, Eleanor Tomlinson, and Denise Gough. Colette ghostwrites for her husband, a successful Parisian writer commonly known as Willy. But when Colette writes a semi-autobiographical novel that becomes a best-seller, tensions between the couple begin to rise.

Here we have another film featuring many real-life authors and a stacked cast. Daniel Radcliffe plays Alan Ginsberg, Ben Foster plays William Burroughs, and Jack Huston plays Jack Kerouac. Set in these three famous beat poets poets’ younger years (1944), Kill Your Darlings (directed by John Krokidas) tells the story of what happens when a murder brings these men together.

Wonder Boys is a 2000 film directed by Curtis Hanson and starring Michael Douglas and Tobey Maguire. Grady (Douglas) is an English professor and a writer who hasn’t been published since his award-winning novel that came out seven years ago. When he finds himself in the company of a new “wonder boy” author (Maguire), Grady finds all of his shortcomings and insecurities coming to the forefront.

Based on the play Quills by Doug Wright, this is the story of the final years of the Marquis de Sade’s life in incarceration in the insane asylum at Charenton. Here, he writes erotica that a chambermaid is able to smuggle out and have published for the titillation of the general public. Playwright Doug Wright also wrote the script for the film. The movie is directed by Philip Kaufman and stars Geoffrey Rush, Kate Winslet, Joaquin Phoenix, and Michael Kane.

What makes this particular movie (directed by Shari Springer Berman and Robert Pulcini) so fascinating and unique is its mixture of actors, documentary, and animation, mirroring the tone and themes of the comic book series on which the movie is based. In the non-documentary portions of the film, Paul Giamatti plays comic book writer Harvey Pekar, but the writer himself also appears in the movie.

Moving away from real authors and back to a fictional one, I bring you Young Adult, a comedy/drama directed by Jason Reitman. Charlize Theron plays Mavis Gary, a divorced writer from the Midwest who comes back to her hometown to reconnect with an old flame. The only problem? He’s now married with a family. And Mavis can’t seem to move on.

If you thought a Will Ferrell movie couldn’t make you cry, then you haven’t watched this one yet. Or maybe I just cry easily. Either way, check out this romantic drama/fantasy/comedy directed by Marc Forster. It’s about a man named Harold Crick (Will Ferrell) whose life changes forever when he realizes that his life is being written by a famous author (Emma Thompson). Maggie Gyllenhaal, Queen Latifah, and Dustin Hoffman also star.

And back we go to the biographical films. The title of the film Bright Star comes from the poet John Keats’s sonnet “Bright star, would I were steadfast as thou art.” This 2009 film (directed by Jane Campion) looks at the last three years of the life of Keats (played by Ben Whishaw) and his romantic relationship with Fanny Brawne (Abbie Cornish). Hopefully you enjoy Keats’s famous sonnet, because it will be recited throughout the film. But if you love a good sonnet and a beautiful love story, take time for this one.

This movie is very polarizing. Some people love and and others cannot stand it. I am very much in the love camp, which is why this cracked the top 10 best movies about writers (obviously). This one is a little hard to describe, but in short, this film (directed by Spike Jonze) is about a screenwriter (played by Nicholas Cage) who is trying to adapt a book called The Orchid Thief, written by Susan Orlean (played by Meryl Streep). The screenwriter in the film is Charlie Kaufman, and that is also who wrote the script for Adaptation. So yeah, get ready for a movie that’s very meta.

This next film is a classic from 1950, directed by Billy Wilder. Even if you’ve never seen the movie, you know the famous line, “Mr. DeMille, I’m ready for my close-up.” In Sunset Boulevard, a hack screenwriter named Joe Gillis (William Holden) is commissioned to write a script for former silent film star Norma Desmond (Gloria Swanson). Norma dreams of making a big comeback, but her fantasies overtake her.

This is a 2009 Spanish romantic thriller film written, produced, and directed by Pedro Almodóvar. Lluís Homar stars as a blind writer who is looking back at his life. He recalls the tragic love he had for his lead actress Lena (Penélope Cruz) who has died. Almodóvar’s films often feature screenwriters and directors as their main characters, so when choosing a film for this list, it was hard to pick just one. Ultimately, Broken Embraces won out because of the drama and romance, which makes it one of my favorites of this director’s films.

The Hours has it all. Feminism, Virginia Woolf, Nicole Kidman, Meryl Streep, Julianne Moore, LGBTQ storylines, and more…and, yes, it made me cry. Based on The Hours by Michael Cunningham, this film (directed by Stephen Daldry) is the story of three women living in different time periods and places. But what connects them is their yearning for something more meaningful in their lives.

There are a lot of biographical films on this list, but Capote (directed by Bennett Miller) makes it to the top for a few reasons. First, there’s Philip Seymour Hoffman’s Academy Award–winning performance. Also, the film wisely focuses on one period of Truman Capote’s life: the writing and researching of his nonfiction book In Cold Blood, the novel that shaped the True Crime genre. Author Harper Lee (played by Catherine Keener) also plays an important role in this story.

This adaptation of the classic Louisa May Alcott film was released at the end of 2019, and already it’s shot up to the top of this list. Why does it beat out its predecessors? Yes, it’s the excellent cast, lead by Saoirse Ronan, Timothée Chalamet, Florence Pugh, Emma Watson, Eliza Scanlen, and the queen Laura Dern. But more importantly, for the purposes of this list, it’s the ways in which director and screenwriter Greta Gerwig puts a spotlight on Jo March’s writing throughout the story, especially when she’s penning her novel. If you’ve seen this movie, you’ll know what I mean. And if you haven’t, go watch it now!

I know earlier I mentioned that writing is a very solitary profession. Well, sometimes it can be a little too solitary. That was the case for Jack Torrance, the main character in the Stephen King novel The Shining. This Stanley Kubrick adaptation takes some liberties with the original material that author Stephen King was not too pleased about. Nonetheless, this film about a writer (played by Jack Nicholson) who gets snowed in with his family in an empty hotel will forever be a classic. It’s haunting and unforgettable. And what writer can’t relate to Jack Torrance’s reaction when Wendy interrupts him in the middle of his writing process? I mean, really.

This is the second time writer Truman Capote has made it on this list. This time, as the author of the novella Breakfast at Tiffany’s on which this classic movie is based. Like The Shining, this 1961 adaptation (directed by Blake Edwards) takes many liberties with Capote’s original story. And yet you can’t deny what an important part of pop culture this film, and particularly Audrey Hepburn as Holly Golightly in this film has become.

No, Holly Golightly is not a writer, but her neighbor Paul Varjak, who is actually the protagonist and our vantage point in the film, is. Paul (played by George Peppard) moves into an apartment next to Holly’s so that he can focus on his writing, all while a rich older woman foots the bill. When he meets his neighbor Holly, however, his whole world is turned upside down. This movie gets bonus points for featuring an adorable orange cat named Cat.

But while Breakfast at Tiffany’s is a classic, it’s also problematic for a couple of reasons that can’t be ignored. First of all, Micky Rooney’s portrayal of Mr. Yunioshi is white-washing and yell0w-face and racist and anti-Japanese Imperialist propaganda. Secondly, there’s the issue of Paul Varjak. In the novella, the narrator is clearly a stand-in for author Truman Capote, who was gay. In the film, Varjak is straight-washed to become a love interest for Holly. The movie is in no way perfect, and that should be acknowledged. But I still have a soft spot in my heart for this movie.

Moulin Rouge! is not only my favorite movie about a writer. It’s my favorite movie of all time. This is another one that is very polarizing. Either you fall in love with director Baz Luhrman’s heavily saturated and surreal version of Paris, or you don’t. I’m obsessed with it.

If you’ve somehow missed this movie thus far, here’s what it’s about. Christian (Ewan McGregor) is a young idealistic poet who moves to Paris at the end of the 19th century to experience life and, more importantly, love. In Paris, he quickly makes friends with other artistic Bohemians who encourage him to write a play for the Moulin Rouge. It isn’t long before Christian begins a passionate affair with the club’s star, Satine (Nicole Kidman). This film is full of music, enthusiasm, romance, art, and, yes, a writer typing glumly on a typewriter. Of course, I cried.

Looking for more excellent book-related movie recommendations? Check out this list of 2020 adaptations. Or this list of the 8 Best Britlit Adaptations. Now go get into your comfy pants, break out the popcorn, and get watching.