*This is vague and spoiler-y all at the same time. I apologize, but you have been warned. 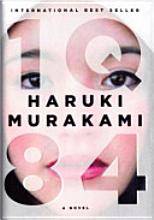 When Haruki Murakami’s 1Q84 was released, I was not sure what all the fuss was about.  Until the buzz about this, his newest book, started earlier in the summer, I had never even heard of him.  Of course, until I became a blogger, I had not heard about a lot of Asian authors, from Japan or elsewhere.  People whose opinions I trust, however, were drooling in anticipation.  I decided that I would have to give him a try, but I did not want to start with 1Q84.  What if it didn’t live up to the hype?  Instead, I fell back to my audiobook collection.

I’ve been interested in audiobooks for a long time, but I’ve only been listening for a few months. When the buzz about Murakami started over the summer, I noticed that one of his titles, Hard-Boiled Wonderland and The End of the World, was on sale.  I made the purchase, and it sat in my Audible library for weeks, until, finally, 1Q84 was released.  That’s when I started my listen.  I was warned that, perhaps, audio was not the route to take for my first Murakami. I threw caution to the wind and started listening.

At the moment that I finished it, one afternoon last week, it was the weirdest audiobook that I had ever listened to.  I don’t know that I can put my finger on what, exactly, made it so odd. I’m not sure if it was the story. I wasn’t as confused by what was going on as I had thought I might be. I also don’t think that I can explain any of it to anyone else. I know that there are unicorn skulls involved and that Murakami apparently has a fondness for plump girls that troubles him. 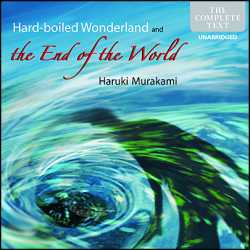 I found myself really liking the two story lines, and I appreciate the way that they merged.  At times, I found myself wishing that they had just stayed separate – as in separate books. I think each world he created had the potential to become its own story.  The link between the two could have been severed, and I would have been okay with that.

Of course, that may have been because of the narrators.  See, I get that two narrators were needed in order to make this novel work.  I don’t have a problem with that.  They were just so different, that it was hard for me to remember that they were both narrating the same book. When I figured out that both protagonists were essentially the same person (right?), I got a bit frustrated with the whole thing.

With the majority of the audiobooks that I’ve listened to, I haven’t felt as though I was missing anything.  I’ve found that it is a really good way to get to know authors that I had missed or to read the books that I keep meaning to get around to at some point. In this case, I think I might have had a better impression of Murakami and his writing had I gone with the print.  I’m intrigued by him still, but I don’t know that I’m all that impressed yet.  I’ll give him another try, but I’ll do it with a book in my hands.  And thanks to this Reading Pathways post, I know where to start.

Are there any other authors that just don’t work in audio? Who have you listened to lately?