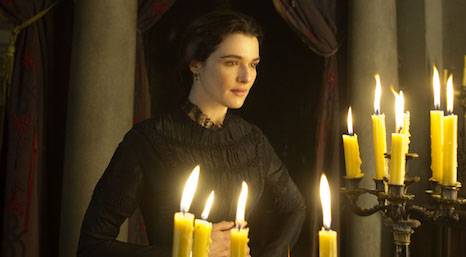 My Cousin Rachel. Like Wonder Woman! But in a subdued, tension-filled, gothic novel set in Cornwall kind of way.

The heroine’s bad. Or is she! Oh boy, you thought Wonder Woman had moral ambiguity. Wait til you’re constantly pulled back and forth in your mind about whether this woman is controlled by or controlling her circumstances!

My Cousin Rachel, out in theaters June 9, is based on the 1951 Daphne du Maurier novel of the same name, and stars Rachel Weisz, aka Slayer of Mummies, and Sam Claflin, aka the Hottest Winner of All the Hunger Games (so sayeth the books).

Claflin plays Philip, a young man of some means who is raised by his wealthy uncle in Cornwall. His uncle is ill and goes to Italy for his health (as you did in the 19th century), where he meets cousin Rachel, unexpectedly marries her, and then dies. The movie centers around Rachel’s arrival at Philip’s home in Cornwall and the mystery surrounding her motives. Is she a master manipulator, or simply a woman mourning her husband? Is she leading Philip on or has he just decided all her movements are calculated to be sexually alluring?

Here’s the thing. Because the novel is narrated by Philip, who is obviously misogynistic and xenophobic, Rachel’s motives in it seem much less clear than in the movie. The film is a decidedly feminist interpretation of the text, and therefore a very different thing, but equally as important. How many 19th century period pieces point as assuredly to the then complete lack of agency possessed by women?

Claflin plays Philip as a sulking little boy who thinks if he gives Rachel things, she will owe him, and he will own her. Not in a malevolent sense, but in a much more realistic and therefore frightening “that’s how things are so I don’t get why this is a big deal” sense. Rachel is a woman who is willing to fight to be her own person, and it is exhilarating to watch, all while you’re wondering if she is purposefully guiding events in a certain direction or not.

Shout-outs to the ever-fabulous Holliday Grainger who plays Philip’s long-time friend Louise, possessor of both excellent sense and facial expressions. The women in this film don’t charge across an embattled no-man’s land with a shield and the might of the Amazons — they inhabit a decorous and unyielding only-man’s land, and they do what they can with it. In her own way, Rachel says “NOT TODAY, SATAN” to the patriarchy, and that makes her a gd hero in my book.

You can get a copy of the novel My Cousin Rachel with Rachel Weisz’s gorgeous face on it here. Read it then read all of du Maurier. LET’S START A DU MAURIER REVIVAL UP IN HERE.