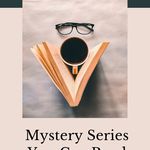 As a reader of mystery series, there are a few things that can be frustrating. One is waiting for the next book in the series to come out so you can find out what happened, especially if you are an impatient little monkey like me. (But that’s my own personal failing. Authors are not required to perform on command. It takes as long as it takes, and that’s okay.) Another frustrating thing about reading a series is when you need the next book and you can’t get it for whatever reason, whether it’s sold out at the bookstore or not available at your library. (See above: impatient monkey, me.) Which is why I am here to tell you about several great mystery series that you can read out of order. It’s so exciting! It’s like cutting the line, but without getting yelled at for doing it.

Now the first thing you should know about reading mystery series, or any series for that matter, is that there is no rule anywhere that says that you have to read a series in order. You can read any book at any time, whatever you want, if that’s what you really want to do. Read the last book first, read the second book first, go wild. It might not always make sense, and you might spoil some things for yourself, if you go back and read earlier books. But look at you go, you little rebel, you.

Another pretty loose rule about mystery series is cozy mystery series hardly ever require any kind of order. Sure, a character might be married later in the series, or is now the owner of the nail salon for raccoons where they have worked for years, but it’s not information that you really need to enjoy the story.

So here are several great series that you can read in any order, without feeling like you’ve missed out on a bunch of stuff. I’ve given a brief description of the first books and characters, but you don’t have to start there.

Jackson Brodie is a former soldier and policeman who now works as a private investigator. Jackson is very sympathetic to people’s troubles and he’s also quite fearless. He usually takes simple cases like missing pets and cheating spouses, but somehow always winds up in the middle of much larger, more dangerous cases. In Case Histories, he is investigating three very different cases that start to seem like they could have more in common than he realized.

Getty and Khan make a great team, because they trust each other implicitly. Whatever case they work, they have each other’s back. When we are first introduced to Getty and Khan, they are responding to what seems like the accidental death of a local man. But a bit of digging around uncovers the man’s history as a war criminal with ties to the Srebrenica massacre of 1995.

These intricate, bestselling novels don’t even have many characters in common. Each one is a complex, suspenseful mystery that totally stands on its own. (SPOILER: To date, the mystery we all want to know about from the first book still remains unsolved. Harumph) In the first book, Dublin Detective Rob Ryan and his partner, Detective Cassie Maddox, are called to the scene of a murder of a 12-year-old girl. And the body is in the woods where Ryan himself emerged covered in blood two decades earlier, with no memory of what happened.

The books of the most famous mystery writer in the world are all basically standalones. You do not need to know anything about Poirot and his gray cells or the little town where Miss Marple lives to enjoy them. The characters’ backstories are almost insignificant but the mysteries and the detectives’ brilliant minds are always at center stage. Christie’s first book, The Mysterious Affair at Styles, involves Poirot looking into the murder of an old friend shortly after he moves to the village.

And this is a fun new-ish cozy mystery series! At the start of the series, Lana Lee has returned home after a failed relationship and a job loss to work at her parents’ noodle shop. But when the property manager is murdered with food served to him from their restaurant, Lana must figure out who killed him to clear her family’s name. Over the series, Lana’s work arrangement and relationship status will change, but it’s never anything you must know to enjoy the mysteries.

The Murder She Wrote Novels

And just like the television show it is based on, the Murder, She Wrote tie-in novels are each like a standalone episode. Jessica Fletcher is a bestselling mystery writer who lives in the small town of Cabot Cove, Maine, and also uses her wits to solve real-life mysteries. She can’t help it — people are always dying when she’s nearby. Seriously, if you see Jessica Fletcher, run. (There’s a theory on the internet that she’s actually the most successful serial killer of all time, and it totally tracks.)

Mimi Lee runs a glamorous Los Angeles pet grooming shop called Hollywoof, where she also has a talking cat. No, really. In her first case, Mimi Lee must clear her name after a cruel breeder she tells off is found dead the next day. (People are forever needing to clear their own name in cozy mysteries. It’s kind of a thing. I suppose if I was suspected of murder, I’d do whatever I could to get off that list as fast as possible too.)

And last, but not least: Davidson has several fabulous food-based cozy mysteries with punny names, but this is the easiest series to follow if you read it out of order. Goldy Schultz is a Colorado caterer who gets in hot water in the first book in the series, when she is accused of poisoning her ex-father-in-law at a wake. Goldy must — you guessed it — clear her own name if she wants to get back to cooking anytime soon.

Put your crime-solving skills to the test with even more great mysteries! Try these new mysteries you might’ve missed in 2020 and these cozy mysteries from the first half of 2021.