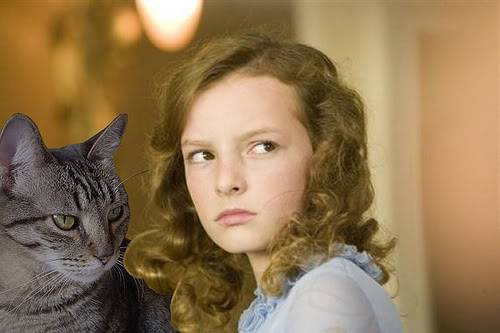 For the past few months, I’ve been on a bit of a crime fiction/thriller kick. And, this may just have to do with the order of the books I’m reading, but it seems to me there are lot of novels where the vortex-of-trouble female character has a name beginning with L. It’s not something I really noticed at first, but after the third instance I was like, “Seriously, books?” (What, you don’t talk to your books?) Some of these L-named women cause trouble deliberately, some just seem to have trouble following them around like the worst cold ever, but all of them are a source of conflict in the story for our hapless male protagonist. Also, perhaps coincidentally, many of these women are awesome and badass.

Now I can’t help but wonder if this is a thing. Does an L name automatically spell trouble in literature? Since I couldn’t stop thinking about female characters whose names started with L, I decided to compile a sample of L-named ladies. And you know what? A lot of them ARE trouble. Here’s a by-no-means exhaustive but ABSOLUTELY SCIENTIFIC list: Lisbeth Salander from Stieg Larsson’s Millenium Trilogy—Lisbeth has so many problems, I can’t even. No one in their right mind would think getting involved with her was a good idea—unless of course your name was Mikael and you lived in a crime novel. Lula Landry from The Cuckoo’s Calling by JRob Gowling—She was a gorgeous bird in a cage, just like those women in the Pre-Raphaelite paintings. But you can’t objectify a woman onto a 2-dimensional surface for years without her trying to get out and cause trouble! Liana Decter from The Girl with a Clock for a Heart by Peter Swanson—Liana is definitely a femme fatale, the college sweetheart of our protagonist, the aging George. She killed two people a few years ago and now is up to her big boobies in trouble with some nasty mobsters. And PS, would George help her out despite the gigantic “BAD NEWS” sign taped to her backside? Lorelei from Marvel’s Thor—Lorelei is an Asgardian enchantress who uses sorcery to bend men to her will and make them her slaves. No one likes that kind of behavior. Loki sometimes uses her to stir things up in Asgard, a tactic that I’m sure is pretty effective. Lyra Belacqua from Philip Pullman’s His Dark Materials Trilogy—I love Lyra, but I think we can all agree she’s a troublemaker. She never follows the rules, is defiant to all the adults, and is a pro at lying and tricking people. If she was in a crime noir novel, she’d totally be a fille fatale.

Lady Macbeth from Shakespeare’s Macbeth—I know what you’re thinking: “Cheating! Lady isn’t her name.” ISN’T IT??? What is Lady Macbeth’s first name then, hmmm? You don’t know because she doesn’t have one! Ipso facto, for all intents and purposes her first name is Lady. And if it wasn’t for her, Macbeth mightn’t have undone himself with the ambition and the killing people.

Laura Hunt from Laura by Vera Caspary—Laura’s not really a troublemaker per se, but her beauty has convinced too many men to fall in love with her. And we all know shit goes down when that happens.

Lilith from the Bible/mythology—Lilith’s the original bad news booty call. Some sort of night monster, legend says that she was either Adam’s first wife or that she raped him while he was trying to do penance for his misdeeds by wandering alone in the desert. Either way, she’s literally an evil demon whom every man should avoid and every woman already does.

Know of any other troublesome women in books whose names start with L? Share ’em in the comments!