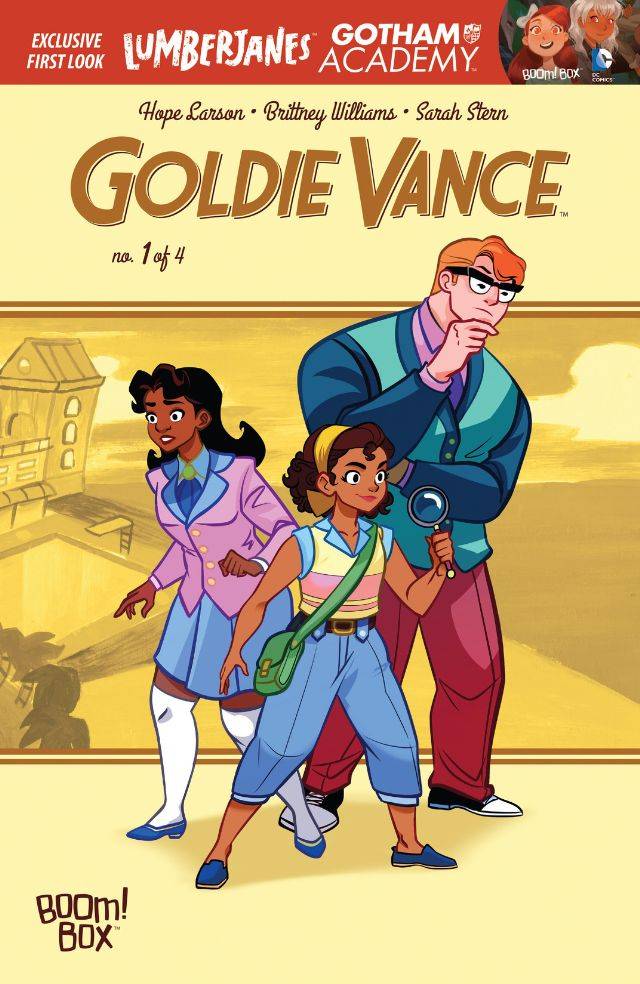 As a comics fan on a budget, I feel it’s important to cheat and occasionally blow your budget for a new mini-series. The only problem with the bending of ones own rules is sometimes BOOM! decides to release three mini-series within weeks of each other that are totally in your wheelhouse, which you end up justifying purchasing by telling yourself it’s only for a couple of issues. What’s an additional $12 for a few months? That’s nothing, you can skimp on coffee beans for a bit. So you buy the #1’s, fall head over heels for all three series, and take to Twitter, begging BOOM! for more than the four promised issues because they are just so good. Shortly thereafter, as if in answer to your tweets, BOOM! announces that your wish has come true, and all three titles are promoted to ongoing series, yay! Except, now you gotta figure out how to squeeze more books into your monthly pull list. Oh well! I’m happy to bust my budget for my new favorite friends.

Jonesy is a teenage girl who loves anime, making zines no one reads, her pet ferret, her dad and his donut restaurant, and her super secret crush which she will NEVER reveal. She also has a super secret power—she can make people fall in love with anything! Which totally sucks because love is stupid and so are other people, but at least she can make her favorite anime ship canon. From the way crushes and fandom are portrayed, to Jonesy’s dramatic narration of events and her feelings, Humphries writing makes me laugh at one panel and cover my face at the next, slightly embarrassed to feel so known by a girl with literal hearts in her eyes. Quinn’s vibrant, let’s-use-the-whole-rainbow coloring matches Boyle’s larger than life bubbly cartoon art so well, that I honestly don’t know what else to say about it, except that the only thing missing from this comic is glitter. Jonesy is a joy from the first page to the last, although she would probably be super annoyed I said that about her.

Do you love Nancy Drew and Trixie Belden? Well, start making room in your heart for a new teenage girl detective to love, because Goldie Vance is delightful. Set in a Florida resort town, Goldie Vance features an inclusive cast of characters working at the Crossed Palm Resort. In the first issue, we are introduced to Goldie Vance, a valet and self-appointed assistant detective to Walter, the actual hotel house detective, and her fellow valet Rob, who is crushing majorly on Goldie’s friend and aspiring astronaut, Cheryl. Goldie, through some smart sleuthing and totally awesome car racing skills, helps solve one case, which, of course, only leads to an even BIGGER mystery. Larson does an excellent job of introducing Goldie’s world, setting up and laying down clues to the ongoing mystery, and bringing depth to each character. Williams’ playful art shines in every panel, whether Goldie is canvassing the hotel for clues, teasing Cheryl over her space obsession, or gearing up for a race. Each character’s personality is easily picked up in just a few shots, with expressive faces that are never over-the-top cartoony. Stern’s pastel colors helps the book feel fresh and fun, and invokes a mid-century color palette without feeling like you’re reading a true period story. Which is perfect, as Goldie Vance takes place in Florida of the 1960’s, but is definitely not actually 1960’s Florida. By the end of the second issue, after spending more time sleuthing, hanging with Goldie’s friends, meeting rival’s, crushes, and being introduced to Goldie’s mom—a mermaid performer!—you’ll be left thanking Goldie Vance for filling the retro girl detective shaped hole in your heart you didn’t even know you had.

Two issues in, and Joyride feels like the SciFi YA adventure story I’ve been waiting for comics to tell. Perhaps because it was originally going to be limited series, the world building, which could have taken several issues to explore and explain, is set up in the first issue with tight, brisk, storytelling in a matter of pages. No sooner do we meet the rebellious Uma, who is determined to break herself and her thoughtful, worried pal Dewydd free of the fascist, suffocating literal bubble the people of earth now live under, then we find them actually executing Uma’s escape plan. Hats off to the writing team of Lanzing and Kelly, because at no moment did the story feel rushed to me. Sometimes, I think artists can have a hard time drawing teens that look like actual teens, but To’s art captures our teenage heroes so well, you can practically feel their youthful exuberance radiating out of each panel. The second issue, while setting up a bit more of an overarching plot, was full of fun character beats and development, so I am happily on board for the ride, ready to follow the adventures of these characters throughout space and, hopefully, to many more alien planets.