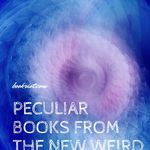 Three years ago, I wrote a beginner’s guide to the New Weird Genre, one of my favorite lesser-known fiction subcategories. This is a sub-genre that manifests the strange, the uncanny, and oftentimes the horrors of speculative works. If you’re looking for works that transcend tropes and expectations, New Weird is where it’s at. Perhaps during these times where life has already morphed into an absurd surrealist state, it’s time to delve even further into a strange speculative world. I particularly enjoy this soundbite from Robin Anne Reid, who defines the genre as “fictions that subvert cliches of the fantastic in order to put them to discomfiting, rather than consoling ends.” With that definition in mind, away we go!

Hammers on Bone by Cassandra Khaw

This one is a wonderful example of the genre’s staples: urban landscapes, Lovecraftian influences (without the racism, thankfully), and twisted atmospheres. What will strike you most about this exquisite little novella is its prose—every line is crafted to perfection to tell the story of P.I. John Persons and his investigation around a particularly dreadful monster. Both scary and beautifully written, this quick read is a perfect glimpse into the dark and weird worlds authors in this genre seek to create.

The Scar by China Miéville

Although set in the same world as his earlier book Perdido Street Station (which I also highly recommend), you can read The Scar without prior knowledge of the endlessly unique world that Miéville constructs here. Join the main character, a linguist named Bellis Coldwine, as she navigates the politics and mysteries of Armada, a floating island created by the joining of thousands of ships. Basically, this book includes some of the wildest and most creative ideas I’ve come across in speculative fiction to this day—and this book comes from the ancient time of 2003!

First, let’s talk about that cover. Genuinely beautiful. Equally striking is its insides, which contains the story of Seske Kaleigh. Seske resides in a living, breathing starship, a biological creation carved from the insides of a mythic beast. At first, things go as they always have in Seske’s stratified, tightly wound world. But of course, living in the dying carcass of a space creature comes with its fair share of problems.

The Vorrh by B. Caitling

I’ve seen “dizzying” used in several reviews of this book, and that word is right on the money. This sprawling novel delves into multiple genres—one of the signs of New Weird, of course—including history, fantasy, mythology, and more. The novel largely concerns the Vorrh itself: a large swath of forest in Africa, where the tendrils of colonialism try to breach its borders. Sometimes it includes real figures from history and other times this novel creates strange characters like a Cyclopes raised by robots. Above all else, this is a wild tale sure to leave you thinking.

This is undoubtedly one of the best horror debuts this year, though it could hold a place in many different genres. Literary fiction, magical realism, surrealism? Lakewood could settle into any of these, as main character Lena Johnson falls in way over her head. After her grandmother’s death, Lena finds her family saddled with bills that never seem to stop coming. Meanwhile, she receives a letter in the mail offering compensation in exchange for participating in a medical experiment. Though initially wary, Lena needs the cash to keep her family afloat. But as I’m sure you’ve guessed, the experiment is not without massive side effects. Besides being downright scary, Lakewood also provides a searing commentary on the racist history of medical and scientific experimentation.

The Etched City by K.J. Bishop

Besides giving us a mysterious and dark fruit-based cover years before Twilight did it, this novel brings the dark to dark fantasy. The Etched City brings readers into the city of Ashamoil, where a killer and a surgeon join forces to escape a failed revolution. Often surreal and obsessed with art and creation, this novel pulls exactly zero punches. Bishop has long been a staple of the New Weird genre, though this is her only published novel. For more of her work, check out her short stories in Ann and Jeff Vandermeer’s New Weird Anthology.

What About Media Other Than Books?

Good question! The New Weird genre is seeing a resurgence in the world of video games, actually. If you’re fine with dying quite a lot, I’d recommend Control, a recent release involving a strange office building where residents come under attack from all matter of weird phenomenon.

Enjoy your foray into the splendidly absurd, and good luck coming out the other side the same as you were before.